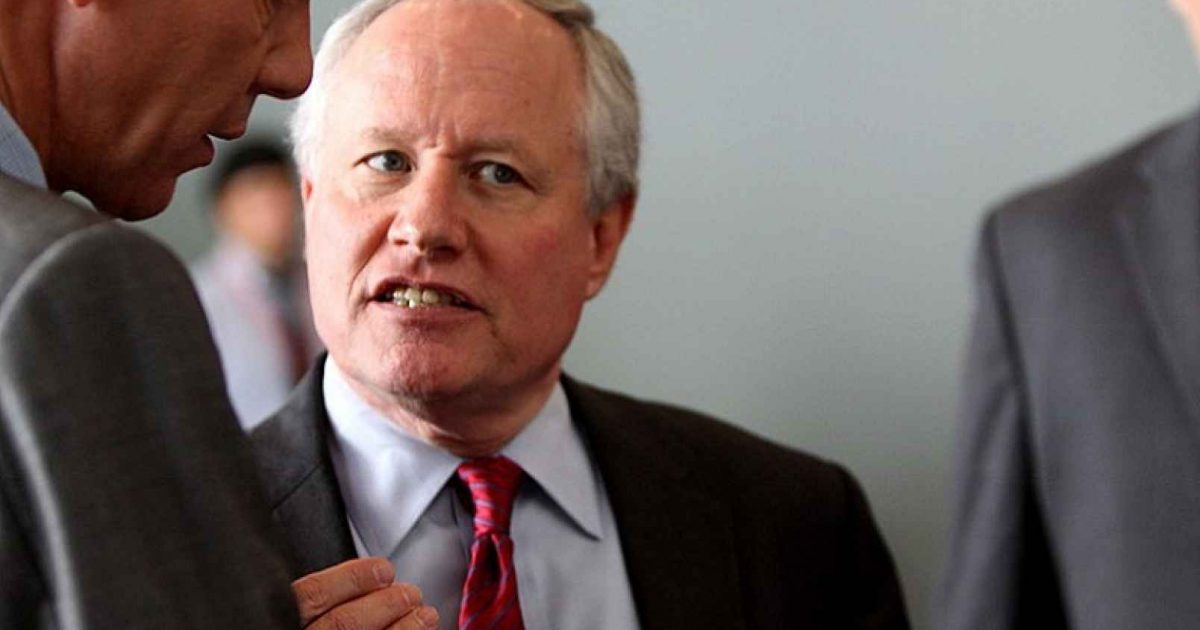 It was the summer of 2016. Trump had won the nomination, but Bill Kristol, the most recognizable figure in the Never Trump camp, was laying out a case against him that rested heavily on Russia.

“Honest and patriotic Republicans who support Trump,” Kristol urged, should review the evidence of his “many troubling connections with Vladimir Putin’s regime.”

These days, Kristol is using Defending Democracy Together, a 501c4 dark money organization of “conservatives and Republicans “, to try and primary Trump. Components of DDT include Republicans Against Putin and an analysis of Russian troll tweets. Beneath the concerns about national security and Russia, Kristol’s organization shares a funding source with a platform for the greatest Russian intel coup.

As Julie Kelly of American Greatness recently revealed, DDT is heavily funded by Pierre Omidyar’s Democracy Fund. Omidyar is a French-Iranian billionaire who is known for funding campaigns against national security, not for it. Omidyar’s best-known media investment is The Intercept, a site that does everything from distributing Qatari propaganda to defending anti-Semitism.

But it’s best known for its role as a platform distributing classified materials stolen by Edward Snowden.

Snowden, currently hiding out in Moscow, was at the heart of the most devastating Russian intelligence coup against the United States in a generation. The damage that he did to our national security, both in the surveillance of Islamic terrorists, and rival powers Russia and China, is incalculable. The Intercept was crucial in not only distributing stolen documents, but in allowing Russia’s intel coup to pass under the cover of domestic journalism and whistleblowing.

The Snowden operation has largely been occluded by a conspiracy theory hatched by the Clinton campaign that Trump was secretly working for the Russians. This conspiracy theory was fed into the Obama DOJ and was then transmogrified into the Muller investigation, and was embraced by the Never Trumpers who inveigh against Russia, yet share a common funding source with Snowden’s site.

Never Trumpers accuse Trump supporters of ignoring intelligence conclusions about Russia’s election role, yet they seem quite satisfied to ignore the House Permanent Select Committee on Intelligence’s report on Snowden, his links to Russian intelligence and the fact that his stolen information mostly had “no connection to programs that could impact privacy or civil liberties, but “instead pertain to military, defense, and intelligence programs of great interest to America’s adversaries.”

Former hawks are now reduced to being funded by a ferocious opponent of America’s military and formerly pro-Israel pundits have sunk so low as to take money from one of the leading funders of media anti-Semitismputting them in the same company as Glenn Greenwald, Max Blumenthal and assorted defenders of Hamas and Hezbollah. And yet they accuse Trump supporters of having no standards.

Omidyar’s funding of Kristol’s anti-Trump efforts is not unique. Instead, the French-Iranian billionaire has become a subtler version of George Soros, funding the organizations and outlets of the radical Left, like The Intercept, The Nation and Mother Jones, but also funding Never Trumpers.

While Kristol’s attempt to challenge Trump in 2016 came to nothing, Omidyar has also become the backer of another Never Trumper “national security” challenger in 2016.

Evan McMullin, a former CIA officer, launched an independent bid against Trump. McMullin, like Kristol, accused Republicans of being the “party of Putin”. “It’s patently clear that the president is under the influence, control of Vladimir Putin,” he claimed. At BYU, McMullin huffed about impeachment and treason. “There are things I know that I haven’t made public.”

What has been made public is that McMullin belongs to the party of Omidyar.

Like Soros, Omidyar groups love including democracy in their names even though they represent the exact opposite of democracy. Democracy means respecting election results while Omidyar’s “democracy” groups consist of Washington D.C. insiders trying to cast doubt on the outcome of an election and reverse its results, because they believe that the people should not be allowed to vote.

The National Summit for Democracy was the Omidyar equivalent of Soros’ Democracy Alliance. Despite the grandiose name, the “National Summit” apparently only managed to attract some 90 participants including Bill Kristol, Evan McMullin, Senator Jeff Flake and the Washington Post’s Max Boot.

It was hosted by Stand Up Ideas, another McMullin group, and Protect Democracy, a group of Obama’s top lawyers, led by Obama’s former Associate White House Counsel, formed to undermine Trump.

Protect Democracy, like McMullin, has been backed by Omidyar money. The summit was also backed by Rachel Pritzker, a founding board member of Soros’ Democracy Alliance. And Pritzker can be seen on social media touting one of Kristol’s Defending Democracy Together spinoffs, Mindy Finn and other Omidyar network beneficiaries. But the Omidyar presence was not hidden with an unnamed representative being quoted discussing its goals.

And in his write-up of the summit, Max Boot touted R Street as one of the groups fighting Trump.

Much of this is business as usual. Washington D.C. is full of influential and non-influential groups that no one has heard of, and that only strive to reach small numbers of people. Intraparty political conflict is often driven not by the abstractions of ideology, but by the concrete financial interests of pros who have been shut out by the candidate of their own party. That’s where the Bernie Sanders movement originally came from. It’s what sustains the professional infrastructure of the Never Trumpers beyond the punditocracy. And as Republicans donors grew reluctant to subsidize what had become a sabotage campaign against a sitting president, they turned to the radical leftist political interest that would.

But it’s particularly perverse for the Never Trumpers, a group that has made Russia and national security into the centerpiece of its anti-Trump agitation, to be taking cash from The Intercept’s backer. It’s like learning that the Moral Majority was really backed by Hugh Hefner and Larry Flynt.

It’s the rankest sort of hypocrisy that destroys the other key Never Trumper argument: principles.

If Trump isn’t hawkish enough on national security, swapping him for Pierre Omidyar is like moving to Vegas because Omaha is just too immoral.

If you truly believe that Trump’s friendliness to Russia represents a grave national security threat, why are you taking wheelbarrows of cash from the guy whose pro-terrorist site gave Snowden a platform?

The same people who inveigh against Trump for being too friendly to Wikileaks have nothing to say about their own connections to The Intercept. While Omidyar funds the “conservative” pseudo-Russia hawks, he also funds lefty Russia skeptics at The Intercept and The Nation. When a billionaire funds both Glenn Greenwald and Evan McMullin, his agenda isn’t holding Russia accountable, it’s weakening America, defeating Republicans and putting the Left in power.

But that’s consistent with Omidyar funding radical lefty elements and lefty Republicans who want to talk bipartisanship. It’s a cunning election strategy and there’s nothing illegal about Omidyar pitting Republicans against each other. But Never Trumpers are being deeply dishonest when they claim that they want bipartisanship while rubbing elbows and agendas with an uncompromising radical fringe.

The same people who will tell us that Trump is just too close to tyrants and racists for their principles have no problem sharing a funding source with a defender of Hamas and Hezbollah, not to mention a platform for the worst Russian intelligence coup against America in a generation.

And no, it didn’t involve their silly obsession with Russian trolls on Facebook.

Even their rants about the danger of foreign governments hacking the emails of party officials became a farce after the Qataris hacked the emails of Elliott Broidy, the finance chair of the Republican National Committee, and an opponent of the Islamic terror state, and The Intercept ran multiple hit pieces based on those stolen emails. But Omidyar’s Never Trumpers are okay with lefties doing it.

To paraphrase Kristol, “honest and patriotic” Republicans who oppose Trump should review the evidence and make it clear that they will no longer take money from Pierre Omidyar.

Or they are neither.

The Never Trumpers have told us that they had too many principles to back Trump. And that may well have been true of some. But the professional Never Trumper infrastructure increasingly looks like a dirty arrangement that will take money from radical anti-American lefty funders in order to defeat Trump and his conservative allies. This is not the principled conduct of men and women of character.

It’s prostitution and treason, not just to the movement they claimed to be part of, but to America.