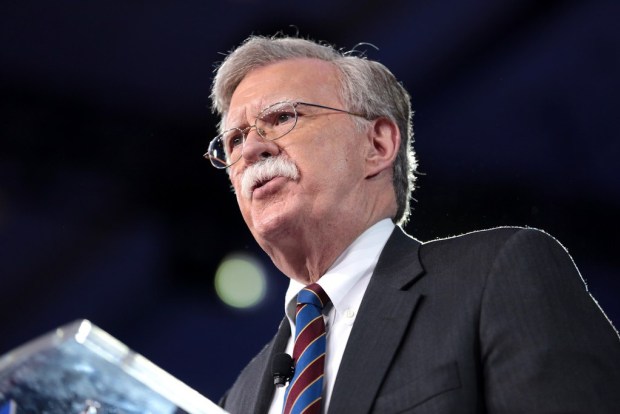 (TNS) NeverTrump GOP political strategy and frequent foul-mouthed critic of the president claims that Trump will put his former national security adviser, John Bolton, in prison following the Senate’s vote to acquit him of impeachment articles, likely on Wednesday.

In a tweet, Wilson claimed that Bolton’s only chance at remaining free is to leak the manuscript of his forthcoming book, which allegedly contains a number of bombshells regarding improprieties involving President Trump, Ukraine, and other foreign policy issues.

“As I predicted. Bolton blew his one shot,” Wilson wrote. “Unless the manuscript leaks before the vote, he’s f****d and Trump will likely use [Attorney General William] Barr to put him in prison. Just a reminder that knowing about grand strategy doesn’t mean you know about political strategy.”

As I predicted. Bolton blew his one shot. Unless the manuscript leaks before the vote, he’s fucked and Trump will likely use Barr to put him in prison.

just a reminder that knowing about grand strategy doesn’t mean you know about political strategy. https://t.co/gQuaOH9uca

Bolton became a central figure in the impeachment trial after The New York Times and other outlets reported that the longtime foreign policy hawk allegedly wrote that the president pressed him to convince Ukraine to conduct investigations into Joe and Hunter Biden in exchange for military aid.

Democrats seized on that report as ‘evidence’ supporting one of their articles of impeachment, “abuse of power.”

The president vehemently denied that he ever told Bolton that or that any such conversation occurred. Other Trump officials including his personal lawyer, Rudy Giuliani, also denied the report.

To Wilson’s prediction, Vanity Fair published a report Monday claiming that Bolton is now in Trump’s crosshairs and will be dealt with after the Senate vote:

With Senate Republicans on track to acquit Donald Trump on Wednesday, Washington is bracing for what an unshackled Trump does next. Republicans briefed on Trump’s thinking believe that the president is out for revenge against his adversaries.

“It’s payback time,” a prominent Republican told me last week. “He has an enemies list that is growing by the day,” another source said. Names that came up in my conversations with Republicans included Adam Schiff, Jerry Nadler, Mitt Romney, and John Bolton. “Trump’s playbook is simple: go after people who crossed him during impeachment.”

Several sources said Bolton is at the top of the list. Trump’s relationship with Bolton was badly damaged by the time Bolton left the White House in September. Trump has since blamed his former national security adviser for leaking details of his forthcoming memoir that nearly derailed the impeachment trial by pressuring Republicans to call witnesses. In the book Bolton reportedly alleges Trump told him directly that Ukraine aid was tied to Ukraine announcing investigations into the Bidens (Bolton has denied being a source of the leak).

The campaign against Bolton has already begun. On January 23, the White House sent a cease and desist letter to Bolton’s lawyer demanding that Bolton’s publisher, Simon & Schuster, not release the book in March without removal of certain information. Trump intends to ratchet up the pressure, and some Republicans close to the White House fear how far Trump will take things after he’s gotten off for a second time.

It’s not at all clear what crimes the Justice Department could charge Bolton with, but the closest thing would be unauthorized disclosure of classified information.

Then again, the administration has ordered Bolton and his publisher to remove certain passages in the manuscript because they contain classified information.