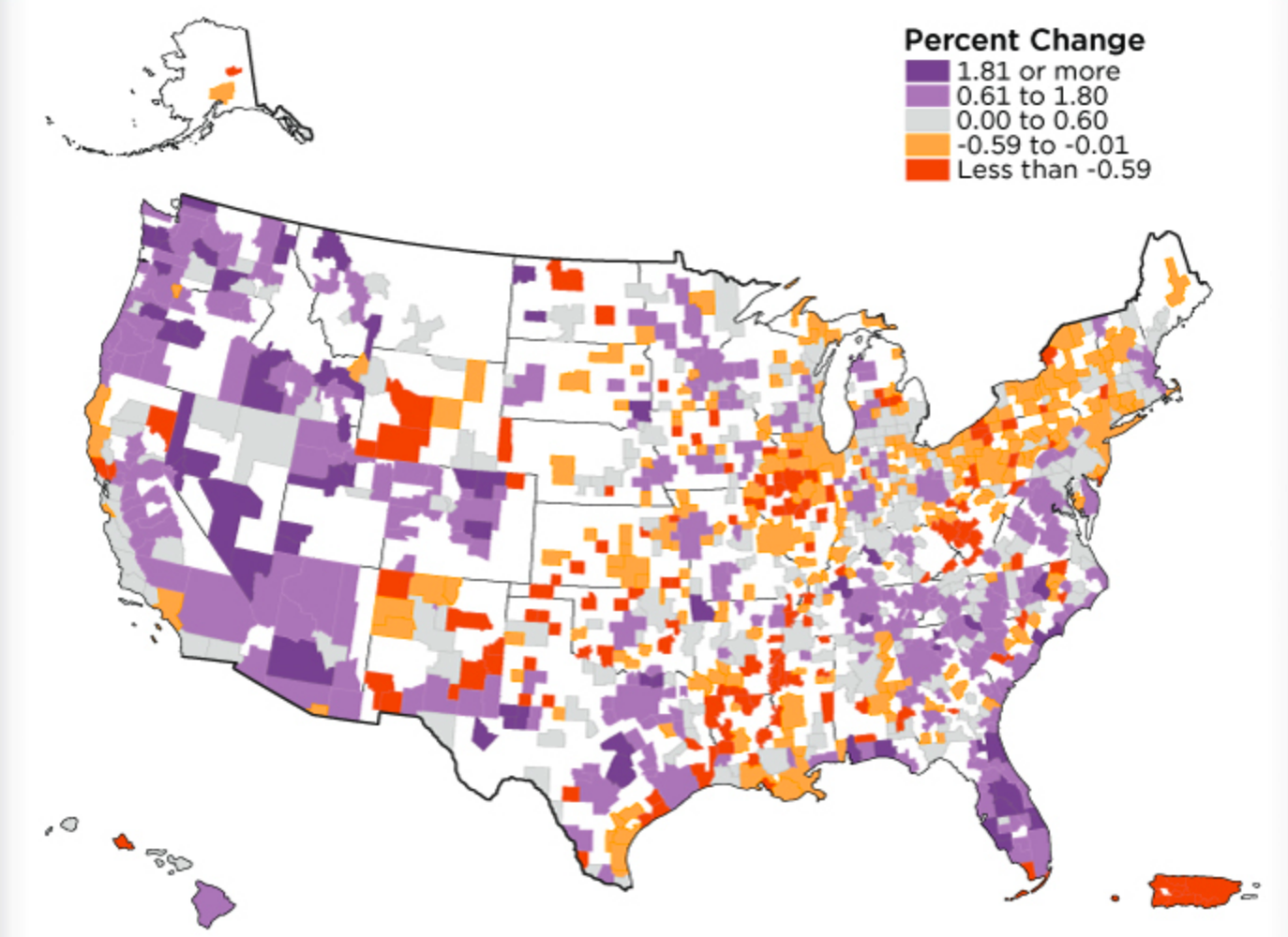 The U.S. Census Bureau has just released their annual report on how the U.S. population is shifting, and there are some very clear patterns in the data. If you look at this Census Bureau map, you will see lots of purple (areas where the population is growing) in the west and the south, and you will see lots of orange (areas where the population is declining) in the north and the east. Of course this is a continuation of a pattern that we have been seeing for decades. Given the ability to choose, many Americans would rather live in areas of the country that are warm and sunny, and that makes a lot of sense. But that is not the only pattern that we see in the data.

From July 1, 2017 to July 1, 2018 seven of the ten counties that had the largest percentage increase in population were either in Texas or Florida…

Texas and Florida do not have a state income tax, and so that could help to explain these numbers.

The top two counties on the list are both in North Dakota, and a lot of people are being drawn up there for energy industry jobs. McKenzie County produces more oil than any other county in the state, and even though it can get bitterly cold, many workers find the very high wages paid by the industry very alluring.

Meanwhile, some of the biggest cities in the entire nation are shrinking.

New York City is losing people for the first time in a decade, and the population of Chicago has now fallen for four years in a row…

The Chicago area’s population declined for the fourth year in a row in 2018, according to the latest Census Bureau estimates.

There were 22,000 fewer residents in the 14-county metro area than in 2017, a drop of 0.2 percent, and the first time since 2010 that the area’s population has slipped below 9.5 million people. Cook County, which accounts for 55 percent of the population in the metro area, lost 24,000 residents.

Considering all of the gang violence, the absolutely insane politicians and the oppressive levels of taxation, it doesn’t take a genius to figure out why people would want to leave the Windy City.

I guess the real mystery is why so many people would want to stay.

Every year, roughly 14% of the US population moves from one state to another, according to Census Bureau data. But after a careful analysis of the data from 2018, North American Moving Services published its latest report on American migration patterns…and it contained some surprising conclusions.

A quick glance at the data reveals a familiar pattern: Americans are leaving high-tax blue states in favor of red states with low taxes and low cost of living.

Hopefully the secret about how great Idaho is won’t get around too widely, because all the people from California that are moving up here have already driven home prices through the roof.

Another city that is seeing people leave in droves is Baltimore…

“Thousands of people are fleeing the city each year as total population plummets to 100-year lows. There are about 46,000 vacant rowhomes scattered throughout the area, or roughly 15% of the housing stock is dormant. On a per capita basis, the city has the highest rate of homicides per 100,000 in the country. Opioids from Johns Hopkins and the University of Maryland Medical Center continue to flood the poorest of neighborhoods, leaving the African American communities in a perpetual state of addiction, along with the need for constant government assistance programs. With the local economy basically a black market, gangs roam the streets like a third world country.”

I remember going to Orioles games as a kid, and at that time Baltimore was still somewhat of a vibrant city.

But now it is a rotting, decaying, drug-infested nightmare that is slowly dying right in front of our eyes.

And of course we continue to see an exodus from the California coastline, and one of the big reasons for that is because housing has gotten way too expensive…

A full 43 percent of Californian voters, and an astounding 61 percent of those aged 18 to 34, feel they can’t afford to live in the state, according to a recent Quinnipiac University poll. And over three-quarters of voters agree that there’s a “housing crisis.”

The median value for a house in the Golden state is about $550,000, according to real-estate website Zillow. That’s more than twice the national median.

Of course there are many other reasons to leave California as well. For much more on that, please see my previous article entitled “Nobody Does It Better: The Amount Of Human Feces On San Francisco Streets Is Going Up Every Single Year”.

Before I wrap up this article, I want to also say a bit about retirement migration.

For ages, the state of Florida has been the number one destination for retirees, but now that has apparently changed. According to Fox Business, this is the very first year that New Mexico is on top of the list…

This was the first year New Mexico topped the list. Forty-three percent of moves to New Mexico were related to retirement, while 60 percent of people moving there were between the ages of 55 and 74. The cost of living in the state is 3 percent less than the national average, while income taxes are low.

I never would have guessed that.

Perhaps the cost of housing is low and that is why a lot of retirees from California see it as a good option.

And yes, lots of Baby Boomers are still retiring in Florida, and the state is still number two on the list…

While it did not make the top spot this year, Florida ranked second with 39 percent of moves into the state being retirement related. Aside from the warm weather and beach communities, Floridians are not subject to state income taxes.

In addition to everything that I have just shared, many Americans are migrating across the country for more ominous reasons. They can see the direction this nation is headed, and they want to be positioned for what America is going to be like in the coming years.

The fabric of our society is unraveling right in front of our eyes, and a lot of people just want somewhere safe, secure and sane to raise their families.

Unfortunately that is not so easy to find anymore, and the social decay that is eating away at our country like cancer is spreading a little bit more with each passing day.