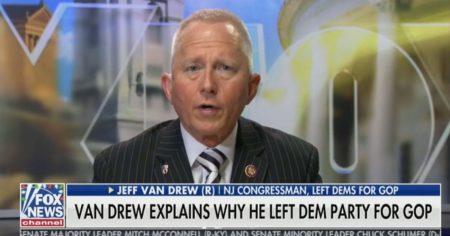 VAN DREW: “I feel good and I feel strong about it and I look forward to, you know, working with my new colleagues, and to continue to work with other colleagues as well. I do believe in bipartisanship, but I do believe there are certain basic tenants of the United States of America that are so important. The belief in American Exceptionalism, I talked about that with the president, how this is an exceptional nation, it is the best nation in the world, and you know, I was often criticized from some of my far left colleagues for saying that that it’s not the best nation in the world it’s no different than any other nation and I bring that up because in order for us to go forward, to do better to become even greater we have to have that mindset and I know that the president does that mindset. I think that that is something that we really have to obviously always believe. I think we have to believe in the fact that American people are people that just didn’t always have things given to them but that they worked hard, that they always were given opportunity, but success is something that you have to reach out for and work your sex and I think that’s really important.”

KILMEADE: “So congressman if there was no impeachment would you still be a Democrat?”

VAN DREW: “I might have been. Let me tell that story really quickly actually it’s important. So I was speaking to one of the county, I have eight counties in my district, and I was speaking to one of the county chairs and as I spoke to that chair, he said, I just want to tell you something that you absolutely are going to vote for impeachment and I said no, I’m not, I think that this is a very weak impeachment. I think it’s wasted millions of dollars, hours of time, has not been productive, has split the country apart, has caused a fractioning of the country and literally has caused civil unrest in a sense and he said well I’m telling you if you want to run in this county, you’re gonna have to vote for it, you’re gonna have to obey and the bottom line was that was the final point. There were all of these other issues and I could tell you what some of the other issues were where I believed differently but I kind of went along, but that issue really, the fact that, you almost talked quid pro quo so because I’m gonna vote in a way I don’t want to vote you’re gonna force me and then allow me to run. That’s not what America is about, that’s not what our election system should be about.”

KILMEADE: “Have you faced anger from Democrats who said I put you there as a Democrat how dare you?”

VAN DREW: “A little bit. Actually, a lot less than I thought I would. I’ve had such a good reaction and so much support and welcoming by Republicans and I didn’t know what would happen with Democrats but so many Democrats that we meet say Jeff, you know, we like you as from whatever, in any way that you run, because we know that you’re independent and we know that you believe in what you say and you do what you believe, so I think that it hasn’t been nearly as bad as they thought it might have been, but it’s a big step. A lot of people come up to me and say boy, you know, it took a lot of I guess fortitude is a nice way to say it to go forward and do this, and I believe strongly in what I did. I hope to really work well with my Republican colleagues. I want to achieve greatness, I want to help the president. I think we can have a wonderful year in 2020.”