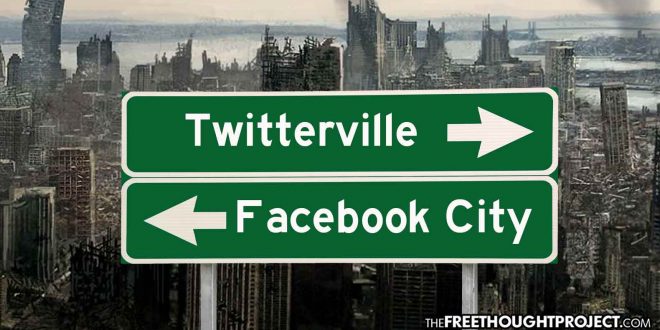 Tech companies have been in the news lately for all the wrong reasons. From social media censorship to the attack on private investors by trading apps, it’s a veritable futuristic David versus Goliath. Because they spend millions on lobbying, these tech giants have long enjoyed protection and special privilege from their puppets in government. But new legislation in Nevada just took the already insidious relationship between corporate and state and made it look like child’s play.

If your corporation has enough money, it could soon be its own government, on its own land, thanks to some particularly ominous legislation out of Nevada. What could possibly go wrong.

Sisolak announced plans for these Innovation Zones in January, however, exactly what they were and how they would work was unclear. But thanks to the tiresless work of the folks at the Journal, we now have an idea.

According to a draft of the proposed legislation, obtained by the Review-Journal but not yet introduced in the Legislature, Innovation Zones would allow tech companies like Blockchains, LLC to effectively form separate local governments in Nevada, governments that would carry the same authority as a county, including the ability to impose taxes, form school districts and justice courts and provide government services, to name a few duties.

Sisolak pitched the concept in his State of the State address as his plan to bring in new companies that are at the forefront of “groundbreaking technologies,” all without the use of tax abatements or other publicly funded incentive packages that had previously helped Nevada bring companies like Tesla to the state.

While attracting businesses to the state without throwing taxpayer dollars at them is a good thing, the way this will be carried out is certainly not good. Allowing corporations to form and then act as their own government, with the full authority of government, is the definition of fascism.

The draft language of the proposal, as reported by the Journal, says that the traditional local government model is “inadequate alone to provide the flexibility and resources conducive to making the State a leader in attracting and retaining new forms and types of businesses and fostering economic development in emerging technologies and innovative industries.”

It adds that this “alternative form of local government” is needed to aid economic development within the state.

These new “alternative” means involves the de facto creation of a corporatocracy — otherwise known as a society or system that is governed or controlled by corporations.

According to the Journal:

The zones would initially operate within the local county where they are located but would eventually be able to take over the duties of those counties and become an independent governmental body.

The zones would have a three-member board of supervisors that would carry the same powers as a board of county commissioners. And the company or firm applying for the zone would have significant say over who would sit on that board.

If these corporations wish to have their own government some day, they must have $250 million on hand to buy the previously publicly owned land and then a plan to invest $1 billion over the next 10 years into the zone.

To be clear, this is not “privatization.” This is corporatization which is not regulated in the free market as the corporations can and likely would implement laws which benefit them directly.

One of the companies who is already making a move to become their own government is Blockchains, LLC the tech firm owned by lawyer and cryptocurrency millionaire Jeffrey Berns. In 2018, Berns bought an area of land in Nevada which is larger than the size of Reno. Berns has donated heavily to getting Sisolak in office, which is a likely move to position himself into one of these innovation zones.

Berns’ plan seems pretty awesome on the surface as he imagines a sort of experimental community spread over about a hundred square miles, where houses, schools, commercial districts and production studios will be built. The centerpiece of this giant project will be the blockchain.

A government run on the blockchain would be entirely transparent and sounds fantastical. However, granting authority to entities — which allows them control over the lives of others — simply because they have a billion dollars, sounds like a recipe for disaster.

Matt Agorist is an honorably discharged veteran of the USMC and former intelligence operator directly tasked by the NSA. This prior experience gives him unique insight into the world of government corruption and the American police state. Agorist has been an independent journalist for over a decade and has been featured on mainstream networks around the world. Agorist is also the Editor at Large at the Free Thought Project. Follow @MattAgorist on Twitter, Steemit, and now on Minds.
@@MattAgorist\
(Visited 8 times, 1 visits today)
Share
Tweet
Share
Pin