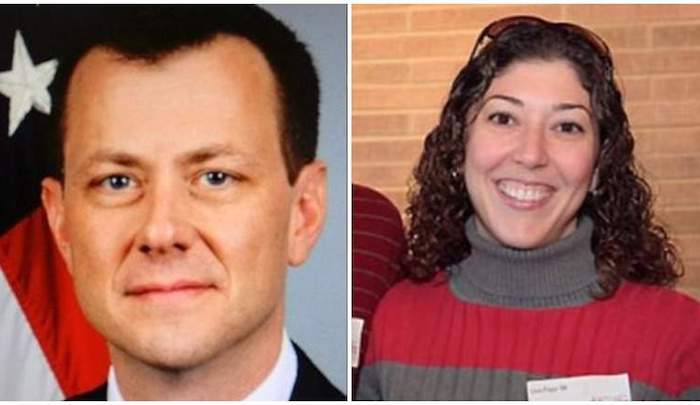 The first set of messages indicate that Strzok and Page were strategically leaking information to the media so they would publish stories, which the FBI could then refer to on their application to the FISA Court for a warrant to surveil Carter Page.

April 10, 2017: Strzok texts Page telling her, “I had literally just gone to find this phone to tell you I want to talk to you about media leak strategy with DOJ before you go.”

April 12, 2017: Strzok texts Page and tells her that two new articles would be coming out about her “namesake,” a reference to Carter Page. He adds, “One is worse than the other.”

The article, citing “law enforcement and other U.S. officials,” reported that the DOJ and FBI had convinced a FISA judge there was “probable cause to believe Page was acting as an agent of a foreign power, in this case Russia.”

Other documents indicate DOJ officials, specifically Andrew Weissmann [now part of the Mueller team] participated in unauthorized conversations with the media during this same time period.

Meadows wrote to Rosenstein to ask him to “review text messages, emails and other communications from various FBI and DOJ officials that might provide critical insight into the backdrop of the Russia investigation.” Good luck with that Congressman.

Strzok struck back through his attorney, Aitan Goelman. He put out the following statement.

The term ‘media leak strategy’ in Mr. Strzok’s text refers to a Department-wide initiative to detect and stop leaks to the media. The President and his enablers are once again peddling unfounded conspiracy theories to mislead the American People.

The second set of texts between Page and Strzok occurred on December 15, 2016.

Page: Oh, remind me to tell you tomorrow about the times doing a story about the rnc hacks.

Strzok: And more than they already did? I told you Quinn told me they pulling out all the stops on some story…

(A source told Fox News that Quinn likely refers to Richard Quinn, who served as the chief of the Media and Investigative Publicity Section in the Office of Public Affairs.)

Strzok: Think our sisters have begun leaking like mad. Scorned and worried, and political, they’re kicking into overdrive.

(“Sisters,” I heard on a Fox News report, may be a reference to the CIA.)

This same day, there were several media outlets reporting that “U.S. intelligence officials were convinced that Russian President Vladimir Putin was personally involved, and approved Russian meddling in the 2016 presidential election.”

We return to Strzok and Page:

Strzok: And we need to talk more about putting C reporting in our submission. They’re going to declassify all of it…

Page: I know. But they’re going to declassify their stuff, how do we withhold…

Strzok: We will get extraordinary questions. What we did, what we’re doing. Just want to ensure everyone is good with it and has thought thru all implications. CD should bring it up with the DD.

A source told Fox News “that “C” is likely in reference to classified information, whereas “CD” is Cyber Division, and DD could refer to former FBI Deputy Director Andrew McCabe.”

These text messages add to the growing case against Strzok and Page. The two officials, along with many of their colleagues, clearly abused their power and conspired to remove President Trump from office.

But, over the last year, a hundred equally damaging pieces of evidence have come to light. Strzok has been fired from the FBI. Page is out. Andrew McCabe has been fired and many other officials who were involved in this fraud upon the American people have either been fired or have resigned. Yet Mueller’s investigation continues.

Last week, rumors swirled that Trump was going to declassify critical documents that have been withheld from Congress by the DOJ and the FBI, as soon as last weekend or early this week. So far, nothing has happened.

Trump obviously realizes the stakes of the upcoming elections. He tweets about it. He addresses it at his campaign rallies. And he alone has the constitutional power to declassify the relevant documents that will show Americans how he was framed by a large group of men and women at the very top echelons of the Obama DOJ and FBI. Do it, President Trump.

Elizabeth Vaughn is a conservative political blogger and mom of three residing in southern Connecticut. Following a career in the financial services industry, she has been a regular contributor to conservative websites. Contact her at eliza.vaughn13@gmail.com.