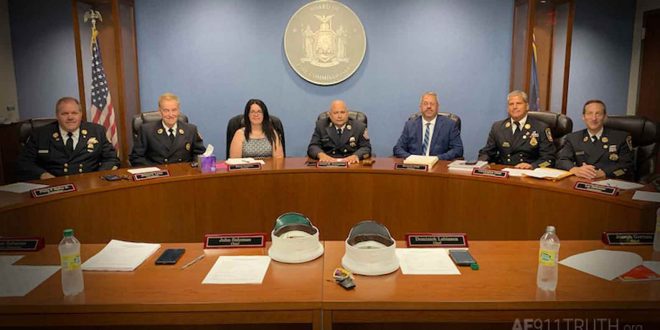 “We’re A Tight-Knit Community And We Never Forget Our Fallen Brothers And Sisters. You Better Believe That When The Entire Fire Service Of New York State Is On Board, We Will Be An Unstoppable Force,” Said Commissioner Christopher Gioia, Adding, “We Were The First Fire District To Pass This Resolution. We Won’t Be The Last.”

The importance of this resolution — especially coming from a legislative body of firefighters — cannot be understated. The impact of first responders calling for a new investigation over the use of explosives is massive. The naysayers who call those who question the official narrative “kooks” will have a hard time going after fire commissioners.

This move is yet another blow to the highly questionable and hole-filled official narrative. As TFTP reported earlier this year, in another major move from the great folks over at the Lawyers’ Committee for 9/11 Inquiry, Architects & Engineers for 9/11 Truth, and 9/11 victim family members Robert McIlvaine and Barbara Krukowski-Rastelli, a joint federal lawsuit has been filed to assess any evidence the FBI may have known about that contributed to the destruction of the towers on 9/11 which they may have kept from Congress.

Also, as TFTP previously reported, a monumental step forward in the relentless pursuit of 9/11 truth took place last December when a United States Attorney agreed to comply with federal law requiring submission to a Special Grand Jury of evidence that explosives were used to bring down the World Trade Centers. Then, in March, the group behind the submission, the Lawyers’ Committee for 9/11 Inquiry, announced the filing of a “petition supplement” naming persons who may have information related to the use of said explosives.

According to Architects and Engineers for 9/11 Truth, the 33-page document contains 15 different categories of persons who may have information material to the investigation, including contractors and security companies that had access to the WTC Towers before 9/11, persons and entities who benefited financially from the WTC demolitions, and persons arrested after being observed celebrating the WTC attacks.

A names-redacted version of the petition supplement, which was filed with the U.S. Attorney for the Southern District of New York on February 14, 2019, has been made available to the public. The un-redacted version filed with the U.S. Attorney today will remain undisclosed in the interest of maintaining the secrecy, security, and integrity of the grand jury proceeding.

As TFTP reported in December, for the first time since 9/11 the federal government is taking steps to hear evidence that explosives may have been used to destroy the world trade centers.

The Lawyers’ Committee’s April 10th 52-page original Petition was accompanied by 57 exhibits and presented extensive evidence that explosives were used to destroy three WTC Towers on 9/11.That evidence included independent scientific laboratory analysis of WTC dust samples showing the presence of high-tech explosives and/or incendiaries; numerous first-hand reports by First Responders of seeing and hearing explosions at the World Trade Center on 9/11; expert analysis of seismic evidence that explosions occurred at the WTC towers on 9/11 both prior to the airplane impacts and prior to the building collapses; and expert analysis and testimony by architects, engineers, and scientists concluding that the rapid onset symmetrical near-free-fall acceleration collapse of these three WTC high rise buildings on 9/11 exhibited the key characteristics of controlled demolition. The July 30th Amended Petition included the same evidence but also addressed several additional federal crimes beyond the federal bombing crime addressed in the original Petition.

Matt Agorist is an honorably discharged veteran of the USMC and former intelligence operator directly tasked by the NSA. This prior experience gives him unique insight into the world of government corruption and the American police state. Agorist has been an independent journalist for over a decade and has been featured on mainstream networks around the world. Agorist is also the Editor at Large at the Free Thought Project.
(Visited 4 times, 1 visits today)
Share
Tweet
Share
Pin