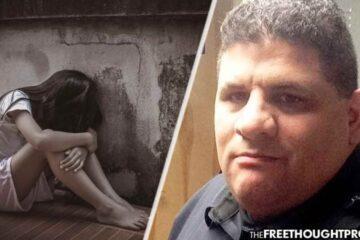 Queens, NY — Six sex traffickers were arrested this week for running a Queens-based sex trafficking ring which trafficked young women and children from Mexico into the US. One of those indicted in Brooklyn federal court was a Putnam County police officer who was protecting, not the children, but the child sex traffickers — in exchange for sex.

Wayne Peiffer, a Village of Brewster police officer has been helping human traffickers smuggle in children and younger women from Mexico for years. The sadistic human smuggling scheme has been in operation for nearly two decades since at least 2002, according to the US Attorney’s Office for the Eastern District of New York.

According to the indictment, Peiffer protected the child sex trafficking ring in exchange for sex with the victims. For years, Peiffer helped the ring avoid arrests, tipped them off to stings, and allowed them to abuse children and young women by exploiting the trust in his badge.

According to the complaint, in exchange for the protection, Peiffer had his way with the trafficking victims, even bringing them to the police station where he would rape them.

“The individuals named in the indictment were part of an elaborate network of conspirators that used deception and coercion to sell dreams of a better life in the United States to young and impressionable women, who arrived only to be forced into a miserable life of torment, sexual abuse and prostitution at the hands of their captors,” stated HSI Acting Special Agent-in-Charge Ricky J. Patel. “The criminal organization also allegedly retained the services of a corrupt cop, who betrayed the badge and the people that he swore to protect by being complicit in these deplorable acts and accepting payments in sexual favors.”

Sadly, many victims of sex trafficking have similar stories of police officers protecting their captors.

TFTP covered a shocking report from the Hawaii State Commission on the Status of Women paints that painted a disturbing picture of law enforcement and their role in sex trafficking. The report found that instead of preventing child and adult sex trafficking, many police officers are participating in it.

The report is titled “Sex Trafficking in Hawaii: The Stories of Survivors,” which detailed the testimonials from multiple victims. One particularly disturbing part of the report was the fact that almost half of all the victims interviewed reported that police officers participated in their abuse and victimization.

While the idea that police officers are abusing victims of sex trafficking may seem outlandish to some, it should come as no surprise to those who’ve been paying attention.

Police officers using their power to exploit human trafficking victims is a common thread among many cases. On multiple occasions, the Free Thought Project has reported interviews of former child sex trafficking victims who’ve all noted that they had nowhere to go as police and high-level politicians all participated in the abuse.

TRENDING: What The Media Is Not Telling You About The Captured Afghan Terrorist And Where He Learned His Terror Trade