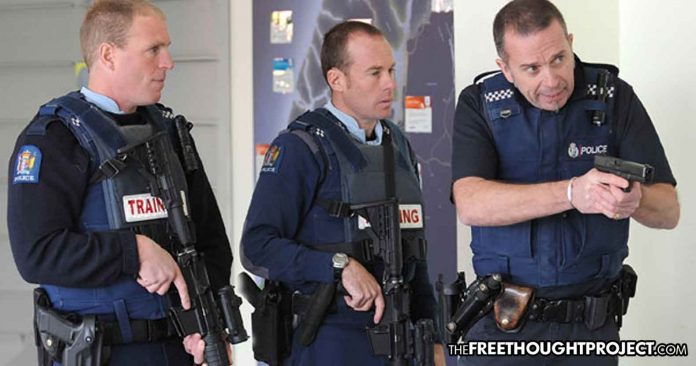 It took police officers in New Zealand 36 minutes to catch the terrorist who murdered 50 people in two Christchurch mosques last week. Dramatic footage shows that just two officers—only one of whom had a gun—apprehend the suspect after his bloody rampage. We are now learning that this response time would have been longer, but police happened to be conducting a drill nearby practicing for a similar attack.

In what can be described as an extremely strange “coincidence,” Chris Cahill, a detective inspector who is president of a local labor union for police officers, explained that officers were involved in a drill near the city center when the shooting broke out.

According to the NY Times,

Mr. Cahill said it normally would have taken longer, with team members summoned to a police station to suit up. On Friday, though, they happened to be in a training session in the city center and wearing their gear, he said.

“Any police force in the world — to get to the scene in six minutes, a specialist team there in 10 — that would be a success,” Mr. Cahill said.

Police in New Zealand don’t typically carry firearms, much less dress in tactical gear, so officers holding a drill with all their tactical equipment and weapons at the ready was a helpful coincidence indeed.

For those who may be unaware, the significance of the drill is important due to the fact that most terror attacks in recent history have coincided with drills very similar to the actual terrorism that unfolds.

In November of 2015, during the tragic attacks on Paris, it was later reported that Paris-area emergency personnel and ambulance crews were taking part in a simulated emergency exercise on the very same day. The exact nature of the drill was a simulated mass shooting attack, according to Dr. Mathieu Raux, emergency room chief at the Pitié-Salpetrière hospital in Paris.

Also, during the 9/11 attacks on the U.S., North American Aerospace Defense Command’s (NORAD) was in the midst of a training exercise called Vigilant Guardian, which “coincidentally” simulated planes being hijacked by terrorists.

A story in Aviation Week made clear the connection between the 9/11 attacks and the NORAD drills taking place at virtually the same moment:

“Part of the exercise?” the colonel wondered. No; this is a real-world event, he was told. Several days into a semiannual exercise known as Vigilant Guardian, NEADS was fully staffed, its key officers and enlisted supervisors already manning the operations center “battle cab.”

In retrospect, the exercise would prove to be a serendipitous enabler of a rapid military response to terrorist attacks on Sept. 11. Senior officers involved in Vigilant Guardian were manning Norad command centers throughout the U.S. and Canada, available to make immediate decisions.

As if these two events weren’t a strange enough “coincidence,” the London subway attacks on 7/7 also encompassed drills happening only days prior to that terrorist attack.

A report by the Daily Mail stated:

Police completed a terror training exercise, which envisaged an attack on London’s transport network just days before the 7/7 atrocity, an inquest heard today.

During the ‘table top’ drill, officers were asked to respond to imaginary bombings at Waterloo, Embankment and St James’s Park Underground stations.
But there was absolutely no intelligence at the time to suggest such an attack was imminent, the hearing was told…

Christopher Coltart, barrister for some of the bereaved families, told the inquest the ‘Hanover’ exercise, which took place on July 1 and July 2 2005 and involved officers from the Met’s anti-terror branch, ‘had at its core, an attack on the Underground’.

Asked if it was simply a ‘coincidence’ that this took place just days before 7/7, Mr Allison replied: ‘That’s entirely correct.’

It seems odd that some of the most prolific terror attacks in recent history all share this common thread.

This tragic event in New Zealand is already being used to go after free speech and gun rights. The New Zealand government began arresting people for sharing the video of the shooter’s live stream as well as pushing new gun laws.

Another particularly strange coincidence is the fact that 30 survivors of the Parkland shooting traveled to Christchurch last July. The purpose of that trip, according to Sandi Davis, a sociology teacher at Stoneman Douglas, was a way to help the students cope with the tragedy they experienced and also as a way for them to learn how to sustain the anti-gun violence movement they had begun in the Parkland shooting’s aftermath.

Parkland students mourn for friends made in Christchurch.

“It’s kind of like the same feelings as when our school shooting happened." https://t.co/b7KJKHq9An

The prevalence of terror drills, which mirror the actual terrorist attacks, being run in such close proximity to the actual events taking place begs the question of whether these drills mirroring actual events are truly just a “coincidence,” or are perhaps an indication of something much more sinister. Either way, this terrorist scumbag who murdered innocent people will have his plans of stoking hatred and divide come to fruition as the media and government play right into his plan.