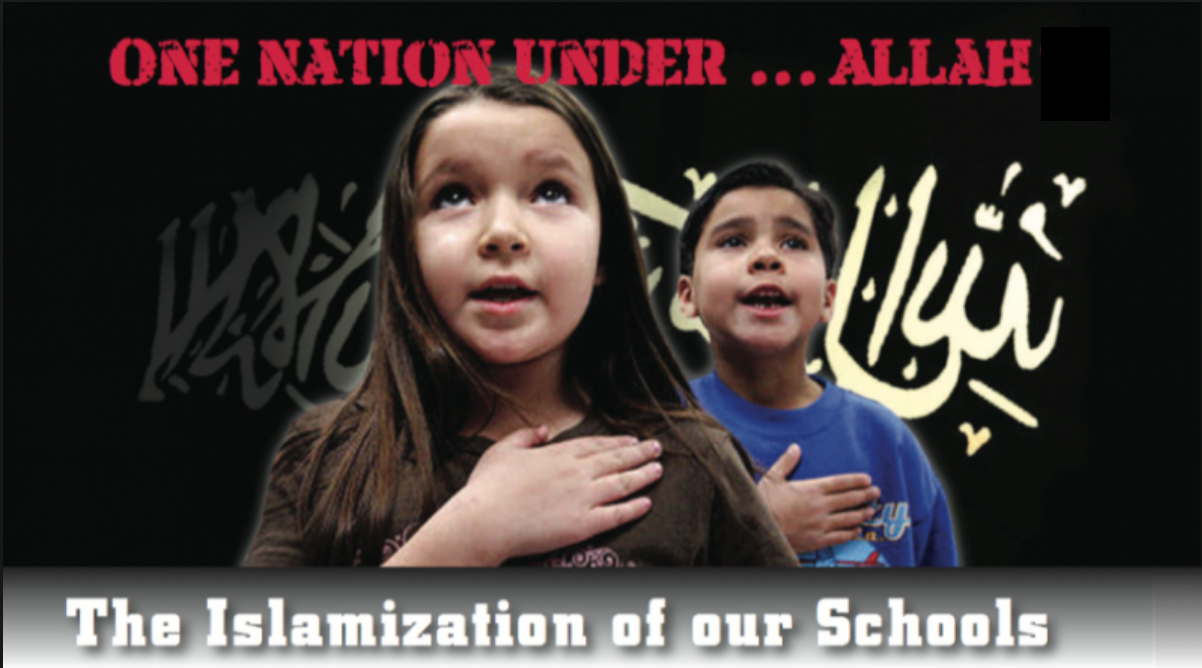 Yesterday, Geller Report reported on a petition filed by hundreds of Newton residents, demanding that its School Committee take measures to address and repair damage caused by its widely publicized flawed curriculum on the Middle East and world religions. Petitioners are concerned about the use of Islam-biased, anti-Semitic and anti-Israel instructional materials, and by the failure of Newton’s public schools to teach students objectively and without proselytizing or propaganda.

This is going on in public schools across America. But the role of Islam in the world — creed apartheid, Islamic supremacism, gender apartheid, Islamic misogyny, cultural annihilation, enslavement and the hundreds of millions of victims of jihadi wars — is scrubbed and whitewashed in the classroom.

I address this issue in depth in my 2011 book Stop the Islamization of America: A Practical Guide to the Resistance. Those of us who warned of this for years were mocked, smeared and defamed as “conspiracy theorists” up until American schoolchildren were coming home reciting the shahada and praising jihad in the cause of Islam.

American schools are proselytizing for Islam in the classroom. This dangerous trend has been increasing over the past ten years, to a point where innocent children are being forced to say the shahada and learning the central tenets of Islam. Other religions are given short shrift, and the little attention they are given is negative and wrong.

Religion has no place in the public school. It is a violation of the establishment clause. And the islamization of the school curriculum is disarming American children in the gravest threat to their future.

Charles Rooney is a teacher at Newton North High School in Newtonville, MA

Thank you for your email. As a result, I plan to devote more classroom time to presenting to students the profound contributions of Islamic culture to the development of modern mathematics.

NEWTON, MASSACHUSETTS – Citing Section 10-2 of the Newton CityCharter, hundreds of the city’s residents have filed a petition demanding that its School Committee take measures to address and repair damage caused by its widely publicized flawed curriculum on the Middle East and world religions. Petitioners are concerned about the use of Islam-biased, anti-Semitic and anti-Israel instructional materials, and by the failure of Newton’s public schools to teach students objectively and without proselytization or propaganda.

According to the City Charter, the School Committee must hold a public hearing and act upon the petition within 90 days. The petition details the long struggle by residents to correct the skewed curriculum, and calls for a number of actions by the School Committee to remedy the present process for selecting textbooks and other learning materials which are inaccurate and tainted, and overseeing the manner in which they are introduced in K-12 classrooms. The petition is available in its entirety by contacting Karen Hurvitz, spokesperson for Education Without Indoctrination, the organization that gathered the signatures for the petition (HurvitzLaw@comcast.net).

In addition to the Newton residents, there were also well over a thousand people outside of Newton who signed the petition. “It just goes to show how much widespread support there is for Newton residents in their protracted conflict over these issues with their unrelenting School Committee,” Ms. Hurvitz observes. “Unfortunately, Newton has become the center of nationwide attention but for all the wrong reasons,” Ms. Hurvitz adds, referring to an ongoing lawsuit on open-meeting law violations against its School Committee, and irregularities with their extension of the contract of controversial School Superintendent David Fleishman. A trial on whether or not the Court should nullify the extension is scheduled for October 11th.