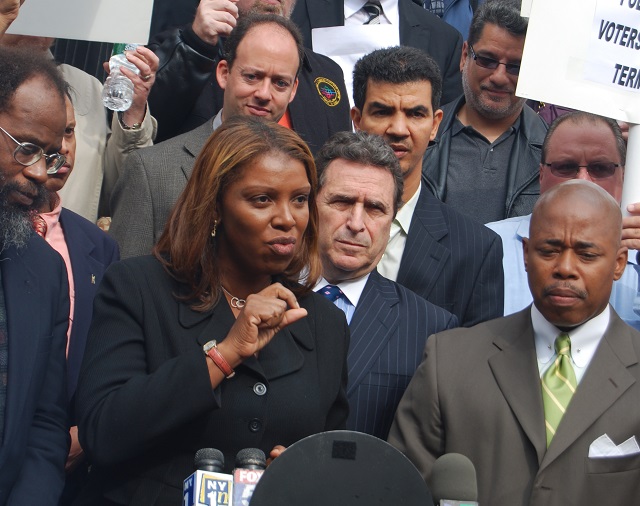 New York’s incoming attorney general on Tuesday promised to persecute/prosecute President Donald Trump, his entire family, and “anyone in his orbit” by hunting for crimes to charge them with.

From Fox News, “Next New York attorney general promises to ‘use every area of the law’ to probe Trump and family”:

New York’s incoming attorney general promised to investigate the business dealings of President Trump and his family as soon as she takes office next year.

“We will use every area of the law to investigate President Trump and his business transactions and that of his family as well,” Letitia James told NBC News in an interview published Tuesday.

“We want to investigate anyone in his orbit who has, in fact, violated the law,” the Democrat added.

Our laws are so numerous, there’s not a businessman in America who couldn’t be charged with something.

Just look at how Robert Mueller managed to manufacture a host of “crimes” out of thin air.

Fortunately, James is too stupid to realize you’re not supposed to announce you’re going to go use the full power of the state to politically persecute someone — you’re just supposed to do it and claim you’re fighting in the name of “law and justice” or some other garbage.

According to NBC News, James, 60, plans to probe Trump’s real estate holdings, the Trump Foundation, any government subsidies Trump may have received and whether he’s violated the emoluments clause of the U.S. Constitution.

The foundation had long been a target of former New York Attorney General Eric Schneiderman, who resigned in May after he was accused of sexual misconduct.

Another one of New York’s finest. Schneiderman, of course, escaped any charges (and for some reason the media decided not to make him a household name)!

Though Underwood and Schneiderman were doing the same as James is planning, they knew better than to openly announce it.

Trump blasted “the sleazy New York Democrats,” including Schneiderman, for “doing everything they can to sue me on a foundation that … gave out to charity more money than it took in” at the time.

A spokesperson for the Trump Foundation, in a statement to Fox News, called the lawsuit “politics at its very worst,” noting Trump contributed himself, or through his companies, more than $8 million.

Additionally, James said she wants to look into the controversial meeting son Donald Trump Jr., and son-in-law Jared Kushner took with other Trump associates and a Russian lawyer during the 2016 campaign. The Trump Tower meeting came about after the lawyer said she had damaging information about Hillary Clinton, Trump’s Democratic opponent.

“Taking on President Trump and looking at all of the violations of law I think is no match to what I have seen in my lifetime,” James told NBC News.

She also praised Special Counsel Robert Mueller’s Russia investigation, saying she believes he is “closing in on this president” and claiming “his days are going to be coming to an end shortly.”

What is this if not an open declaration of war?

Meanwhile, the same media which acted horrified by Trump saying he’d prosecute Hillary Clinton for her crimes is cheering James on.