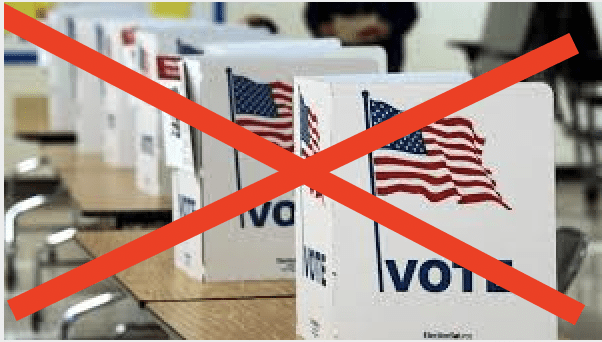 Voters who go to the polls election day won’t have the choice to use a machine. Every ballot is mail-in. It’s like the mafia is running NJ elections.

The Democrat criminal complex using the flu to seize control of free and fair elections.

If you vote in person on Election Day, your vote probably won’t be counted until Nov. 10 in N.J. Here’s why.

This will be an unprecedented election in New Jersey as all active registered voters are receiving mail-in ballots because of the coronaviruspandemic.

And, importantly, your in-person vote won’t likely be counted until at least Nov. 10.

“We have to wait until at least Nov. 10, which is the last day we can accept mail that’s postmarked by Election Day,” said Nicole DiRado, the administrator of the Union County Board of Elections.

Officials will first count the mail-in ballots and mark in the statewide system that they have been received, she said. After that, the provisional ballots will be counted so officials can make sure no one votes twice.

“If we receive both, the vote-by-mail ballot will be counted first,” she said. “Then there is no way we can enter a provisional ballot for counting.”

When voters get to the polls, most won’t have the choice to use a machine.

Only those with disabilities who are unable to complete a paper ballot will be permitted to use voting machines, DiRado said.

The state is expected to release more guidelines on what disabilities will make a voter eligible to use a machine, but DiRado offered a few scenarios.

Blind voters, for example, can use machines that have an audio component and can read a ballot, and then the voter can read the Braille markings on the ballot to make their selections.

Those with Parkinson’s disease would also be permitted to use a machine because it can be hard to completely fill in the bubbles on a paper ballot, she said.