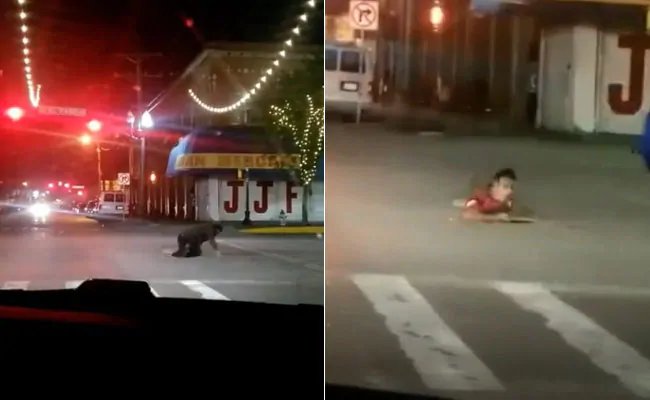 Illegal aliens have allegedly been filmed popping out of manholes at busy intersections in El Paso, over 550 migrants from Africa have been caught in one week and released throughout the country without being screened for Ebola and over half a million illegal aliens are expected to be freed into the US this year — but don’t dare call it an invasion!

An anonymous viewer sent us this video of people coming out of a manhole in the middle of the road in south El Paso Saturday night.
See news happening? Send us your photos/videos here: https://t.co/PYORkJjygD pic.twitter.com/yhdgsdMked

This video was posted last month:

Illegal immigrants popping up through a manhole in a busy intersection in El Paso, Texas pic.twitter.com/aOJBdr9vmf

From the Conservative Review, “550 African migrants were just caught in Texas. DHS head says they aren’t being screened for Ebola”:

The border crisis is no longer exclusively a problem of illegal Central American migrants. As word spreads of the collapse of border enforcement, the number of migrants from Africa continues to increase. The threat of bringing in dangerous diseases is higher than ever, yet there are no mandatory and universal screenings, quarantines, or detention before illegal immigrants are released into our communities, often within hours.

According to preliminary weekly data used internally by Customs and Border Protection (CBP) and given to CR by a Border Patrol agent who must remain anonymous because he is not authorized to speak to the press, over 550 African migrants were apprehended in Texas in just one week — from May 30 through June 5. The lion’s share were from the Democratic Republic of Congo, the country with the worst Ebola outbreak in the world. Here’s the breakdown:

The Democratic Republic of Congo (DRC), not to be confused with the smaller separate nation of “Republic of Congo,” which is to the immediate west of DRC, is currently experiencing the worst Ebola outbreak ever. As of June 4, according to the World Health Organization, there were a total of 2,025 confirmed and reported cases of Ebola, including 1,357 reported deaths.

In addition to Ebola, the DRC is experiencing 87,000 cases of measles, claiming the lives of 1,500. Angola and Cameroon are also experiencing measles outbreaks, according to the Centers for Disease Control (CDC).

Yet local media in San Antonio reported on Friday that hundreds of these African migrants were seen dropped off at bus stations in San Antonio. I confirmed with CBP last week that there is no special screening, extra scrutiny, or quarantine required of those coming from African countries more than from anywhere else.

THIS WEEK: On Tuesday, June 4, a group of 38 illegal aliens made entry under old border wall and were apprehended by Yuma Sector Border Patrol agents. pic.twitter.com/G2tUzfElP1

Video of a large group of 134 Central Americans walking around the end of the border wall in Sasabe on Tuesday. The group immediately surrendered to @CBP #USBP agents. Eight people in the group were hospitalized. For HD video: https://t.co/SMOPKTNt3g pic.twitter.com/BpasR5NHIx

Border Patrol agents have encountered over 180 large groups (100+ individuals) along the Southwest border so far in Fiscal Year 2019, compared to 13 in FY18 and only 2 in FY17. During May alone, USBP apprehended 49 large groups, including a group of 1,045 last week in El Paso: pic.twitter.com/MTsuDim54f

The current situation is unsustainable for @CBP operations. Our officers and agents need additional resources and authorities to confront this crisis and to ensure that our humanitarian obligations to the families and children encountered at the border are fulfilled. pic.twitter.com/lwvBSo4shg

From Breitbart, “More Than Half a Million Illegal Aliens Expected to be Freed into U.S. This Year”:

This projection indicates that far more than half a million foreign minors, adult border crossers, those claiming asylum, and illegal aliens are set to be released into the interior of the country — about 356,000 of which are a direct result of the February spending package approved by Republicans and Democrats and signed by President Trump.

“The bigger [border crossing] numbers … came with the signing of the omnibus spending bill (the Consolidated Appropriations Act of 2019) in mid-February, which essentially prohibited the deportation of any adult from the Northern Triangle countries traveling with a minor and claiming asylum,” Kopits wrote.

Guatemala's Minister of Governance: Mexico has been granting "visas and other kinds of work permits and situations" that "enhance the interests of our Guatemalans in using Mexico on the route to get to the U.S." Most Guatemalans are "economic migrants."https://t.co/mPImrZhBpr

#Editorial: Yay! President Trump's new (acting) DHS Secretary says the Gang of 8 amnesty would have made the country safer! The WH's picks for that cabinet position in particular have been a comedy of errors. Time to #HireKobach, Mr. President, and #CloseTheBorder. #MAGA https://t.co/In2Zj0Iqi8

Our open borders are our greatest strength!