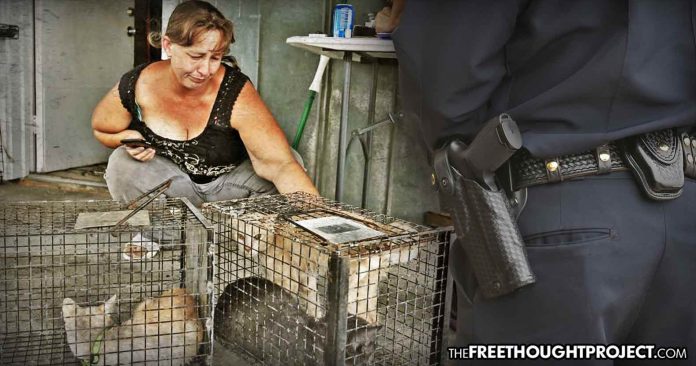 Wayne County, NC — Tammie Hedges, an animal rights activist, attempted to be proactive and protect animals as Hurricane Florence enveloped the NC coast and her home town. She and her group of friends began rescuing animals they found in danger of dying by the rising flood waters. Each animal’s exact location was documented so the owners could be informed following the floods caused by Florence.

All the animals were then transported to a warehouse complete with cages, food, water, pee pads, and litter boxes. Volunteers even slept in the warehouse to make sure rising flood waters didn’t threaten the rescue operation.

Some two dozen animals were rescued before Wayne County Animal Control demanded the animals be turned over to them. The officers who arrived to transport the animals to the state-approved animal shelter reportedly told Hedges she was running an illegal animal shelter without a permit. Hedges disputes such allegations and says she and her group were just trying to defend the animals’ rights to life.

If we didn’t feel like anything was being done wrong, we would not have taken (the animals)…But that is for the courts to decide…All that will come out, if the case goes to court…But at this point, it’s very early in the investigation.

For her part, the animal rights activist claims she’s done nothing wrong.

We were trying to help abandoned animals…We knew North Carolina didn’t have any regulations or laws regarding shelters for animals…So a group of us got together to do something to help those animals. it’s why we opened our building to them so they’d have a safe dry place to go until their owners returned to get them…I had not gone out and gotten any animals, but a couple of independent rescuers had gotten some from flooded areas and brought them to me.

Following the turnover and removal of the animals from the makeshift shelter, friends of Hedges are now calling on North Carolina Governor Roy Cooper to exonerate Hedges of all wrongdoing. In the petition, the group accuses Wayne County Animal Control of being financially motivated claiming the government confiscated the animals because they, presumably, were not getting their surrender and adoption fees if the animals stayed with Hedges. The petition states:

In midst of Hurricane Florence, one woman, Tammie Hedges, decided to help her community by taking action and opening an animal shelter to ensure that the carelessness of pet owners did not result in adding more burden on our already full animal shelters and emergency rescue teams.

The group claims Hedges was just being a “Good Samaritan” and should be protected under the law with the same title.

This woman, Tammie Hedges of Wayne County, North Carolina, should be protected under the good Samaritan Act for her actions. Instead, Wayne County Animal Control Services has decided to condemn and punish an upstanding member of it community because the government did not receive it’s unfair “cut” in midst of a crisis. Please use the influence that you were given by the people, for the people and help Tammie Hedges be rewarded for her due diligence in helping her community.

To date, Hedges has not been charged with any crimes but those closest to the case believe it’s just a matter of time before the so-called authorities trump up charges against her. So far, 216 people have signed the petition to exonerate Hedges. If you’d like to sign the petition feel free to click here for a link to the request.