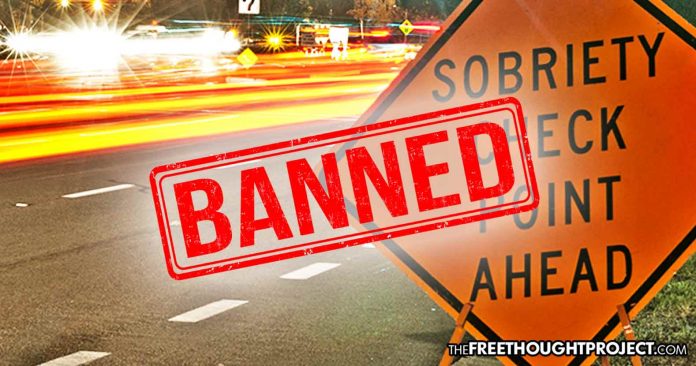 Sobriety checkpoints — also known as DUI checkpoints — are the most common roadblocks you might encounter in the ostensible land of the free. They function as a general purpose investigatory tactic where police can get a close look at passing motorists by detaining everyone they encounter—with no probable cause. Thanks to a bipartisan group of rights flexing state representatives in North Dakota, one state may soon buck the system.

North Dakota House lawmakers have just passed a bill that will prohibit law enforcement from holding these unconstitutional checkpoints to catch drunk drivers.

House Bill 1442 is a breath of fresh air in a government environment in which most legislation serves to restrict or limit our rights. Instead of granting more power to the police state, HB 1442, sponsored by Bismarck Republican Rep. Rick Becker and others, does the opposite. It forces police to actually have “reasonable suspicion” before stopping a driver. Imagine that.

The bill provides that unless a law enforcement officer has a reasonable suspicion that there is a violation of section 39-08-01 (“Persons under the influence of intoxicating liquor or any other drugs or substances not to operate vehicle”), the officer may not halt an operator of a vehicle solely to determine compliance.

This bill is supported by both Republicans and Democrats and has the ACLU of North Dakota’s full support as well, with the organization issuing the following statement:

The ACLU of North Dakota supports House Bill 1442. Our constitutional right under the Fourth Amendment to live free of “unreasonable searches and seizures” is one of our most cherished—and most threatened. While traditional Fourth Amendment violations continue, new areas of concern crop up every day. We need to ensure that the Fourth Amendment, written over 200 years ago to protect our “persons, houses, papers, and effects” from intrusive searches, evolves to protect today’s equivalents.

On February 12, the bill passed the house by a massive margin of 79-14 and on Monday, the Senate referred it to Judiciary Committee before a final vote to make it law.

A roadblock stop is normally quick, but it gives police a chance to check tags and licenses, while also giving officers a quick whiff of the driver’s breath and a chance to peer into the vehicle for a moment. They are invasive, serve to erode the constitution and they don’t work.

Multiple studies from different regions across the country have found that police departments continue to stage thousands of DUI checkpoints, spending millions in taxpayer dollars—and catch almost no one.

If you are like most people and live in one of the many other states whose representatives have yet to propose legislation like this, remember that your constitutional rights still apply in a roadblock situation. Though police are permitted to stop you briefly, they may not search you or your car unless they have probable cause that you’re under the influence or you agree to the search. As such, you are not required to answer their questions or admit to breaking the law.

Just because courts have upheld the tyrannical practice of stopping anyone and everyone, regardless of guilt, does not mean that it is just—and HB 1442 proves those inside government are beginning to see the light.

Because of the unjust nature of DUI and Driver’s license checkpoints, individuals from coast to coast have formed an entire realm of activism known as DUI or Checkpoint refusal. For years, the Free Thought Project has been covering this form of activism and promoting the brave men and women who dare stand up to the police state.

The Free Thought Project has countless articles on the site detailing this phenomenon.

To those who would say, “if you are not doing anything wrong, you should have nothing to hide,” and support these checkpoints, you are the problem. Families do not draw the curtains in their homes at night because they are doing something wrong. One does not lock the bathroom door in public because they are doing something wrong. It is about maintaining, asserting, and protecting your rights — without being forced to lose your privacy.