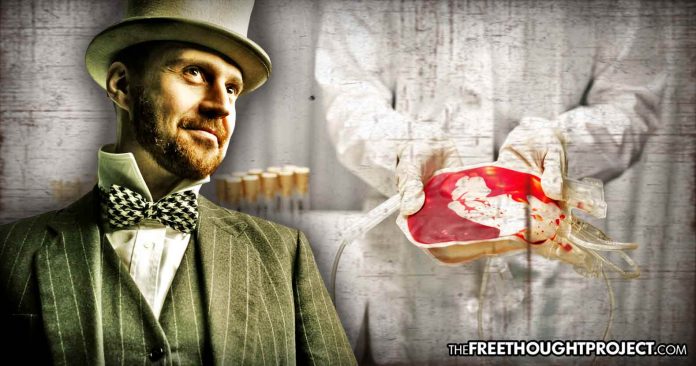 A new startup is hoping to cash in on a disturbing trend that has been growing in popularity among the ultra-rich. It is a treatment in which blood from young people is injected into the veins of older people—seriously.

While it has been reported that this practice has been popular underground in Silicon Valley for years now, this is the first company to officially offer the service to the public. Stanford Medical graduate Jesse Karmazin is the founder of Ambrosia Medical, which plans to open its first clinic in New York City in the next few months.

Ambrosia was involved in the first clinical trials in the US that tested the effects of this treatment.

The study has not yet been made public, but Karmazin told Business Insider the results were “really positive.”

Since blood transfusions are already approved by the FDA, Ambrosia has had very few regulatory hurdles in opening their business. As Business Insider reports:

The trial, which involved giving patients 1.5 liters of plasma from a donor between the ages of 16 and 25 over two days, was conducted with physician David Wright, who owns a private intravenous-therapy center in Monterey, California. Before and after the infusions, participants’ blood was tested for a handful of biomarkers, or measurable biological substances and processes that are thought to provide a snapshot of health and disease.

In the week since the company launched their website, they have already received over 100 calls from people requesting appointments.

“So many people were reaching out to us that we wanted to make a simple way for them to be added to the list,” David Cavalier, Ambrosia’s chief operating officer said.

During the trials, patients paid $8,000 to be involved and receive the treatment, but the company has clarified that the price the public sees may be much different, even higher, than what the trial participants paid.

“The trial was an investigational study. We saw some interesting things and we do plan to publish that data. And we want to begin to open clinics where the treatment will be made available,” Cavalier said.

I know it sounds too outrageous to be true, but these outlandish practices have been commonplace among aristocrats in various different cultures throughout history. Before going further, it is important to point out that two consenting adults involved in a voluntary agreement such as this is entirely acceptable. However, some of these “donors” are only 16 years old. The age to donate blood legally in New York is 17. Donating under 17 requires written consent from the parent.

What’s more, there are implications that tie this to a very dark side of human history. In most modern cultures, mass murder and human sacrifice still takes place out in the open under the cover of warfare, while many argue that cannibalism also still takes place but behind closed doors.

It is only in the past few hundred years that the practice of cannibalism among royals has not been publicized. In Europe, around the time of the American Revolution “corpse medicine” was very popular among the ruling class, Charles II even brewed his own.

Dr Richard Sugg of Durham University has conducted extensive research into the practice of corpse medicine among the royalty.

“The human body has been widely used as a therapeutic agent with the most popular treatments involving flesh, bone or blood. Cannibalism was found not only in the New World, as often believed, but also in Europe,” Sugg said.

“One thing we are rarely taught at school yet is evidenced in literary and historic texts of the time is this: James I refused corpse medicine; Charles II made his own corpse medicine; and Charles I was made into corpse medicine. Along with Charles II, eminent users or prescribers included Francis I, Elizabeth I’s surgeon John Banister, Elizabeth Grey, Countess of Kent, Robert Boyle, Thomas Willis, William III, and Queen Mary,” he added.

“There are widespread rumors in Silicon Valley, where life-extension science is a popular obsession, that various wealthy individuals from the tech world have already begun practicing parabiosis, spending tens of thousands of dollars for the procedures and young-person-blood, and repeating the exercise several times a year,” Bercovici reported.

In his article, Bercovici also expressed concerns about a developing black market for young people’s blood.