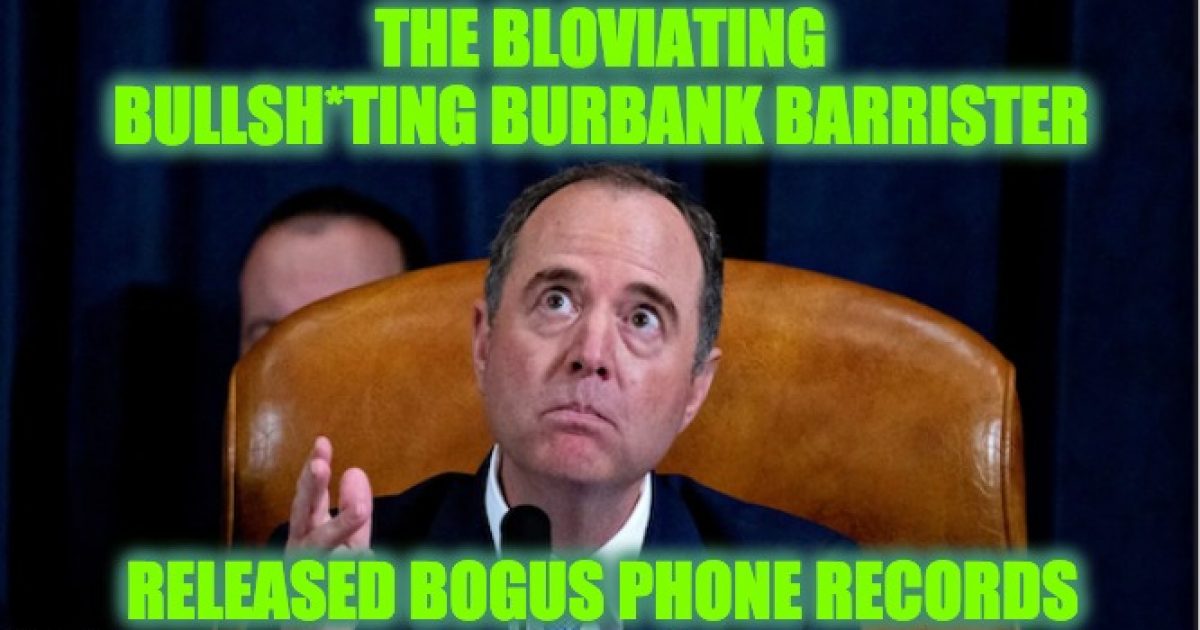 The Bloviating Bullsh*ting Burbank Barrister Rep. Adam Schiff (D-CA) regularly lies and doctors evidence, and this time he lied about a house colleague Rep Devin Nunes. There’s something funky about the phone records of Nunes that Schiff released. Also questionable is how Schiff got his grubby hands on the phone records as his committee spokesman said there was no subpoena. Devin Nunes phone records.

During an appearance on Saturday’s edition of “Fox and Friends,” Rep. Devin Nunes, R-Calif., revealed that the phone records previously released to the public by impeachment coup leader Adam Schiff do not match his own records (video below)

“I can tell you there’s no way that I talked about me being in Vienna meeting with random Ukrainians,” he added. “That didn’t happen.”

By releasing the phone records of GOP members, @realDonaldTrump lawyers and journalists he doesn’t like, @AdamSchiff is doing exactly what he’s accusing the President of – using his power against his opponents for political purposes.

According to the spokesman for Schiff’s Committee, he did not subpoena the phone records:

Patrick Boland, the top spokesman for Democrats on the House Intelligence Committee, told The Daily Beast on Thursday that investigators “did not subpoena call records for any member of Congress or their staff… or for any journalist,” including—Boland added—the committee’s ranking member, Rep. Devin Nunes (R-CA) or John Solomon, a columnist formerly of The Hill whose reporting formed much of the public case for Rudy Giuliani and others to do their muckraking in Ukraine.

“Any questions about the fact that Members, congressional staff, or journalists appear in call records released by the Committee should be directed at those individuals, who were in contact with individuals of investigative interest to the impeachment inquiry,” Boland added.

If Schiff didn’t subpoena the records, how did he get them? Why did he release them? It is frightening on many levels, including Freedom of the Press.

This entire impeachment movement is a sham, led by Schiff, a liar who doctors evidence. Not only in the case of the phone records, but throughout the Mueller investigation (remember he said he had evidence of Trump campaign colluding with Russia), and even with this bogus Ukraine investigation (he read his own version of the Trump/Zelensky phone call transcript. John Turley was correct when said this entire process is moving forward based on conjecture, assuming what the evidence would show if there existed the time or inclination to establish it.

Even if the files were correct, just the fact that Schiff released the phone records is wrong. In fact, Devin Nunes told Maria Bartiromo on Sunday that he is preparing a lawsuit about the release of his phone records.

So we’re putting together a legal team. I think the republican members of congress they have to be concerned because if they ever spoke to any of these people their records could be released. And i think journalists should be concerned because if journalists ever spoke to Rudy Giuliani at any time. That the Democrats decide that they don’t like what a journalist has done or what another member of congress has done they can just release these.

(…)The media is treating this as a victory when it is a disgraceful breach of ethical and legal propriety. Yeah so state law so I’m a Californian. So, for sure state law you cannot release somebody’s phone records. So for sure that that right has been violated. But we also have to look at the constitutional aspects of this and do all the members of Congress have a right to privacy. And can just one member because he doesn’t like them, and he’s a political opponent of someone. Can that member just subpoena records and then release just to embarrass or to create a distraction or to build whatever fantasy land narrative that they continue to build?

Because remember these guys jump from one phony narrative to another okay.

Below is a video of Nunes announcing his legal action.