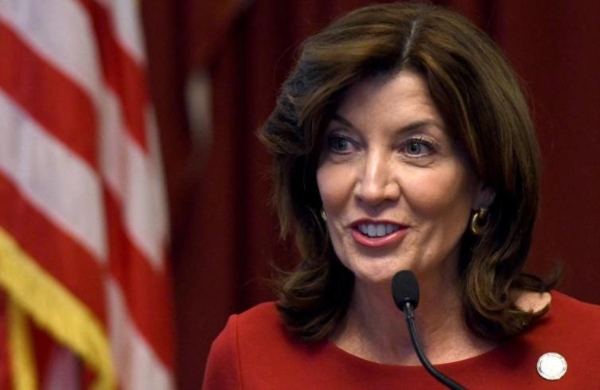 (Natural News) More and more patriots are beginning to wise up to the fact that the Democrat Party, a.k.a. the American Marxist Party, is full-on implementing a scheme to replace as many white, Christian, conservative voters with third-world poor people of color who will eagerly support them after they have been allowed to migrant to the U.S. by any means possible, legal and illegal.

The latest Democratic official to reinforce that claim (because it’s no longer a ‘theory’) is new New York Gov. Kathy Hochel.

In a message to healthcare workers in the Empire State, the governor-dictator threatened to replace any of them who refused to get the COVID-19 vaccine with foreigners (remember when, just a year ago, Democrats were praising our frontline healthcare workers dealing with the pandemic head-on, without a vaccine?).

“To those who won’t, we’ll be replacing people. And I have a plan that’s going to be announced very shortly,” she said.

“We’ve identified a whole range of opportunities we have to help supplement them.”

She went on to say that state officials were “working closely with various hospital systems to find out where we can get other individuals to come in and supplement places like nursing homes.”

“We’re also reaching out to the Department of State to find out about visas for foreign workers, on a limited basis, to bring more nurses over here,” she said.

It’s not clear where these foreign healthcare workers will come from — other Western ‘democracies’ like Australia are also replete with left-wing tyrants who have exploited the pandemic to enhance their own power and rule, not govern, over their people.

But anyone who doubts that the American Marxist Party isn’t serious about replacing patriots with foreigners isn’t paying enough attention.

None other than Fox News host Tucker Carlson was among the first pundits to expose this plan, linking it to the Biden regime’s open borders policies that have seen more than 1.3 million migrants enter illegally into the U.S. since the old man took over in January and started reversing Donald Trump’s border enforcement executive orders.

“Now, I know that the left and all the little gatekeepers on Twitter become literally hysterical if you use the term ‘replacement,’ if you suggest that the Democratic Party is trying to replace the current electorate, the voters now casting ballots, with new people, more obedient voters from the Third World,” Carlson first said in April. “But they become hysterical because that’s what’s happening, actually.”

In August, former House Speaker Newt Gingrich (R-Ga.) made a similar observation during an interview with Fox News host Maria Bartiromo, in which he said Democrats are attempting to “drown traditional, classic Americans” by flooding the United States with illegal immigrants.

“They want to be in America, and I think what is hard for most of us to accept is that the anti-American left would love to drown traditional, classic Americans with as many people as they can who know nothing of American history, nothing of American tradition, nothing of the rule of law. When you go and you look at the radical left, this is their ideal model to get rid of the rest of us because we believe in George Washington, we believe in the Constitution, and you see this behavior over and over again,” Gingrich explained.

“The Biden administration is tolerating a city a month… we’re getting a new city every month. I was trying to think of a city of 210,000 as an example, but so imagine, you have a government which tolerates 210,000 people who are illegal coming into the U.S. They may have COVID, they may belong to a criminal gang, we have no idea who they are,” he said.