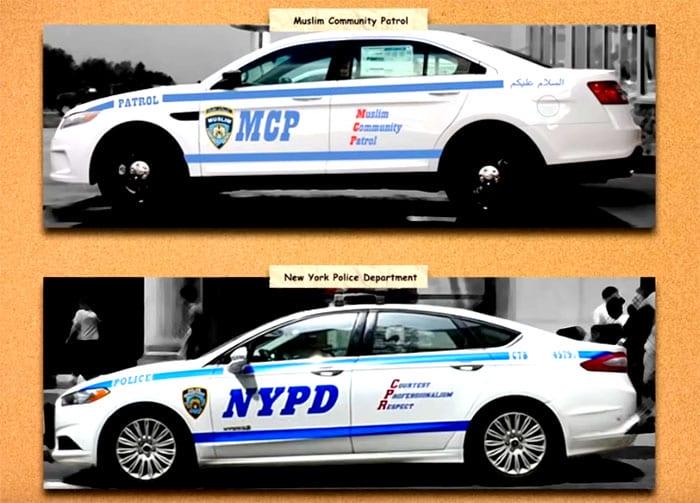 Remember the recent story where MCP started a turf war with a dangerous street gang?

NYPD had to break up that mess, where at least one gang member flashed a gun.

It seems that MCP is again looking for back up heading into the new year, but not from the NYPD.

According to this video report, there are currently three Muslim Patrol cars, but there are plans to increase the fleet to 30. An undercover informant who applied to become a patrol member was told by the Director of Operations of the MCP, Mahwish Fathma, above, that the MCP existed in part to implement Islamic law.

We’ll enforce it [Sharia] on Muslims first then on non-Muslims. We’re going to enforce both Sharia law and American law. It would be contradictory to enforce Sharia law without also upholding the laws of the land.

I should point out that the video was posted by a right-wing “family values” organisation – the Christian Action Network which was branded as a hate group by the Southern Poverty Law Center – but more reputable news outlets, including The New York Times, have voiced similar concerns.

The Muslim Patrol originally said its purpose was to serve as a liaison between Muslims and the NYPD. But after the mosque shootings in New Zealand in March, in which a gunman killed 51 Muslims, the MCP began describing itself as a law enforcement organisation, claiming its goal is to:

When the group was launched, the group’s Vice President Noor Rabah dismissed the notion that it was intent on imposing sharia law:

It’s about Muslims taking care of people in our community. But it’s not just Muslims. If we’re driving or we’re patrolling, and we see a guy attacking a woman we don’t ask, ‘what’s your religion? What do you believe in? Who’s your God?’ We’re there for preventative measures … we’re there to help our community.

But according to this report “bullying” and “gangster-like” tactics have been reported by locals in areas where the patrols operate, creating a backlash against the self-described “civilian patrol organisation.”

Earlier this month it became embroiled in potentially explosive incident outside the Masjid Taqwa in Brooklyn with members of the Bloods, a notoriously violent gang.

A verbal altercation began when a teenage boy allegedly “disrespected” a Muslim woman outside the Masjid Taqwa mosque on Fulton Street. The boy did not touch the woman, bystanders say, but did speak to her.

A MCP member grabbed the teen by the collar and threw him against the gate of the mosque. While the boy was pressed against the fence, the Muslim Patrol member held him by the neck and lectured him.

The boy complained to his father, who happens to be a senior member of the local Bloods. The father rallied six other Blood members to join him and went to the mosque, where at least one Blood member brandished a weapon.

I wrote about the growing MCP feud with the violent Bloods street gang a few days ago.

What kind of city allows an ethnic or religious group organize their own police?

NYC certainly does things differently than we do in the rest of the country.

I live in the Southwest Corner of Missouri.

This is not the Deep South, but it’s pretty close to the same cultural makeup.

Imagine if we had our own KKK Kops rolling through town, or The White Supremacist Police?

In NYC they allow those who willfully headbutt the floor for Allah, to play cops in a city of millions.

This was a disaster waiting to happen.

Members of New York’s Muslim Patrol recently became embroiled in a near-explosive altercation outside the Masjid Taqwa in Brooklyn with members of the Bloods, a notoriously violent gang.

The Muslim Patrol gained international attention in the fall of 2018 after several of its patrol cars — which look like New York Police Department (NYPD) cars –were spotted in Brooklyn and Staten Island.

The Bloods are a violent African-American street gang known for trafficking drugs and guns. This criminal organization has made national headlines with targeted assassinations, drive-by shootings and deadly gun battles with law enforcement.

On December 10, a verbal altercation began in the evening when a teenage boy allegedly “disrespected” a Muslim woman outside the Brooklyn mosque on Fulton Street. The boy did not touch the woman, bystanders say, but did speak to her.

“That MCP [Muslim Community Patrol] officer snatched that boy up,” one witness said. “He grabbed him by the collar and threw him up against the gate and held onto him by the neck area.”

After the rebuke, the boy complained to his father, who happens to be a senior member of the local Bloods. The father rallied six other Blood members to join him and went to Masjid Taqwa, where at least one Blood member brandished a weapon.

“One of them was strapped,” a witness said of a Blood member who had a firearm. “He raised his jacket and flashed that gun. Those dudes came out there to shoot up that Masjid. The father, he wanted to mess that MCP officer up.”

According to the witness, the father said to the Muslim Patrol officer, “Dude, I’m going to bust in your f—— mouth if you ever put your hands on my child again.”

Witnesses reported mutual shouting as the Bloods confronted the original Muslim Patrol member, who was quickly shoved into the mosque by his comrades to protect him.

“It was going to be something big out there,” one witness said. “The Bloods were shouting, ‘You all are running around here playing like you’re the real police. You all want to put your hands on these little kids. We don’t give a f— about your Masjid. F— your Masjid.”

As tensions rose, a New York Police Department (NYPD) patrol unit arrived and used its loudspeaker to tell the two arguing factions to “disperse” and to “keep it moving.”

One witness familiar with the Bloods said, “These Blood dudes are from 8th Avenue in Brooklyn, and they are one of the harder core Bloods over there. So those MCP officers are going to get some beef.”

As the Bloods dispersed, one Blood member turned and told the Muslim Patrol members, “This is not over. It’s just begun.”

What kind of city allows its people to go around playing the part of cops, when they are NOT?

The answer is the same type of city that sends people like AOC to congress.

This stuff would not fly in most of the country.

But MOST New Yorkers seem to be a special kind of stupid, don’t they?