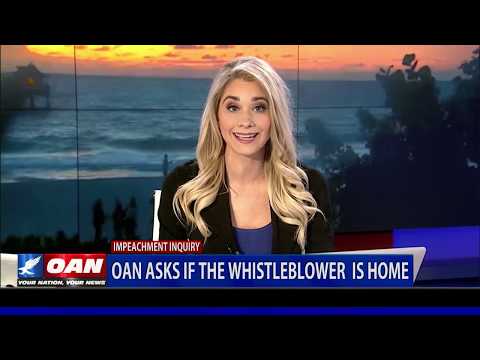 One America News Network’s Neil McCabe recently followed a number of tips that Eric Ciaramella may be hiding out at his parent’s home in Connecticut.

So what did Neil do?

He went to the Ciaramella home of course.

Pretty gutsy journalists they have at OAN.

Ciamarella was probably playing Roblox in his parents’ basement.

He’s got to be stressed, and nothing relieves stress like Roblox while eating Mom’s special grilled cheese sandwiches.

One America News reporter Neil W. McCabe followed up on information from multiple sources that the alleged whistleblower, Eric Ciaramella, was hiding out at his parents’ home in Connecticut.

After McCabe knocked on the front door and rang the doorbell, a man who gave the same name as Ciaramella’s father drove up and spoke to McCabe in the driveway. He acknowledged that he knew Eric and asked McCabe for his business card.

McCabe also called two numbers associated with the family at that address and left a message with each. At the end of this news package, McCabe tells the so-called whistleblower he is welcome to respond to OAN.

Ciaramella is a CIA analyst, who was assigned to the National Security Council staff’s Ukraine desk at the White House. In addition to being a vocal advocate for more aid to Ukraine, the analyst was reported to have also advised then-Vice President Joe Biden, when Biden held sway over America-Ukraine relations.

Ciamarella could be anywhere, but kudos to OAN for following a lead.

I’d check Schiff’s house next, or maybe even Biden’s.

What a farce this whole impeachment thing is.

I’m not sure how many News Networks would have knocked on Ciaramella’s parents’ door.

I’m not positive what they expected to accomplish, but it was entertaining. 🙂

Next time they should station someone next to the walkout basement, in case Ciaramella goes on the run.

I’m entertained and laughing but…

You had to follow the lead and you did.

Where were FOX and CNN?