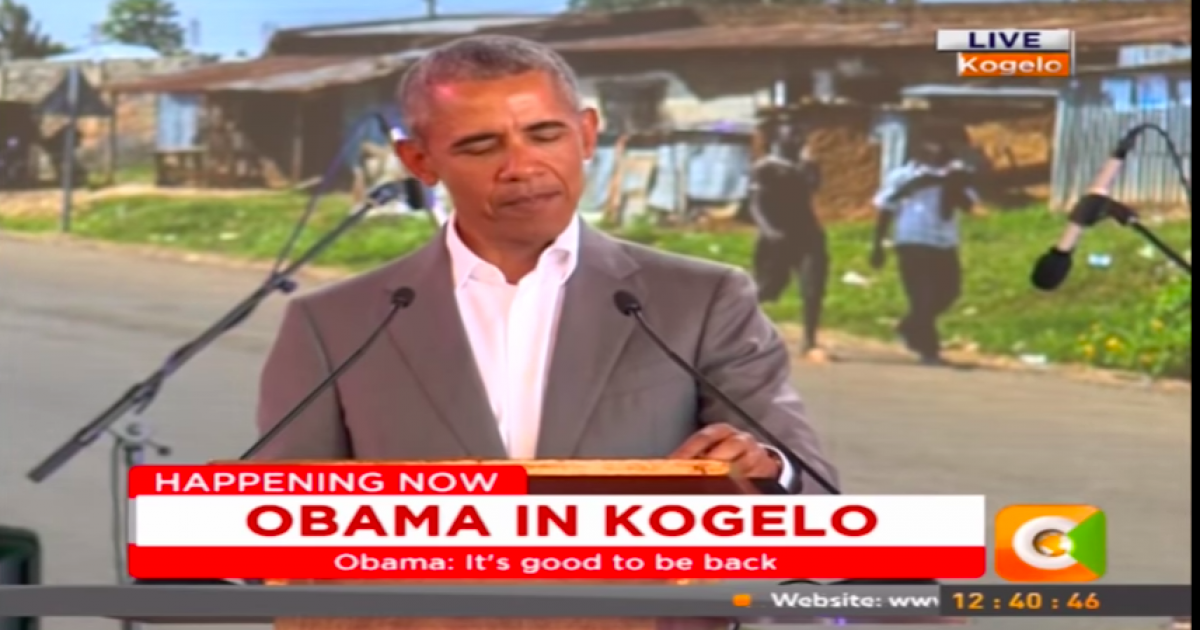 Don’t blame just the Democrats, America. Every single Republican representative who didn’t deal with this usurper demonstrated that they don’t have the spine to abide by the Constitution and deal with people like Barack Hussein Obama Soetoro Soebarkah.

On Saturday, at a foreign speech at the opening of the Sauti Kuu Resource Centre a, “multi-million-shilling youth center built by his half-sister Auma Obama” in Kogelo, Kenya Obama declared, “Now, three years ago, I visited Kenya as the first sitting American President to come from Kenya.”

“When I was president it was a little bit harder to get up here cause my plane didn’t fit the tarmac up here,” he continued. “While three years ago my sister Auma introduced me before I gave a speech, today I’m really coming as a brother, as a citizen of the world, as someone with a connection to Africa to talk about the importance of what she’s doing but also to create a larger context for what’s possible.”

The claim took place at the 5:49 mark of the video above.

For all those who will chastise me and claim, “Well, he meant that his father came from Kenya,” I say, then he should have said that, but he didn’t. We know what his grandmother has said. She claims to have been at his birth in Kenya.

We know what the Kenyan Parliament minutes contain, don’t we?

Go back and read the Kenyan Parliament’s own minutes on November 5, 2008, where they openly stated,

“Mr. Obama, is a son of the soil of this country (Kenya). Every other country in this continent is celebrating the Obama win. It is only proper and fitting that the country which he originates should show the same excitement, pomp and colour.”

This statement was followed by the Deputy Speaker warning the member who just made the statement,

“You had better be very careful where you transgress between watching your own sovereignty and what can be interpreted in some quarters as some form of treason.”

The same month and year, Obama said he was the “first Kenyan-American president.”

Then there is his fraudulent birth certificate. However, it’s not just the fake birth certificate, which Obama’s own attorney admitted was fraudulent, but even Barack and Michelle Obama, along with the Kenyan Ambassador Peter Ogego, have all said that Obama was either born in Kenya or referred to Kenya as “his homeland.” Sheriff Joe Arpaio brought additional evidence and claimed this is a national security issue. Lord Monckton called Obama an illegal president after demonstrating the fraudulent nature of the birth certificate and even Israeli Science claims that Obama’s birth certificate is a fake. Apparently so is Obama’s selective service card and his social security number.

Meanwhile, if Congress would have cared rather than turned the other way, a lot could have been stopped. I consider representatives like Markwayne Mullins to be complicit in the high crimes, misdemeanors and treason of Barack Hussein Obama Soetoro Soebarkah because he simply didn’t “give a sh*t.”

And who is laughing now, America? Obama and all his minions are because they have taken America on a path to destruction and it seems he will never be brought to account, not even by this administration.