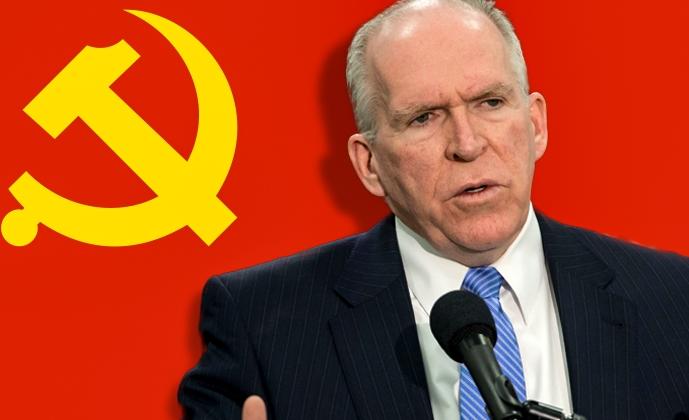 CIA Director Brennan suppressed facts or analysis that showed why it was not in Russia’s interests to support Trump and why Putin stood to benefit from Hillary Clinton’s election. They also told Fred Fleitz that Brennan suppressed that intelligence over the objections of CIA analysts.

From the very first, John Brennan was Obama’s muscle who worked outside the law, to put it kindly. Brennan handled the nasty things that needed to be done. If you recall, during the presidential election, I ran a number of stories on the passport breach of Obama’s passport at the Department of State. There were always questions about Obama’s citizenship status and what kind of passport he used to he travel to Pakistan during his college years as a foreign student.

Back in March 2008, the State Department launched an investigation of improper computer access to passport records of Barack Hussein Obama. The investigation was focused on John Brennan company (here.). Brennan’s employee was accused of tampering with the passport files.

You will also recall that the key witness in the presidential Passport tampering case was murdered. Shot in the head, in his car, in front of his church.

Fred Fleitz: Here’s what’s behind the Senate-House disputes on Russian meddling in 2016 election

While the nation is focused on the coronavirus pandemic, the Senate Intelligence Committee issued a bipartisan report Tuesday that challenges House conclusions about former CIA Director John Brennan cooking intelligence for political purposes.

At issue is a controversial January 2017 intelligence community assessment that concluded that Russia had meddled in the 2016 presidential election to help Donald Trump win. That assessment supported the basic premise of the widely discredited Steele Dossier that, according to recently declassified FBI documents, contained Russian disinformation.

The report released Tuesday was the second Senate Intelligence Committee report contradicting the findings of the House and other intelligence experts. The first Senate report was issued in July 2018.

According to the latest Senate Intelligence Committee report, proper procedures were dutifully followed in drafting the intelligence community assessment.

However, the House Intelligence Committee came to a different conclusion in its March 2018 report, finding that the intelligence community assessment’s judgments on why Russian President Vladimir Putin meddled in the 2016 U.S. presidential election did not employ proper analytic tradecraft.

So who is right?

Accusing the intelligence community of improper “analytic tradecraft” in analyzing Russia’s strategic intentions is an extremely grave indictment for a congressional oversight committee to make. In my opinion, there is no question the House Intelligence Committee is right for the reasons in its 2018 report and other subsequent findings.

In addition, House Intelligence Committee staff revealed the actual drafting of the intelligence community assessment was done by three close associates of former CIA Director Brennan, who has proven to be the most politicized intelligence chief in American history.

Contrary to common practice for controversial intelligence community assessments, Brennan’s team allowed no dissenting views or even an annex with reviews by outside experts.

These were extraordinary violations of intelligence community rules to ensure that analysis is accurate and trusted. The Senate committee reports ignored these foundational violations.

The Senate Intelligence Committee report falsely claims that “all analytical lines are supported with all-source intelligence” and that analysts who wrote the intelligence community assessment consistently said they “were under no politically motivated pressure to reach specific conclusions.”

House Intelligence Committee staff members found the opposite. They told me there was conflicting intelligence evidence on Russian motivations for meddling in the 2016 election.

More gravely, they said that CIA Director Brennan suppressed facts or analysis that showed why it was not in Russia’s interests to support Trump and why Putin stood to benefit from Hillary Clinton’s election. They also told me that Brennan suppressed that intelligence over the objections of CIA analysts.

Instead, the Brennan team included low-quality intelligence that failed to meet intelligence community standards to support the political claim that Russian officials wanted Trump to win, House Intelligence Committee staff revealed. They said that CIA analysts also objected to including that flawed, substandard information in the assessment.

So why did the Senate and House Intelligence Committees come to such starkly different conclusions? Why would professional intelligence officers give different accounts to these committees?

Democrats and their left-wing media allies claim the House Intelligence Committee’s findings are not credible because they were solely the work of what was then the Republican majority under then-Chairman Devin Nunes, R-Calif.

On the other hand, the Democrats and their media allies contend that the Senate Intelligence Committee’s findings must be believed because they are bipartisan and endorsed by the committee’s Republican Chairman Sen. Richard Burr of North Carolina.

I strongly disagree for several reasons.

The unprecedented partisanship of the present chairman, Rep. Adam Schiff, D-Calif., and his staff’s apparently authorized leaks, made a bipartisan report impossible. It is unfair to reject the House Intelligence Committee report out of hand just because it was written by Republican members.

Second, it is more reasonable to regard any bipartisan report on this subject as suspicious. Democratic lawmakers have been fanatically united in promoting the false Trump-Russia collusion narrative. So it is impossible to believe that a Democratic Senate Intelligence Committee member would allow any references in the panel’s reports that intelligence was slanted and weaponized to undermine Trump’s presidency.

If information ever reached the Senate Intelligence Committee about Brennan suppressing intelligence in the intelligence community assessment that Putin favored Clinton instead of Trump, its Democratic members and staff certainly would have demanded that those crucial facts never be known.

Third, it is well known that Sen. Burr has been an extraordinarily weak Senate Intelligence Committee chairman. Some on Capitol Hill quip that the CIA oversees Burr, not the other way around.

The intelligence officers probably felt free to level with Republican staff members about how the intelligence community assessment was weaponized. But they would not level with the bipartisan Senate investigation because they worried that their honest assessments that countered the narrative would get back to their supervisors and damage their careers.

I witnessed this problem several times during more than two decades in government.

So what happens next? Acting Director of National Intelligence Rick Grenell is trying to get to the bottom of problems with the 2017 Russia intelligence community assessment. He has asked to see all of the intelligence on which it is based.

More importantly, federal prosecutor John Durham reportedly is looking into the drafting of the intelligence community assessment as part of his investigation of possible government wrongdoing before and after the last presidential election.

One anticipates that a tough lawman like Durham, with confidence from both sides of the political aisle, will finally answer whether the 2017 intelligence community assessment was rigged to hurt Trump politically.