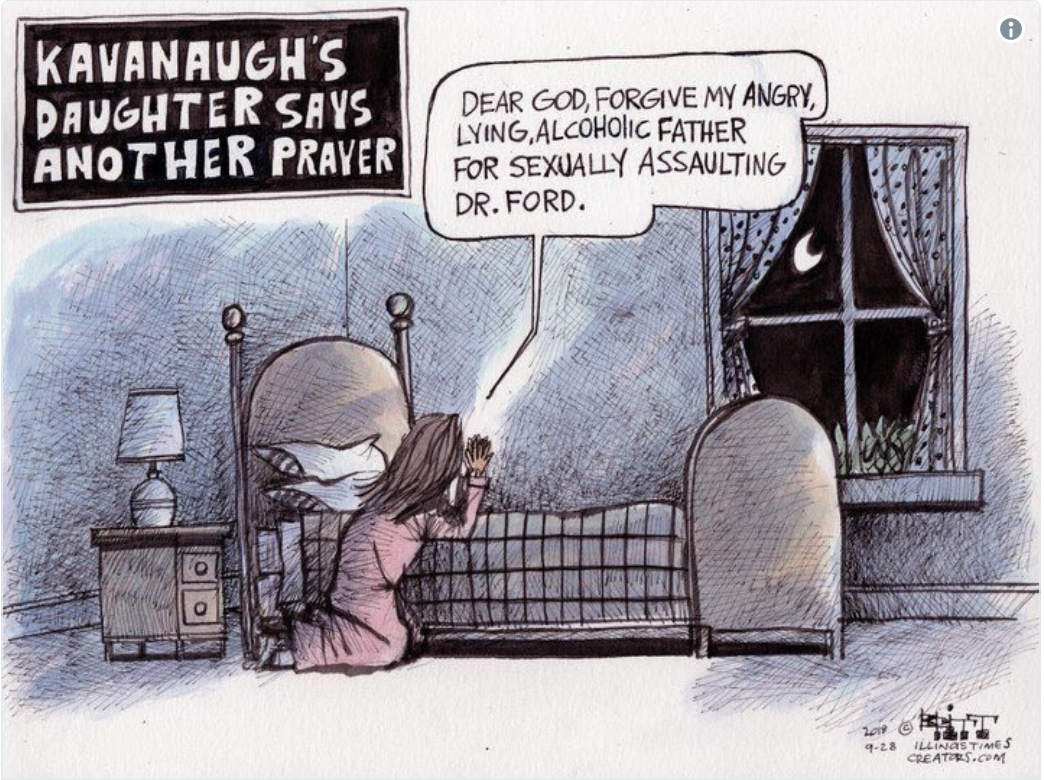 Mocking a child and her prayers, no less.

IN THE LATEST EXAMPLE THAT THE FAR-LEFT HAS NO SCRUPLES, A DISGUSTING CARTOON FROM ILLINOIS TIMES’ CARTOONIST CHRIS BRITT TOOK AIM AT SUPREME COURT NOMINEE BRETT KAVANAUGH.

Children should always be off limits when it comes to politics. I don’t care if it’s Barack Obama’s children or Donald Trump’s children. Kids have no place on the political battleground.

To Whom it May Concern at .@ILTimes:

I would like to formally lodge a protest at the disgraceful sketch by your cartoonist, Chris Britt, depicting the 10 year-old daughter of Judge Brett Kavanaugh.

It contravenes every standard of decency in our society. Please remove it. pic.twitter.com/WWpI2f9NVA

Before this goes further, it’s worth pointing out that the newspaper named in the tweet, the Illinois Times, published a Facebook post stating Britt is not an actual employee of the newspaper, though he is a contributor. It also stated that the cartoon “did not appear in our publication or on our website. The Illinois Times name should not have appeared on the cartoon and we’ve asked Chris Britt to remove it.”

So the cartoonist is already feeling an impact.

I’ve defended plenty of political cartoons before, regardless of whether they’re skewering Democrats or Republicans. But those cartoons typically try to get across some sort of political message in a biting illustration.

Britt’s cartoon literally serves no purpose other than to attack Kavanaugh through his daughter.

That is disgusting and reprehensible. The cartoon cannot be condemned harshly enough.

This is an attack on Kavanaugh’s 10-year-old daughter, full stop. It serves no other purpose other than to demean a 10-year-old girl and her father.

As Twitter user @vbspurs points out, this isn’t the first time liberals have stooped so low to attack a Republican’s child.

To Whom it May Concern at .@ILTimes:

I would like to formally lodge a protest at the disgraceful sketch by your cartoonist, Chris Britt, depicting the 10 year-old daughter of Judge Brett Kavanaugh.

It contravenes every standard of decency in our society. Please remove it. pic.twitter.com/WWpI2f9NVA

Let’s not be tempted to think that the Kavanaugh Derangement Syndrome currently engulfing the left is a new phenomenon. Who can forget this cartoon of Sen Ted Cruz depicting his two daughter as monkeys. MONKEYS. pic.twitter.com/omRFkSRApe