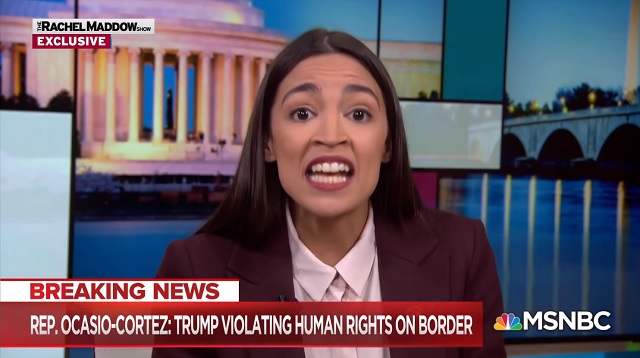 Alexandria Ocasio-Cortez said Tuesday night on MSNBC that it’s “wrong and anti-American” for President Trump to restrict forms of legal immigration and he’s “forcing” illegal immigrants “to become undocumented” by not handing out legal status to everyone who wants to come here.

WATCH: Alexandria Ocasio-Cortez delivers impassioned response to President Trump’s address: “The president should be really defending why we are funding [ICE] at all … right now, what we are seeing, is death.” pic.twitter.com/4Al4GLWUvB

“No one should feel unsafe in the United States of America and that includes our amazing and beautiful and productive immigrant community. And moreover, the one thing that the president has not talked about is the fact that he has systematically engaged in the violation of human rights borders – of human rights on our borders,” Ocasio-Cortez told Maddow.

That does not include people like Kate Steinle, Mollie Tibbetts and others who were killed by illegal aliens. They’re on their own!

[…] “He has separated children from their families, he talked about what happened the day after Christmas. On the day of Christmas, a child died in ICE custody,” Ocasio-Cortez explained.

[…] “The president should not be asking for more to an agency [U.S. Immigration and Customs Enforcement] that has systematically violated human rights. The president should really be defending why we’re funding such an agency at all because right now what we’re seeing is death. Right now what we’re seeing is the violation of human rights,” she said.

Overstaying your visa is a form of illegal immigration. Does this mean she’s fine with a much-needed crack down on visa overstays?

Ocasio-Cortez added: “This is systematic. It is wrong and it is anti-American. And again, those women and children trying to come here with nothing but the shirts on their back to create an opportunity and provide for this nation are acting more in an American tradition than this president is right now.”

This is nearly the exact same line spewed by neocons like Bill Kristol, Max Boot and Jennifer Rubin (all of whom are basically now Democrats).

Even though she believes this country was founded on “the genocide of native peoples,” she simultaneously believes America has always been about open borders and liberal egalitarianism.

This woman is so stupid it boggles the mind.