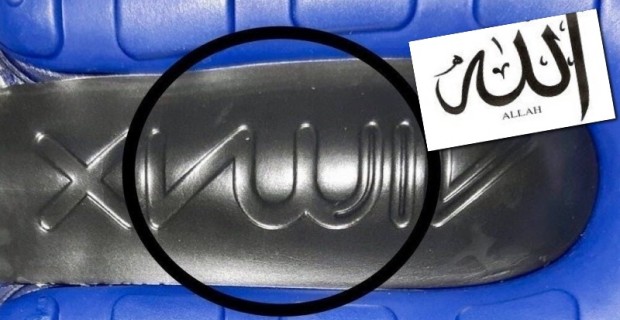 Thousands of offended Muslims have signed a petition demanding that Nike remove a “blasphemous” and “offensive” shoe that they claim has “Allah” inscribed on the sole.

They claim that the logo on Nike’s Air Max 270 trainers resembles the word “Allah” in Arabic script, “which will surely be trampled, kicked and become soiled with mud or even filth.”

The resemblance is minimal, but 6,000 people have signed a petition which asserts, “It is outrageous and appalling of Nike to allow the name of God on a shoe. This is disrespectful and extremely offensive to Muslim’s and insulting to Islam. Islam teaches compassion, kindness and fairness towards all.”

The petition demands that Nike recall the shoe “and all products with the design logo resembling the word Allah from worldwide sales immediately,” while also calling for stricter scrutiny of products before they enter the market.

This is just the latest example of Muslims becoming outraged over mere depictions of the word “Allah”.

Last year, Swedish fashion giant H&M was forced to recall a range of socks after Muslim customers claimed a pattern on them resembled the word “Allah,” despite the fact that the image was just a lego man holding a jackhammer.

Back in 1997, Nike was forced to apologize and recall a special range of basketball shoes after Muslims claimed a flame designed looked like the word “Allah”.

The sportswear giant also agreed to donate a $50,000 to an Islamic elementary school in the United States.