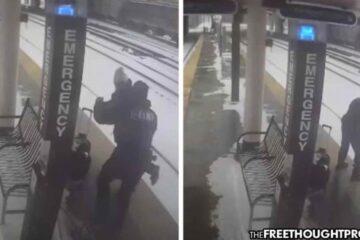 Cleveland, OH — Harrowing footage was released recently showing what led up to the multiple charges against an RTA police officer. According to the surveillance video from Brook Park Rapid train stop in Cleveland, RTA officer Patrick Rivera, 41, threw a mentally ill man off the train platform and onto the tracks as the trains were running.

RTA spokeswoman Linda Scardilli Krecic told Cleveland.com that Rivera was placed on unpaid leave after his arrest. He has since paid his $2,500 bond and was released from custody.

Amazingly enough, he was not fired immediately after the assault and will likely remain a cop even if he is found guilty on all charges after signing an agreement that states he can keep his job so long as he doesn’t mess up in the next year.

On that day, Rivera responded to the station because 68-year-old Edward McDermott, who is mentally ill, had his bag on a bench and didn’t move it for the custodian to clean. That is all.

TRENDING: Oklahoma: Cop Caught on Video Harassing, Fining Flood Victims for Trying to Help Each Other

If you read Rivera’s report, however, you would think that McDermott was a violent schizophrenic who attacked him and Rivera had no choice but to throw him out onto the live train tracks. Unlike Rivera, however, the video does not lie.

Rivera claimed in his report that McDermott lunged at him so he shoved McDermott to protect himself. According to the video, this isn’t true and McDermott appeared to have his back to the officer or was turning away when he was shoved out onto the train tracks.

Rivera then wrote in his report that McDermott stood up and immediately walked to the platform gate. However, according to the video, Rivera and another officer sadistically blocked the elderly man from getting off the train tracks and back onto the platform.

After assaulting and subsequently tormenting the elderly mentally ill man on the train tracks, Rivera arrested him for criminal trespassing and disorderly conduct, both fourth-degree misdemeanors.

In May, after a psychiatrist at Northcoast Behavioral Healthcare, a state-run psychiatric facility, found Edward McDermott incompetent to stand trial because of his unspecified mental illness, all the charges were dropped.

Before being charged this month, Rivera was never even suspended for the incident.

According to Cleveland.com, after the senseless attack on the elderly man, former RTA Police Chief Michael Gettings ordered Rivera attend just 40 hours of crisis intervention training and one day of de-escalation and judgement training.

Gettings’ report called Rivera’s actions “unacceptable” and “inappropriate,” yet he stopped short of firing the officer.

Unfortunately, this lack of accountability is a major problem with police in America today.