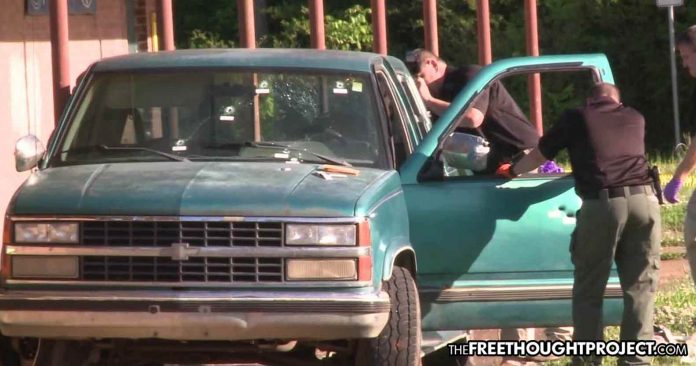 Oklahoma City, OK — A rather disturbing scene unfolded in Oklahoma City this weekend as police officers attempting to kill a robbery suspect opened fire on four small children, shooting three of them — one of them in the head.

According to police, they were searching for a robbery suspect when they found William Devaughn Smith, 21, in his pickup truck with the four children. When police made contact with Smith, they began shooting.

“As they tried to approach the suspect, there was an incident that happened. An officer involved shooting took place,” said OSBI Spokeswoman Jenny Virden.

During the shooting, police apparently didn’t care about or didn’t see the children in the pickup truck and so three of them were shot.

After shooting three children, police took to the press to point out the fact that not all of the children were shot as one of them luckily came out unscathed.

“I don’t know what these injuries are. And then one child, from what I understand was not injured,” said Virden.

“I mean my children, for crying out loud. Four innocent little children,” said mother of the injured children Olivia Hill.

Despite police claiming the children aren’t facing life-threatening injuries, Hill explained that her little girl has a bullet lodged in her brain.

“My 4-year-old daughter was shot in the head, and she has a bullet in her brain, and my 5-year-old has a skull fracture,” Hill said. “My 1-year-old baby has gunshot wounds on her face. My 2-year-old wasn’t touched with any bullets.”

HILL AND THE FOUR CHILDREN WERE IN THE PICKUP WITH WILLIAM DEVAUGHN SMITH, 21, WHEN TWO OFFICERS APPROACHED HIM AND GUNFIRE BROKE OUT FRIDAY IN HUGO, WHICH IS NEAR THE TEXAS STATE LINE, ARBEITMAN SAID. SMITH’S RELATIONSHIP TO HILL AND THE CHILDREN ISN’T CLEAR.

INVESTIGATORS HAVE NOT DETERMINED WHAT LED TO THE SHOOTING THAT ALSO WOUNDED SMITH, WHO WAS TREATED AT A HOSPITAL ABOUT 30 MILES (48 KILOMETERS) AWAY IN PARIS, TEXAS, THEN TAKEN TO A TEXAS JAIL ON AN OKLAHOMA ROBBERY WARRANT, ARBEITMAN SAID.

“What happened between the contact with him and when police fired, we’re still trying to put that together,” the spokeswoman said. “The OSBI is still investigating whether he fired at police and whether he was armed.”

While police haven’t said if Smith opened fire or not, no police officers were shot.

The officers who opened fire on the truck are all currently on paid administrative leave. Whether or not they will face charges is unclear. However, if history is any indicator, charges are unlikely.

As TFTP reported, police officers shooting and even killing children is a tragic occurrence that happens all too often. In December 2017, the Free Thought Project reported on the tragic death of 6-year-old Kameron Prescott whose life was stolen from him when police opened fire on an unarmed woman suspected of stealing a car. In June, the mother of the little boy who was gunned down by police found out that the cops who killed her son all went back to work.

Just last month, the family found out that none of the officers responsible for the death of her son will face charges.