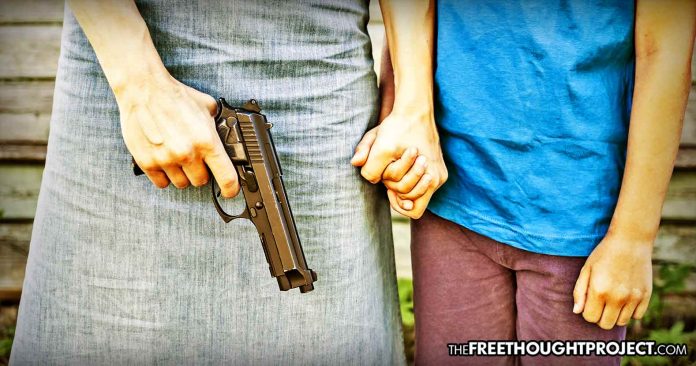 OKLAHOMA CITY, Okla. (TAC) – A bill prefiled in the Oklahoma Senate would prohibit state enforcement of any federal “red-flag” laws, setting the foundation to nullify any such laws in practice and effect.

Sen. Nathan Dahm (R-Broken Arrow) filed Senate Bill 1081 (SB1081) for introduction in the 2020 legislative session. Under the proposed law, the Oklahoma legislature would “occupy and preempt the entire field of legislation in this state touching in any way federal or state extreme risk protection orders against or upon a citizen of Oklahoma to the complete exclusion of any order, ordinance or regulation by any municipality or other political subdivision of this state. “ In effect, only the Oklahoma legislature could pass any type of so-called red-flag law effective in the Sooner State.

The legislation also would declare that any federal red-flag law “which would infringe upon a citizen’s Constitutionally-protected rights including, but not limited to the right to due process, the right to keep and bear arms and the right to free speech, shall be null, void, unenforceable and of no effect in the state of Oklahoma.”

These declarations would have very little effect in practice, but SB1081 includes provisions that would make federal red-flag laws nearly impossible to enforce in Oklahoma. The proposed law would prohibit any Oklahoma agency or any political subdivision from accepting any federal grants to implement any federal statute, rule or executive order, federal or state judicial order or judicial findings that would have the effect of forcing an extreme risk protection order against or upon a citizen of Oklahoma.

It would also make it a felony offense for any individual, including a law enforcement officer, to enforce a federal red flag law. In effect, this would bar state and local police from enforcing a federal red-flag law.

The federal government relies heavily on state cooperation to implement and enforce almost all of its laws, regulations and acts. By simply withdrawing this necessary cooperation, states and localities can nullify in effect many federal actions. As noted by the National Governors’ Association during the partial government shutdown of 2013, “states are partners with the federal government on most federal programs.”

Enforcing a red-flag law would be no different.

Based on James Madison’s advice for states and individuals in Federalist #46, a “refusal to cooperate with officers of the Union” represents an extremely effective method to bring down federal gun control measures because most enforcement actions rely on help, support and leadership from state and local governments.

“Partnerships don’t work too well when half the team quits,” said Michael Boldin of the Tenth Amendment Center. “By withdrawing all resources and participation in the implementation and enforcement of a federal red flag law, states and even local governments can help bring these unconstitutional acts to their much-needed end.”

The state of Missouri can legally bar state agents from enforcing federal gun control. Refusal to cooperate with federal enforcement rests on a well-established legal principle known as the anti-commandeering doctrine.

Simply put, the federal government cannot force states to help implement or enforce any federal act or program. The anti-commandeering doctrine is based primarily on five Supreme Court cases dating back to 1842. Printz v. U.S. serves as the cornerstone.

“We held in New York that Congress cannot compel the States to enact or enforce a federal regulatory program. Today we hold that Congress cannot circumvent that prohibition by conscripting the States’ officers directly. The Federal Government may neither issue directives requiring the States to address particular problems, nor command the States’ officers, or those of their political subdivisions, to administer or enforce a federal regulatory program. It matters not whether policy making is involved, and no case by case weighing of the burdens or benefits is necessary; such commands are fundamentally incompatible with our constitutional system of dual sovereignty”

SB1081 will be officially introduced and referred to a committee when the Oklahoma legislature convenes on Feb. 2.