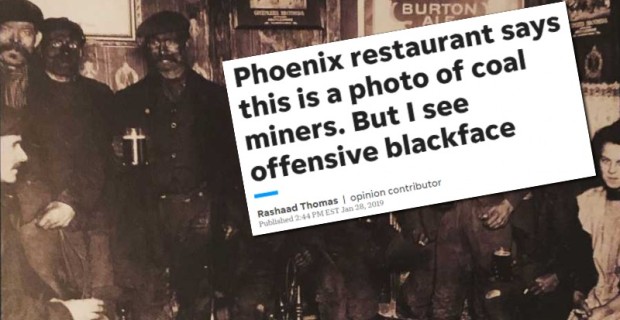 An opinion columnist for The Arizona Republic newspaper penned an article in which he claimed that an old photograph of coal miners covered in soot was racist because it reminded him of “offensive blackface”.

In a piece entitled Phoenix restaurant says this is a photo of coal miners. But I see offensive blackface, Rashaad Thomas relates the story of how he was triggered after seeing the photograph hanging on the wall in a downtown Phoenix bar.

Despite his friends telling him, “It’s coal miners at a pub after work,” Thomas demanded to speak to a manager, before he told someone he describes as a “white restaurant owner” that he found the photograph “offensive” because he felt that it resembled blackface.

Thomas even directly admits that “the photograph shows coal miners’ faces covered in soot,” but then ludicrously asserts that “context” doesn’t matter, only his feelings being hurt matters.

He then goes on to spout a series of pretentious platitudes such as “in art, everyone sees something different” to justify forcing the bar to take down the photograph.

After claiming that he is discriminated against because of his skin color, Thomas asserts, “At the downtown Phoenix restaurant, my concern that the photograph of men in blackface was a threat to me and my face and voice were ignored….A business’ photograph of men with blackened faces culturally says to me, “Whites Only.” It says people like me are not welcome.”

This despite having already established that the photograph was of coal miners in a pub after work and was not white men engaging in “blackface”.

The article concludes with Thomas demanding that the photo “should be taken down….for the greater good.”

This entire farce once again underscores the soft tyranny that leftists are attempting to impose on the world, forcing other people to change their environment and bow to every demand simply because progressives claim their feelings are hurt.

As writer Andrew Doyle points out, the fictional character Godfrey Elfwick, a parody of a permanently offended social justice warrior, actually tweeted about being offended by the same photograph back in August, meaning leftists are now directly imitating comedic characters created to satirize them.

The New York Times also recently published an article claiming that Mary Poppins’ face being covered in soot (she appears in a famous scene with chimney sweeps) is also actually an example of blackface.

When leftists precisely ape the behavior of fictional characters created to ridicule their oversensitivity, how is it even possible to joke about their behavior anymore?

What is going on?!

Godfrey Elfwick tweeted about miners in blackface years ago & now this story appears in @azcentral.@TitaniaMcGrath tweeted a post about Mary Poppins being guilty of blackface in September 2018, now we have this in @nytimes.

Are these satirists or prophets? pic.twitter.com/M9N9OwNGrQ