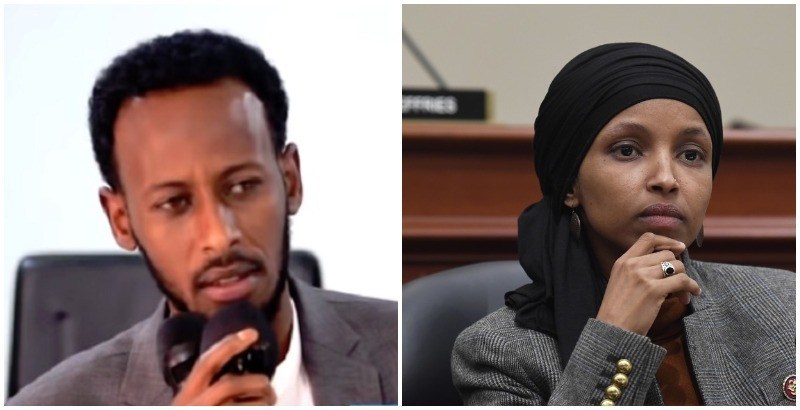 Leave it to the Muslims to just turn on each other and point the finger. This is the latest in the scandal of crimes committed by Rep. Ilhan Omar (D-MN). According to a new report, Ahmed Hirsi, her husband and father of her children, is telling friends that not only did Omar marry her brother, but issued threats against him and asked him to lie for her.

In questioning “highly reliable source in the Omar saga,” Scott Johnson of The Powerline writes:

They open a window onto the scandals from the perspective of Ahmed Hirsi, her long-time partner and the father of her three children. According to sources, Hirsi is telling friends:

• that he will not go to jail for Omar;

• that while Omar did indeed marry her brother (Ahmed Elmi) for fraudulent purposes, Hirsi did not know at the time that she had married Elmi;

• that Omar is threatening Hirsi he would be in trouble along with her if the truth were to come out;

• that Omar has asked him to state publicly that all is well with their marriage even though it is completely done and finished; and

• that in fact they are living apart and have been divorced under Islamic law (although they remain legally married).

Having humiliated Ahmed Hirsi by her affair with Tim Mynett, Omar now wants Hirsi to perform public relations services for her to suppress the scandal. That is cold.

Yeah, I’ll say it’s cold, but that is following right in the footsteps of a murdering, thieving pedophile who founded Islam, Muhammad. It wouldn’t surprise me to discover that Omar just must find herself following in more of his footsteps.

Interestingly enough, the same outlet that hung a mural of Omar in their headquarters, the Minneapolis Star Tribune, also believes that Omar married her brother.

At the end of June, the Star Tribune wrote:

Omar’s reticence is consistent with near total silence she has maintained for three years amid questions raised through public records picked over by conservative opinion journalists intent on proving that she committed immigration fraud. Those attacks, she once tweeted, are the provenance of “fake journalists on bigoted blogs.”

“Since before she was elected to office, Ilhan has been the subject of conspiracy theories and false accusations about her personal life. Emboldened by a president who openly treats immigrants, refugees and Muslims as invaders, these attacks often stem from the presumption that Ilhan — like others who share those identities — is somehow illegitimate or not fully American.

“Ilhan has shared more than most public officials ever do about the details of her personal life — even when it is personally painful,” he continued. “Whether by colluding with right-wing outlets to go after Muslim elected officials or hounding family members, legitimate media outlets have a responsibility not to fan the flames of hate. Continuing to do so is not only demeaning to Ilhan, but to her entire family.”

It looks like Omar is about to learn that hard way that you can’t commit crimes and get away with them. That is unless spineless cowards in Minnesota and DC fail to do their duty and bring her to justice.

This would blow the lid off of a substantial amount of crimes that would be tied to the jihad Minnesota representative.