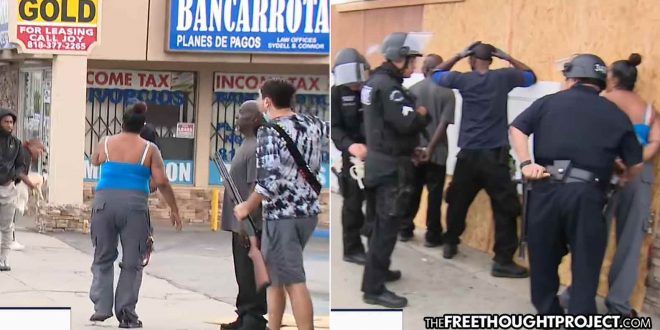 (RT) Police have detained store owners who used firearms to defend their premises from alleged looters in Los Angeles. The dramatic incident was caught in a live broadcast by a local news crew.

The tense standoff at the city’s Van Nuys neighborhood was filmed by a FOX 11 news crew. According to the reporter at the scene, several vehicles drove up to a gold store, and a group of apparent looters attempted to enter the premises. They were confronted by the store’s owners, two of whom were wielding shotguns. Another person at the scene had a large machete-type knife on his belt.

The people, identified by the reporter as the store’s owners, were heard yelling: “We’re closed, bro.” When the police arrived, several men had fled the scene, and were chased down by the officers.

The police handcuffed and detained the people that had come out of the shop, prompting the reporter to shout: “They’re the store owners! They’re protecting the store!”

Los Angeles is among the several major US cities that have seen massive protests, triggered by the death of George Floyd, an unarmed black man, during an attempted arrest by a white police officer, Derek Chauvin.

Chauvin was fired from the police force, arrested, and charged with third-degree murder and second-degree manslaughter. The news did not quell the protests, though. Many of the marches and rallies were peaceful. However, intense rioting, looting, and clashes with police occurred in many places as well, mostly during the afternoon and night.

This is Why There are Riots: Cop Caught on Video Attacking Elderly Disabled Man Salt Lake City, UT — As most Americans watch the country burn from the comfort of their living rooms, many of them are wondering why people are out in the streets with so much anger in the first place. As Dr. Martin Luther King Jr. famously brought up before he was executed: A riot is the language of the unheard. People are tired of watching cops kill unarmed and often innocent people only to keep their jobs and pensions while the taxpayers of these cities take the brunt of the responsibility.

While we would never condone the destruction of private property to make one’s point, we understand the anger and helplessness felt by those who would. Also, it is hard not to get angry when cops are arresting reporters and conducting drive-by pepper sprays. Or, as the following incident out of Salt Lake City illustrates — attacking disabled elderly men.

Apparently the incidents of police brutality were so rampant over the weekend in Utah that cops were caught on live TV as local ABC 4 News was reporting. As the video shows, an elderly gentleman was simply standing on the sidewalk and didn’t appear to even be involved in the protest. However, his innocence had no bearing on the cops who began shoving him.

As he tried to walk away, the officer — who was apparently not smart enough to hold his shield the right way — attacked the elderly man from behind, sending him hurling to the concrete below. Given the man’s age, a fall like that could’ve ended his life. Luckily, he escaped without serious injury.

After the video began to go viral, Salt Lake City Police Department Chief Mike Brown was forced to issue a statement, and an apology.

“It was inappropriate,” Brown said in an video statement. “This is not what I would expect from the Salt Lake City Police Department. My expectation is if people are exercising their First Amendment rights, we give them the space to do so peacefully.”

Brown said he personally apologized to the man in the video, before going on to praise the rest of the cops who were out that day — like the ones who stood by and did nothing as they watched two of their brothers in blue attack an innocent elderly disabled man.

Brown said he has opened investigation though Internal Affairs and the Civilian Review Board. In other words, the citizens of Salt Lake City can expect more of the same.

The community organization Utah Against Police Brutality released a statement following the protest in Salt Lake City over the weekend. It sums up the sentiment well as it reads in part:

Mayor Mendenhall said that the events around the May 30 protest aren’t what justice looks like. We agree. This is what a demand looks like, a demand that can’t be ignored any longer. Justice would have been enacting real police reform, firing killer cops, addressing the systemic and constant racism. Justice would have been addressing the economic inequality, wage theft, exploitation, and poverty that plague every worker. Justice would have been listening to those of us who have been demanding changes for years. Bernardo, Cody, Patrick, Dillon, Harold, Elijah, and all the other people killed by Utah cops were still alive, or if their killers were in jail. Justice is when people like George Floyd no longer have to fear death at the hands of those who claim to “serve and protect.”

Below is just one reason of many why unrest in this country is growing.

Until incidents like these stop, we can expect to continue to see angry people in the streets. If you want to know how to stop this endless sea of police brutality, here are five very easy ways to address the problem quickly.