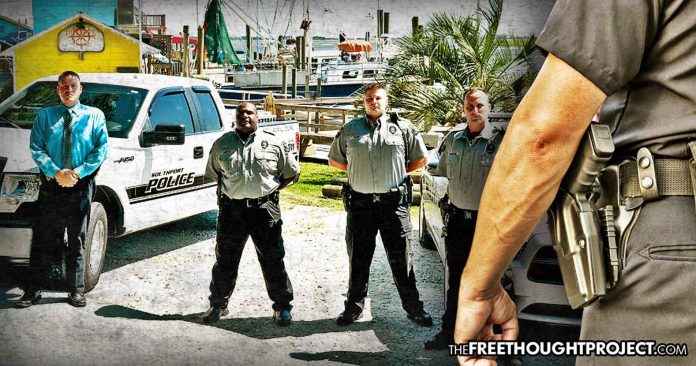 Southport, NC — All too often those who continuously apologize for crimes committed by police officers are able to justify some of the most egregious instances of outright murder by claiming the officer was a bad apple. Almost as often, however, as TFTP has shown numerous times, the bad apple theory is exactly that—a theory—with no evidence to support it.

Illustrating the nature of the bad apple theory is the fact that another entire police department in North Carolina was suspended recently after the department’s chief and lieutenant were arrested on conspiracy charges.

Chief Gary Smith, 46, and Lt. Michael Christian Simmons, 48, were both charged with conspiracy to obtain property by false pretenses, willful failure to discharge duties, and obstruction of justice, according to CBS17.

State investigators said Smith and Simmons were driving overnight shifts for an unnamed local trucking company during the same hours they had claimed on their daily activity reports for the Southport Police Department.

David said Smith and Simmons’ duties for the trucking company routinely required them to be out of town and even out of the county.

Smith was taken into custody Thursday morning and booked into the Brunswick County Detention Center under a $10,000 unsecured bond. He was later released after posting bail.

Simmons was taken into custody during Thursday afternoon’s news conference announcing the results of the investigation.

“It is indeed that I get before you today with a heart laden with grief for all these events that happened today,” said Mayor Jerry Dove. “It was a shock to me to hear all these, being a former chief and knowing the officers that worked in that department and hired at least half of them.”

For the time being, the Brunswick County sheriff’s office has moved in to cover for the duties of the police department and there are no issues.

“We will be relying on (the sheriff’s office) substantially on the road ahead to step into the void and provide a police presence,” District Attorney Jon David said. “The sheriff’s office already has overlapping jurisdiction with Southport. It’s not new that they would be patrolling these streets. They know the lay of the land and I’m very confident that citizens will be well protected.”

According to David, at least one of the suspended officers is the reason the others were exposed as he came forward to shine light on the corruption.

Entire police departments getting suspended for rampant corruption is not uncommon. In fact, as TFTP reported last year, the entire drug unit of Troy, New York’s Police Department was placed on administrative leave following reports that the unit entered a home without a warrant.

According to the Times Union, the officers entered a home after they were tipped off by another Capital Region police agency. But then they lied about it.

Apparently, they realized they made a major mistake, but then compounded their problems by attempting to cover their tracks. They allegedly filed a false burglary report.

More recently, four people in the Llano Police Department, including Police Chief Kevin Ratliff, were arrested earlier this year for being bad cops.

There are eight law enforcement officers employed by the Llano Police Department, according to the LPD’s website, meaning that half of the police force has been indicted.

Do these instances seem like “one bad apple,” or a potentially much greater problem?