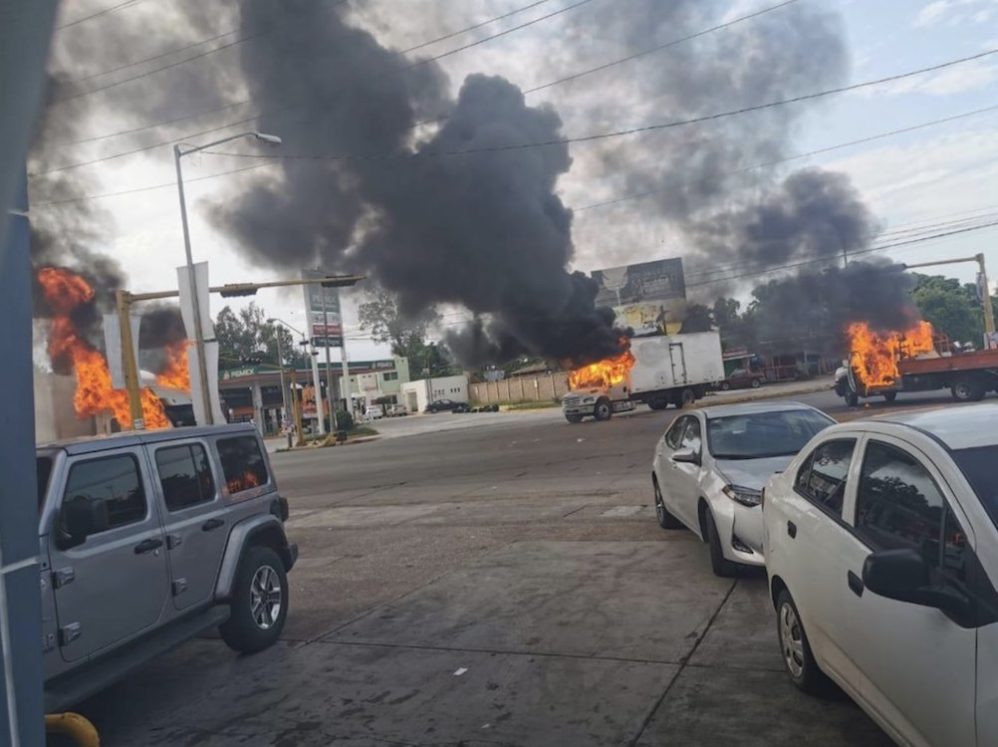 Democrats either don’t care or don’t seem to realize what they are messing with.

Their quest for votes is a dangerous game.

Forget the votes for a moment because they are jeopardizing the lives of every American every single time they claim a small victory against construction of the Southern Border Wall.

Believe it or not, a drug cartel recently defeated the Mexican military.

Here’s more from The Federalist…

The southwest U.S. border might be quieter now than it was this spring at the height of the migrant crisis, but south of the Rio Grande the Mexican state is disintegrating.

Last Thursday in the city of Culiacan, the capital of Sinaloa state, a battle erupted between government forces and drug cartel gunmen after the Mexican military captured two sons of jailed drug kingpin Joaquin “El Chapo” Guzman. The elder son, Ivan, was quickly freed by his men, who overpowered government forces and secured his release. Ivan then launched an all-out siege of the entire city in an effort to free his younger brother, Ovidio.

Armed with military-grade weapons and driving custom-built armored vehicles, cartel henchmen targeted security forces throughout Culiacan, launching more than one dozen separate attacks on Mexican security forces. They captured and held hostage eight soldiers, then kidnapped their families. Amid the fighting, an unknown number of inmates escaped from a nearby prison. At least eight people were killed and more than a dozen were injured.

The eight-hour battle ended when government forces, outgunned and surrounded, without reinforcements or a way to retreat, received an order directly from Mexican President Andres Manuel Lopez Obrador to release their prisoner and surrender. Lopez Obrador later defended this decision, insisting that his security strategy is working and saying, “Many people were at risk and it was decided to protect people’s lives. I agreed with that, because we don’t do massacres, that’s over.”

Mexican president says they had to release the son of drug kingpin Joaquin 'El Chapo' Guzman after an intense battle between security forces and cartel gunmen as 'the situation became very difficult' and 'many people were at risk' https://t.co/guzODO7t8i pic.twitter.com/uFAU0pDCfD

The Mexican State Is Collapsing

The battle of Culiacan marks a turning point in the collapse of the Mexican state. There is now no doubt about who is in control of Sinaloa, let alone the rest of the country. Cartel forces seized a major regional capital city in broad daylight and defeated the national armed forces in open battle.

Violence is rampant across Mexico. Earlier in the week, more than one dozen police officers were massacred in a cartel ambush in western Mexico. A day later, 14 suspected gang members were killed by the Mexican Army. Homicides in Mexico this year are on track to surpass last year’s record total of more than 29,000.

I’ll be honest in saying I had heard rumblings and seen headlines about this story, but had no idea that Mexico was FORCED to release Ivan.

They seemingly had no choice.

Sometimes we make the mistake of not paying enough attention to what is happening beyond our borders.

The story was spun by some media outlets to make it look like they released Ivan in the best interest of everyone, NOT that they were overrun and had no choice.

Is this what we want in America?

Do we want drug cartels opposing our own National Guard and police ON AMERICAN SOIL?

The Democrats, and their open border idiocy, need to go away.

Even many/most Democrat voters oppose the Dem plans to leave the border open to all.

See what the Liberal journalist found in the above link.

This is a totally manufactured stance to oppose Trump.

As would the DNC Chair Tom Perez.

These are very dangerous games that Democrats are playing with YOUR safety.