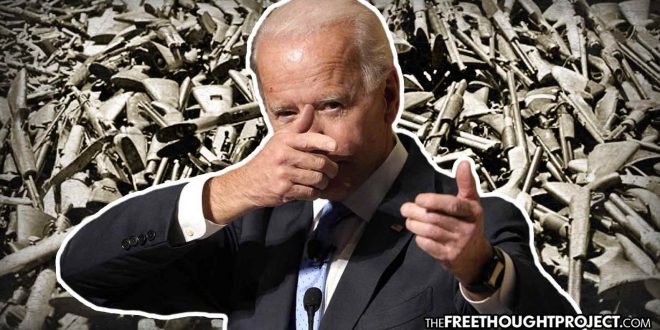 On Tuesday, Stef Feldman, the national policy director of Joe Biden’s presidential campaign, announced in a meeting put on by the Georgetown Institute of Politics and Public Service, that gun control is at the top of Biden’s list. There will be no vote or democratic process, and like Trump and Obama before him, Biden will use Execute Orders to implement his will.

Feldman pointed out that when he gets in the White House, Biden is planning to “make big, bold changes through executive action, not just on policing and climate like we talked about previously, but in healthcare and education, on gun violence, on a range of issues,” adding, “there’s really a lot you can do through guidance and executive action.”

This statement should come as no surprise as Biden has been an outspoken gun grabber and on his campaign website, he’s stated that he will use executive action to enforce gun control.

On the site, Biden states that he will use executive action to “get weapons of war off our streets.” Calling an AR-style weapon a “weapon of war” is laughable given the fact that Biden, under president Obama, aided in the wholesale slaughter of countless innocent civilians in Afghanistan, Iraq, Yemen, Libya, and Somalia — using actual “weapons of war” like drone strikes, hellfire missiles, and sanctions.

Nevertheless, the new boss — who is the same as the old boss, contrary to what many believe — plans to immediately ban the “manufacture and sale of assault weapons and high-capacity magazines.”

Biden also plans to force all legal gun owners to register their firearms with the state, or be forced to turn them in, going so far as to issued an ultimatum.

This will give individuals who now possess assault weapons or high-capacity magazines two options: sell the weapons to the government, or register them under the National Firearms Act.

Biden also plans on instituting legislation that will limit how many guns you can purchase. On top of that, he plans on telling you how you can purchase them by banning the “sale of firearms, ammunition, kits, and gun parts online.”

Perhaps one of Biden’s most ominous moves in regard to controlling guns is his push for “smart gun technology” that will require biometrics to fire in an ostensible move to “prevent unauthorized use.” In reality, however, this paves the way for bad actors, including the state and hackers, to be able to control, hack, or essentially turn off your gun, making it a paperweight.

Biden also plans to pick up where Trump left off in regard to extreme risk laws, also called “red flag” laws. Under Biden’s plan, which is similar to the many plans implemented under Trump, family members or law enforcement officials will be able to make claims — many which involve no evidence — allowing a person’s guns to be temporarily taken until that person is declared fit enough to get them back.

But would grabbing guns from people deemed a risk by the state actually have any effect on mass violence? Not likely, nor would the stronger background checks that Biden is also pushing for.

The elements of that legislation are mostly window dressing that would do little or nothing to prevent attacks like these. The most frequently mentioned policy, “universal background checks,” is plainly irrelevant to these particular crimes, since both the El Paso shooter and the Dayton shooter purchased their weapons legally, meaning they did not have disqualifying criminal or psychiatric records. Nor do the vast majority of mass shooters, who either passed background checks or could have. Neither requiring background checks for private transfers nor creating “strong background checks,” as President Donald Trump has proposed (perhaps referring to the same policy), would make a difference in such cases.

Citizens who are targeted by these laws will be deemed guilty first and only after their guns are taken, will they have a chance to defend themselves in court. This is the de facto removal of due process.

In spite of what officials and the media claim, when a person is stripped of their constitutional rights, albeit temporarily, without being given the chance to make their own case based on what can be entirely arbitrary accusations, this is the removal of due process. And, contrary to what Biden wants, it doesn’t work.

We’ve seen this play out before already. Last year, a tragedy unfolded in California as a deranged gunman, Kevin Douglas Limbaugh, walked up on an innocent woman, officer Natalie Corona, pulled out his guns and began shooting her repeatedly until she died. Limbaugh then fired several more shots at others before turning the gun on himself and taking his own life. Had more people been nearby, Limbaugh would’ve likely carried out a mass shooting.

Limbaugh’s case is important to bring up due to the fact that — before he killed a cop — he was subject to California’s “red flag” laws in 2018. Limbaugh was given a high-risk assessment that ordered him to turn in his registered weapons to police, the only one being a Bushmaster AR-15. On November 9, Limbaugh turned in the weapon.

Despite being banned from possessing a weapon, he still obtained one illegally and used it to commit murder. Laws do not stop those willing to break them.

What’s more, there were already laws on the books that should’ve stopped Nikolas Cruz, the murdering psychopath in Parkland Fl, from ever getting a gun as well. But none of them worked.

Citing Cruz as the reason for advocating the erosion of the 2nd Amendment, the anti-gun activists are claiming he should’ve had his guns taken which would have prevented the tragedy. Sadly, however, they are ignoring the fact that he was accused of multiple felonies by multiple people—and should’ve never been able to purchase a gun in the first place—but law enforcement failed to act on any of it. These threats included specifically saying he was going to carry out a mass shooting and threatening to kill individual people.

The reactionary nature of disarming law-abiding Americans because deranged psychopaths kill people is dangerous and only serves to keep the guns out of the hands of law abiding citizens as the above two cases illustrate. Moreover, as Biden attacks, guns, he is forgetting that deranged psychopaths don’t even need guns to cause mass death.

Despite all this information to the contrary, the left led by Biden and the right led by Trump seem hell bent on further eroding the rights of the 99.9999999 percent of the innocent people who are not murderous psychopaths. And all of it will be and has been “legal” — due process and innocence be damned.