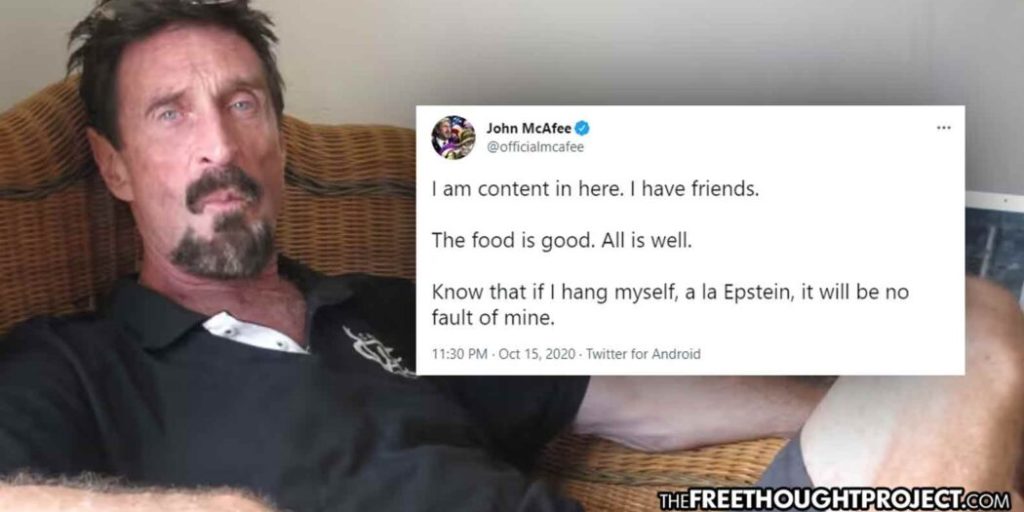 It has been an entire year since John McAfee died — allegedly by suicide — in a Spanish prison and since that day, authorities have refused to release his body.

Since his death last June, the internet has abounded with conspiracy theories over how John McAfee died. Adding fuel to the conspiracy fire was the fact that the Spanish government — who was holding him on charges of tax evasion to be extradited to the United States — has held his body and refused to allow the family to see it.

After suspiciously holding his body for 7 months, in February a Spanish court ruled that McAfee took his own life. This ruling by the judge confirmed the findings of the original autopsy which declared his death a suicide.

As she did with the original ruling, McAfee’s widow, Janice McAfee, has appealed the ruling, insisting her husband was murdered.

Joy Athanasiou, a lawyer for McAfee’s daughter – identified only as Jen – told the financial news site MarketWatch that Janice immediately appealed the decision to a higher court at the time, though she noted that there was no timetable yet on when the higher court would rule on the appeal.

“At this point, we don’t really know much aside from the ruling. It’s been a long, strange process,” Athanasiou told MarketWatch.

Adding credence to Janice’s claims is the fact that McAfee himself said he was “content” in jail and had no plans to kill himself “like Epstein.”

Problem is: he was claiming to do well in prison and insisted that "if I hang myself, a la Epstein, it will be no fault of mine"🤔 https://t.co/1oyEMPtMbZ pic.twitter.com/J8E5ugsx43

John McAfee did not kill himself.

One 2019 tweet from McAfee, who was known for freely speaking his mind, however outlandishly, warned the former tech mogul was getting “subtle messages” from US government officials that they were going to have him killed and make it look like a suicide.

He even got a tattoo, reading “whackd,” which Twitter users began turning into a hashtag, along with #McAfeeDidntKillHimself, shortly after his death was announced.

Getting subtle messages from U.S. officials saying, in effect: "We're coming for you McAfee! We're going to kill yourself". I got a tattoo today just in case. If I suicide myself, I didn't. I was whackd. Check my right arm.$WHACKD available only on https://t.co/HdSEYi9krq🙂 pic.twitter.com/rJ0Vi2Hpjj

After his death in June of 2021, and after not hearing anything for weeks, McAfee’s wife Janice speculated that the Spanish authorities had no sense of urgency into investigating his death — and it appears she is correct.

“There has been no since (sic) of urgency from the various Spanish authorities involved in the investigation into John’s death and there is clearly a cover up happening here concerning the events surrounding his death,” she tweeted weeks after his death.

“We have not received the death certificate, the official autopsy report or the official report from the prison,” she continued. “I understand that things take time but the lack of cooperation from the Spanish authorities only confirms our suspicions that they have something to hide.”

The fact that they have kept his body for an entire year lends credit to this claim. However, it was reported that McAfee attempted suicide back in February 2021. Whether or not this is true is unclear and it is also important to point out that this same claim was made with Jeffrey Epstein.

McAfee was on the Free Thought Project Podcast back in March of 2020 as the pandemic tyranny began to unfold. He was an outspoken and extremely eccentric man. This British-American computer programmer, cryptocurrency and security advocate, quickly found himself at the top of the American law enforcement’s most wanted list.

He was outspoken about not paying taxes and he refused to allow any government to rule over him. Though he ran for the US presidency as a Libertarian, unsuccessfully, he was the anarchist’s anarchist and lived that way until his death.