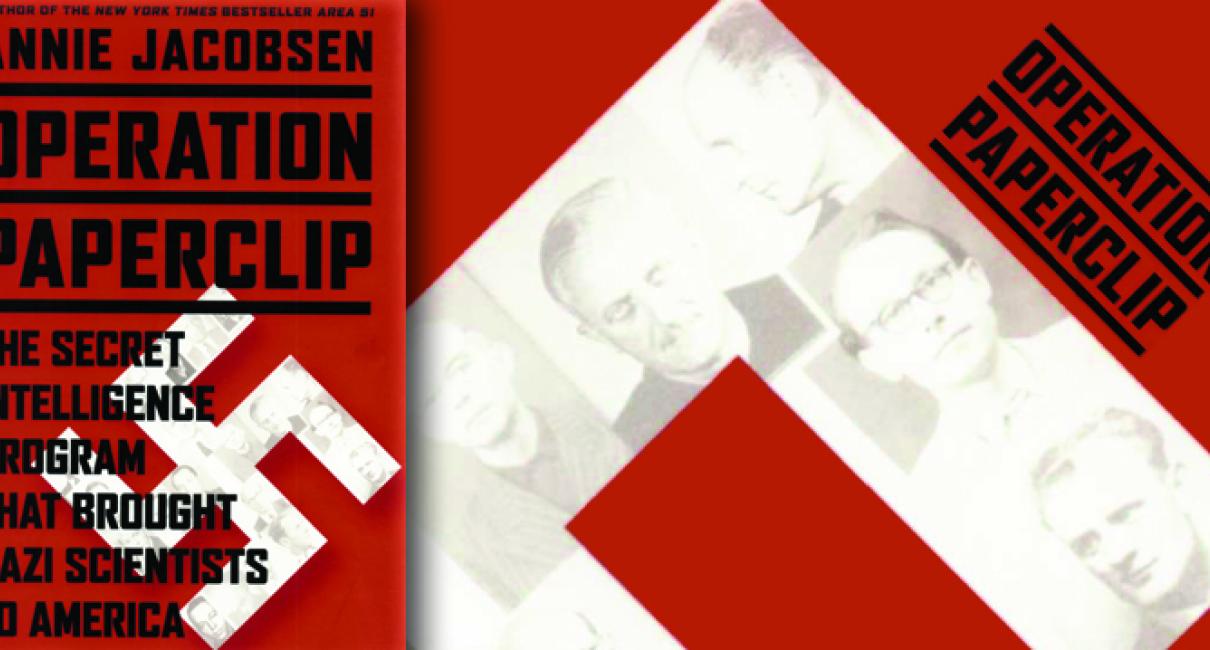 The Bush dynasty is a crime family that rivals anything the Clintons have been involved in. Among those things the Bushes have been involved in, George W. Bush’s grandfather helped bring Nazis to the US via Operation Paperclip and W’s father George H. W. Bush’s involvement in the Central Intelligence Agency was only a stepping stone to building a New World Order.

The below event was recorded February 26, 2014 at Politics & Prose bookstore in Washington, D.C.

Author Annie Jacobsen presents a fascinating topic from her new book, Operation Paperclip, and takes questions from the audience.

Jacobsen is the author of Operation Paperclip: The Secret Intelligence Program that Brought Nazi Scientists to America

The CIA even backs the claims of Jacobsen.

According to the CIA website in a review by Jay Watkins:

As World War II ended, the race was on with the Soviet Union to seize as many German scientists as possible in anticipation of the Cold War. The full story has remained elusive until now. Operation Paperclip, by Annie Jacobsen, provides perhaps the most comprehensive, up-to-date narrative available to the general public. Her book is a detailed and highly readable account of the program. Jacobsen compiled extensive primary and secondary sources, duly annotated in over 100 pages of notes and bibliography. In it are many new sources, among them US government records (President Clinton’s “Nazi War Crimes Disclosure Act”), German archival records, first-person accounts, memoirs, and letters. The book also contains a useful index and biographies of the principal players.

Jacobsen offers a detailed chronology of events related to Operation Paperclip. Because of its scope and the introduction of so many characters, the narrative could have been improved if the author had focused on a shorter list than the 89 individuals profiled and maintained more topical continuity. Nevertheless, the book is a compelling work with interesting historical and personal revelations, for example:

Werner von Braun is well known to those who remember the Apollo moon landing. During the Ford administration, von Braun was almost awarded the Presidential Medal of Freedom—until one of Ford’s senior advisors, David Gergen, objected to his Nazi past.

Less well known is that another 120 fellow German scientists, engineers, and technicians developed the Saturn V launch vehicle, or that the Launch Operations Center at Cape Canaveral, Florida, was headed by Kurt Debus, an ardent Nazi. The Vertical Assembly Building—bigger in volume than the Pentagon and almost as tall as the Washington Monument—was designed by Bernhard Tessmann, former facilities designer at the German missile launch facility at Peenemuende.

In 1949, the CIA created the Office of Scientific Intelligence. Its first director, Dr. Willard Machle, traveled to Germany to set up a special program to interrogate Soviet spies. The CIA believed the Russians had developed mind-control programs and wanted to know how US spies would hold up against this capability if caught. He also aimed to explore the feasibility of creating a “Manchurian candidate” through behavioral modification. Thus, Operation Bluebird was born. Bluebird, later called MKULTRA, was a research activity experimenting in behavioral engineering of humans. The Nuremberg Code prohibits experimentation with humans without their consent. During this program, Dr. Frank Olson, a US Army biological weapons researcher, was given the drug LSD without his knowledge, leading to his death by leaping from a building. DCI Richard Helms ordered much of the documentation destroyed, and the circumstances of his demise remain controversial to this day.

Although she understandably questions the morality of the decision to hire Nazi SS scientists, Jacobsen balances her judgment with an understanding of the perceived threat of the Soviet Union under Stalin and the communists’ dialectical determination to prepare for total war with the West. The Soviets similarly captured and used German scientists for their own defense programs. That side of the story is not covered in this book.

Jacobsen provides insights on joint intelligence coordination and cooperation among US services and Allies; operational deconfliction; document and foreign materiel acquisition and exploitation; interrogation techniques; active tracking; production of foreign intelligence; surveillance and countersurveillance methods; and negotiating the sometimes conflicting objectives of the judiciary and the Intelligence Community (i.e., “hang them” vs. “hire them!”).

Just keep in mind that this is the same CIA decades later, crumbling from its own corruption, that claims to be bringing you security while they were part of the problem of smuggling Nazis into the US.