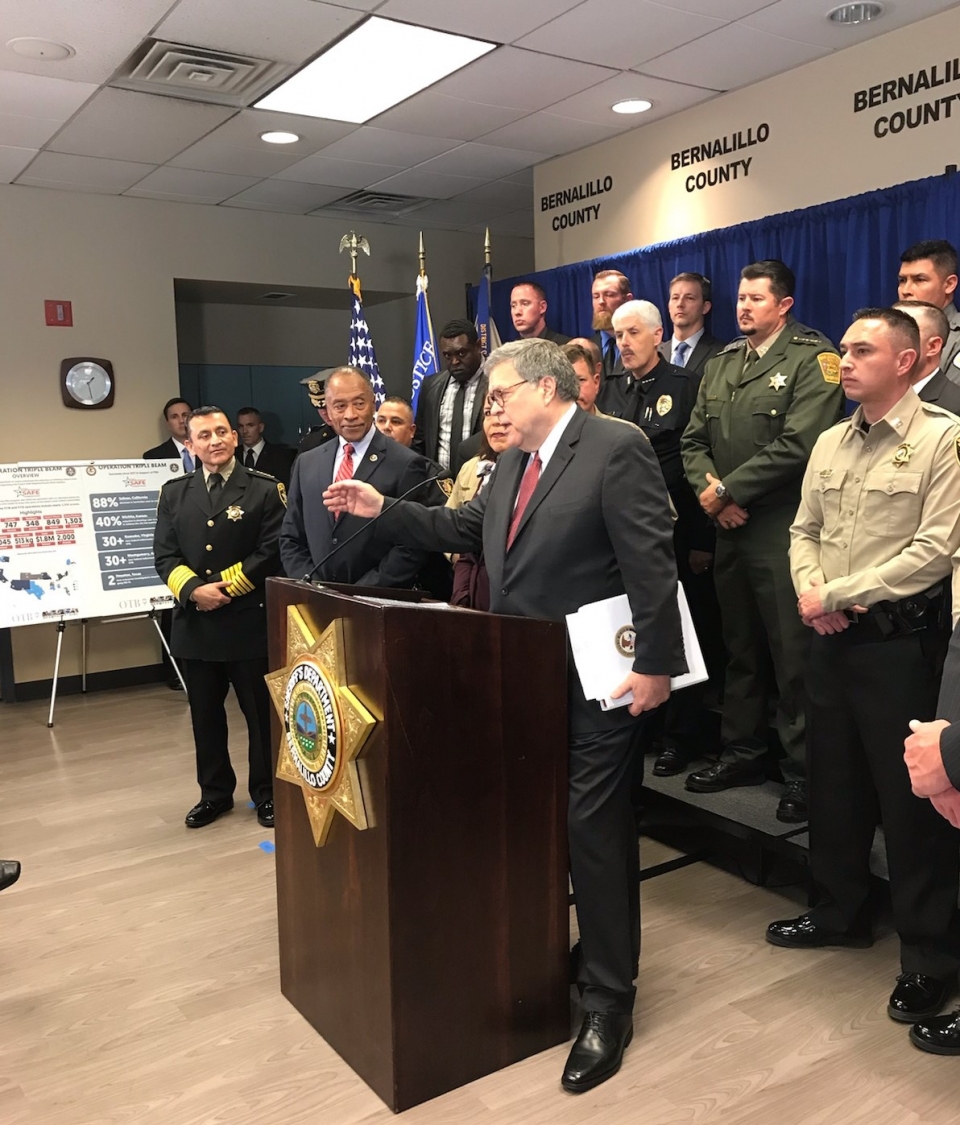 A large-scale, 90-day law enforcement operation, known as “Operation Triple Beam Albuquerque,” concluded on Oct. 31, 2019, with the arrests of 327 alleged fugitives from throughout Bernalillo County and the Albuquerque, New Mexico metropolitan area.

During OTB Albuquerque, SWIFT located and apprehended 327 alleged state, local and federal fugitives, including 59 state probation and parole absconders, 10 individuals wanted for homicide, 20 for weapons offenses, 13 for sex crimes, 50 for assault, and 91 on narcotics charges. In the Santa Fe and Farmington communities, investigators made 92 arrests.

The operation resulted in the seizure of 43 illegal firearms, more than 50 pounds of methamphetamine, four pounds of heroin, and two pounds of cocaine. In addition, 31 stolen vehicles were recovered and $50,000 was seized.

“I commend the work of the brave men and women of the U.S. Marshals Service on their outstanding execution of Operation Triple Beam, a nationwide effort by the Marshals to target violent, gang-related crime in some of America’s most dangerous cities,” said Attorney General William P. Barr. “The Marshals are truly America’s fugitive hunters, with a proud tradition dating back to the founding of the United States. Their unyielding commitment to justice, in partnership with our state and local colleagues, made this initiative a great success.”

“We brought Operation Triple Beam, our mobile gang enforcement platform, to Albuquerque to target the gang-related fugitives fueling the violent crime in the area,” said US Marshals Service Director Donald Washington. “The U.S. Marshals in the District of New Mexico, along with dedicated inspectors in our Investigative Operations Division, and all of our partner agencies, achieved results that illustrate our full commitment to make communities safer by addressing violent crime at its core and taking the worst of the worst off the streets. The good citizens of New Mexico have our enduring support.”

“The U.S. Attorney’s Office is committed to working with its law enforcement partners to combat violent crime throughout New Mexico,” said U.S. Attorney John C. Anderson. “We commend the U.S. Marshals Service for regularly leading multi-agency operations like Triple Beam throughout the state that have made our communities safer by taking hundreds of fugitives off our streets.”

“Operation Triple Beam was an outstanding public safety effort by all personnel involved, and the unified approach for law enforcement resulted in hundreds of arrests, including many for dangerous outstanding warrants. I remain committed to collaborating with local and federal authorities to keep our children, families, and businesses safe,” said Bernalillo County Sheriff Manuel Gonzales III.

This is the second OTB conducted by the U.S. Marshals in New Mexico this year. OTB Las Cruces concluded April 12, 2019, with the arrest of 154 fugitives throughout Dona Ana County; there were 115 felony arrests within the City of Las Cruces.

OTB provides communities with immediate relief from violent, gang-related crime and targets fugitives who commit violent crime and those who provide them safe harbor. Since the Department of Justice reinvigorated Project Safe Neighborhoods in 2017, U.S. Marshals have launched 33 OTB collaborations of local, state, federal and tribal law enforcement agencies in some of the nation’s most violence-plagued communities, resulting in more than 6,000 arrests, 1,200 firearms confiscations, and the seizure of $1.8 million.

Courtesy of The Department of Justice