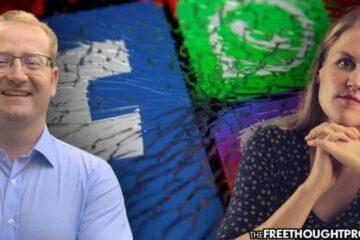 In case you’ve been under a rock, earlier this week, an alleged “Facebook Whistleblower,” Frances Haugen came forward to inform the world that Facebook is destructive — as if the entire world didn’t already know the dangerous effects of social media.

While Haugen did hand over tens of thousands of documents that show Facebook executives are well aware of the troubling impact of their site to the Securities and Exchange Commission, her entire argument and alleged exposé on Facebook is anticlimactic at best. What’s more, it will only serve to benefit Facebook and the rest of Big Tech in the long run.

In fact, after Haugen came forward with her information, Facebook’s director of policy communications Lena Pietsch released a statement — temporarily writing off her claims — but then agreeing with her proposals!

“We don’t agree with her characterization of the many issues she testified about,” wrote Pietsch. “Despite all this, we agree on one thing; it’s time to begin to create standard rules for the internet. It’s been 25 years since the rules for the internet have been updated, and instead of expecting the industry to make societal decisions that belong to legislators, it is time for Congress to act.”

That’s all the world needs, Facebook — whose been handing your information to the feds, spying on users and selling their data, and allowing children to be sold on their platform — creating the rules for the internet.

In what world does a high level executive issue a statement agreeing with someone who is allegedly exposing them? The entire premise is silly, to say the least — but also extremely suspect.

When whistleblowers like Reality Winner, Edward Snowden, Chelsea Manning, or Julian Assange, blow the whistle and expose election fraud or US war crimes, these people are exiled, kidnapped, imprisoned, or worse. But when Haugen blows the whistle on Facebook, she’s given a red carpet rollout, a legal team, a verified profile on Twitter, and a podium in Congress.

While Haugen may be genuinely concerned about Facebook’s dangerous role on the internet, the establishment’s response proves she is not at all a threat to them as she is not challenging their orthodoxy. In fact, she’s an asset to them.

On the contrary, Ryan Hartwig is a former content moderator for Facebook who wore a hidden camera to expose the bias and censorship happening inside Facebook and his revelations were entirely destructive to Facebook’s future. Instead of a red carpet, legal team, and blue check mark on Twitter, Hartwig found himself on the receiving end of mass censorship. In fact, Twitter permanently banned him for life! See how that works?

To assess the reality of this current situation, TFTP reached out to Hartwig to get his input. Hartwig tells TFTP that he thinks Haugen is a legitimate whistleblower but says the way she described her experience likely played a role in how she was treated by the establishment.

“It is fascinating how the red carpet was rolled out for her, and I think it’s mainly because she was able to mention January 6th and blame it partially on Facebook. This is the most preposterous thing I’ve heard, because I personally raised “civil war” and “boogaloo” trends to Facebook, so they were keenly aware of any political movements on the right and were taking action against conservatives on a daily basis,” Hartwig told TFTP.

“I think she genuinely believes that Facebook should save society. She describes working with past Silicon Valley companies, so I think she’s been in that leftist cultural bubble of groupthink for so long that she can’t comprehend opposing viewpoints in a clear manner,” he said.

While the issue is far deeper than left versus right, the end result will end up benefiting the establishment as a whole — especially the current one who seeks massive bipartisan control over the digital world.

This clearly benefits Facebook, because she said in her testimony they only delete about 3 to 5 percent of the violent content on Facebook. This clearly means in order to be more “effective” they would have to hire more content moderators and expand their online presence even more.

Since Haugen’s testimony, Facebook, the rest of Big Tech, and the US government have all moved toward establishing “rules for the internet,” as espoused by Pietsch above. When TFTP asked Hartwig about these rules, he pointed out how dangerous they would be and used logic and reason to highlight the futility of such an endeavor.

First of all, the internet is always going to be dangerous for humanity, so there’s no way for Facebook or the government to “save society” from the internet. Parents and families need to step up and protect their children and teenagers from these apps and devices.

It’s definitely bad for any future “rules for the internet” to be determined by an unelected commission similar to the FCC. If government didn’t have the gumption or power to get rid of the largest anti-trust violations in the history of our country (Google and Facebook), then we know who’s calling the shots. The government may be making the rules but they are beholden to Big Tech lobbyists.

For all of the bad that has come from the internet, namely pornography, the Dark Web, the sale of drugs, human smuggling, we know that evil in humanity has always existed. And now we believe that a few rules from compromised politicians is going to fix evil in the world? This is a ludicrous premise.

Unfortunately, these rules are already being pushed by elected officials beholden to the lobbyists, as Hartwig describes. Since Haugen’s testimony, Sen. Kirsten Gillibrand began openly advocating for a “Data Protection Agency.”

TRENDING: Almost 2/3 Of Americans Have Given Up On Political Parties Citing Corruption In Government

Given the reality of the United States’ current corrupt regulatory nightmare that is the FDA, CDC, FCC, SEC, EPA, OSHA, NRC, FDIC, and so on and so on, adding the DPA would be yet another nail in the coffin that is the dwindling hourglass of American freedom.