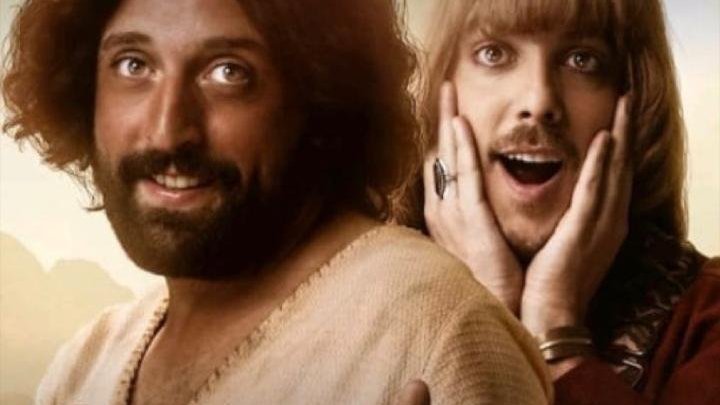 In the Communist-driven politically correct society we are living in, it’s rare to find people with convictions that actually stand up and say what needs to be said and then stand by that with actions. More than 2.1 million people have signed a petition to ban a new Netflix produced film, “The First Temptation of Christ” by makers of the Brazilian comedy show “Porta dos Fundos,” which depicts Jesus the Christ, the Son of God and the One that gave the law condemning all forms of sexual activity outside of marriage including sodomy, as a sodomite.

The Change.org petition came about as a backlash to the advertisements for the film. The petition reads:

In favor of banning the Christmas movie from the “Porta dos Fundos” (“Back Door”) which is titled “The First Temptation of Christ.”

In favor of the removal of the film from the NETFLIX catalog and for the “Porta dos Fundos” to be held responsible for the crime of villainous faith.

We also want public retraction, as they have seriously offended Christians.

Now, consider if this was a film about Muhammad, who though portrayed as anti-sodomy seems to have allowed much concerning sodomy to exist in certain situations even to the point that some of those “virgins” promised in the afterlife include little boys, Muslims would lose their minds and if just a fraction of those signing this petition were Muslims, Netflix would immediately retract the film and apologize.

Why not with Christians?

Instead, we get excuses.

But in an interview with Variety posted Monday, “Porta dos Fundos” co-founder Fábio Porchat said he wasn’t sure what the fuss was all about.

“We play at insinuating that Jesus has a new friend, and probably this new friend is gay, but they have just been having fun and a very good time in the desert for 40 days,” he told the trade publication, adding that perhaps LGBTQ folks themselves should be offended.

(Note: There is a key spoiler in the next paragraph.)

“If anybody should be angry with us, it should be the gay community because a gay character turns out to be the Devil. But the gay community loves us!” he said — though one Decider take has conversely noted that Jesus’ purported boyfriend in the film is “a bundle of swishy stereotypes.”

The program depicts Jesus Christ stumbling into a surprise birthday party thrown by his parents, Joseph and a pot-smoking Mary.

“Jesus, who’s hitting the big 3-0, brings a surprise guest to meet the family,” says the Netflix synopsis for the 46-minute film, which considers what would happen if Jesus were a closeted gay man — and partnered — but with a devilishly twisted ending.

“A Christmas special so wrong, it must be from comedians Porta dos Fundos,” it continues, mentioning the troupe and show (which translates to “Back Door”) that has a history of skewering religion, politics, culture and more.

There is nothing funny about poking fun, and distorting the person and work of the Christ, turning Him into the very thing He opposed both in law and action. In fact, due to his moral perfection, Christ is able to save such sinners as those Porchat and those are joking about, those in the sodomite community.

“For some Catholics here in Brazil, it’s O.K. if Jesus is a bad guy, uses drugs: That’s no problem. The problem is he’s gay. No, he can’t be gay. And that’s interesting because Jesus is everything,” he said. “God is black and white and gay and straight. God is everything. It’s more homophobic to be insulted by a gay Jesus than to make Jesus special.”

No, none of that is true that this man said, and even if there are Catholics, Protestants or other professed Christians that say it’s OK for Christ to be any of that, it does not make it true.

Mr. Porchat is simply lying about the most important person to ever walk the planet, a planet which He created.

“[Netflix hasn’t] said anything to us like, ‘Maybe we should stop making the special available.’ They support freedom of speech,” Porchat said, according to Variety.

Well, of course, Netflix isn’t going to tell them not to make it available. Why should they? They are still getting money for putting out their filth, aren’t they?

If the more than 2.1 million who signed that petition were Netflix subscribers and they pulled their accounts and informed Netflix they were pulling it for that very reason, and many others could be named as well, Netflix would probably get the idea that they should reconsider their endorsement of this film.

As I said before though, if one was to actually do a film on the issue of real sodomy allowed and even promised in Islam, one could expect a quick response, retraction and apology.

Sadly, the antichrist religion of Islam is being more protected and respected in a Christian land than Christianity these days, but King Jesus is not going to be mocked… Netflix is sowing and it’s going to eventually reap.

If you’re even interested in seeing the trailer for this ridiculous filth, it’s below.