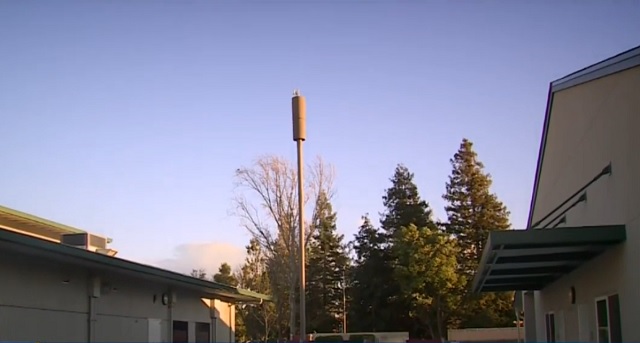 Parents are demanding a cell tower at their children’s elementary school in San Joaquin County, California be removed after four students and three teachers were reportedly diagnosed with cancer.

A fourth child has been diagnosed with cancer at a San Joaquin County elementary school, and parents believe it’s because of radiation caused by a cell phone tower.

[…] “We had a doctor tell us that it’s 100 percent environmental, the kind of tumor that he has,” said Monica Ferrulli.

Her son Mason was the second child to be diagnosed with cancer in just three years at Weston Elementary. He was 10-years-old and walked by this cell phone tower daily.

“People who want the tower removed say four students and three teachers at Weston have been stricken with cancer,” The Modesto Bee reports. “The kindergarten-through-eighth-grade school on Stanley Drive has 400 students.”

I’ve always found it rather strange the way the state loves to install these cell towers directly on top of schools. For the most part, no one wants to put them up in them in their backyard… so they put them on top of our children’s schools instead.