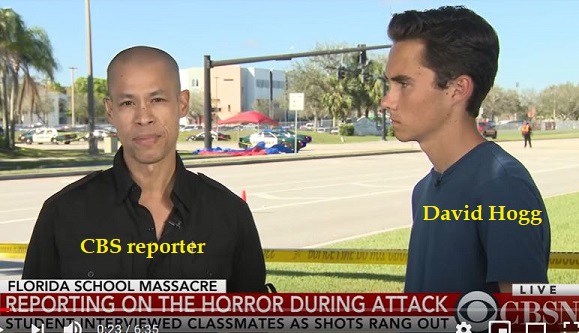 If one part of an event is a lie, the whole event is contrived.

According to the timeline of the Marjory Stoneman Douglas High School shooting on Wednesday, February 14, 2018, in Parkland, Florida:

In a CBS interview with David Hogg, the reporter made clear Hogg was in the school when the shooting began. He hid in a closet, from which he reported liveon the shooting, as well as interviewed other students.

Below is a screenshot of the CBS News video. Note the words at the bottom of the screen: “STUDENT INTERVIEWED CLASSMATES AS SHOTS RANG OUT”.

The video begins with the reporter saying this about Hogg:

“He was in school when the shooting started. His father is a photog, FBI agent, so he [David Hogg] recognized immediately this was a gun, this wasn’t a cracker, this wasn’t a drill. His teacher ushered him into a closet as the shooting was taking place.He thought to himself, if he and his classmates die in this closet, what would their story be, what would we know about them? Here’s what he did.”

What follows, beginning at the 0:26 mark, is a dark screen and Hogg’s voice, presumably reporting from inside the closet. He whispers:

Then a girl’s face appears in the dark:

“Um, I really don’t think there’s anything new to say, but there shouldn’t have to be because if you looked around this closet and saw everyone just hiding together you would know that this shouldn’t be happening anymore, and that it doesn’t deserve to happen anymore.”

The video then cuts away from the girl, still talking, to the CBS reporter resuming his interview with David Hogg.

Who was the girl? And what more did she say?

The video below is the rest of the story that CBS did not air.

The video begins with Hogg asking the girl, “So what’s your message?”, and the girl’s answer:

“Um, I really don’t think there’s anything new to say, but there shouldn’t have to be because if you looked around this closet and saw everyone just hiding together you would know that this shouldn’t be happening anymore, and that it doesn’t deserve to happen anymore. Uhm, and that’s that.”

At the 0:45 mark, Hogg identifies the girl as Alex Vieux. He says:

“Yes, I am okay with you recording this. I personally have rallied for gun rights and less control, not necessarily less control, but this experience has definitely changed my viewpoint. I wanted to be an NRA member. I wanted to learn how to hunt. I was always fascinated by guns as a young girl. But this experience was so traumatizing to me to the point where now I can’t even fathom the idea of a gun in my house or on my body. I did have plans to go to Nexus gun range to learn how to shoot, but at this point I don’t want to even be behind a gun. I don’t want to be the person behind a bullet because I don’t want to be the person to point a bullet at someone. And to have the bullet pointed at me, my school, my classmates, my teachers, my mentors, it’s just, it’s definitely eye opening to the fact that we need more gun control in our country, because for this to happen, and for people to be so neutralized to it. I even texted my sisters, ‘Shooting at my school. I am safe.’ They both responded with, ‘Omg, lol, you’re funny.’ And that’s a problem in society and a bigger problem in America, and it needs to be fixed and I believe the most definite way to fix it is by changing our laws when it comes to gun ownership.”

Recall that when Hogg, hiding in the closet, began reporting live on the shooting, he said “It’s 2:52.” But according to the timeline of the shooting, it was over by 2:28 p.m.

That makes no sense either. Why would Hogg interview Vieux in a closet about a shooting that hadn’t yet occurred?

As Harold Saive points out:

“When you listen to the dialog it’s clear the interview is said to be held while ‘hiding in this closet’…. No case can be made that the interviews were recorded at 9:32 at night since the students were not still hiding from the shooter 7 hours after the last shot was fired. All students had been evacuated, the scene locked-down and the shooter had long been in custody by 9:32 PM.”

The only way that one can make sense of the two discrepancies — (1) Hogg reporting on a live shooting at 2:52 p.m., 24 minutes after the shooting had stopped; and (2) Hogg interviewing Vieux at 9:32 p.m. — is that Hogg’s dramatic video footage in the closet actually took place on the morning of February 14, hours before Cruz allegedly entered Building 12 and shot 17 people dead.

As a matter of fact, there was a fire drill earlier that day in M.S. Douglas High School!

Jim Gard has been a math teacher for 36 years….

Gard’s math class at Marjory Stoneman Douglas High School in Parkland, Florida, was just finishing up a review for a test Wednesday when “the fire alarm went off, which I thought was unusual because we’d just had a fire drill.“

It wasn’t another fire drill, or even a fire. It was far, far worse. Authorities said Nikolas Cruz, a 19-year-old man who’d recently been expelled from the school, had returned to campus and opened fire with an AR-15 semi-automatic rifle.

Not only was David Hogg not reporting live from the closet during the shooting, he wasn’t even in school at the time. This is his own testimony in a TV interview:

“On the day of the shooting, I got my camera and got on my bike and ride as fast as I could three miles from my house to the school, to get as much video and get as many interviews as I could, ’cause I knew this could not be another mass shooting.”

The above video is a segment from the CBS News documentary, “39 Days“.

Hogg’s testimony that he was at home at the time of the shooting also raises this question: “Why was he at home on a school day?”

Maybe the answer is that David Hogg wasn’t/isn’t a student at M. S. Douglas High School.

What about Hogg’s interviewee, Alex Vieux?

This footage then oddly aired after the “live” Parkland incident that afternoon. To make matters more confusing, the individual goes by “Alex Vieux” in the morning, and “Isabelle Robinson” hours later as the same footage is widely broadcast in the aftermath of the event….

The South Florida Sun-Sentinel used a small part of the “Alex Vieux” interview footage in a February 15, 2018 video report (brief excerpt at 4:07 below), referring to the interview subject as “Isabelle Robinson.”

There is another Isabelle Robinson, the daughter of a 9/11 survivor Jennifer Rothschild Robinson.

A heart-wrenching story, published in News.com.au on August 21, 2016, describes Australian photographer Nathan Edwards’ 15-year search for the woman and baby whose photograph he found in the rubble of the collapsed World Trade Center.

Jennifer Rothschild Robinson’s office at Ohrenstein & Brown was on the 86th floor of the North Tower. Luckily, she didn’t go to work that fateful day, September 11, 2001.

15 years later, photographer Nathan Edwards finally met the woman and baby in the photo. The baby, now 16, is named Isabelle Robinson. Below is a picture of Edwards’ happy reunion with Jennifer and her family in their home in Florida.