Watch out, Pres. Trump, it can happen to you! 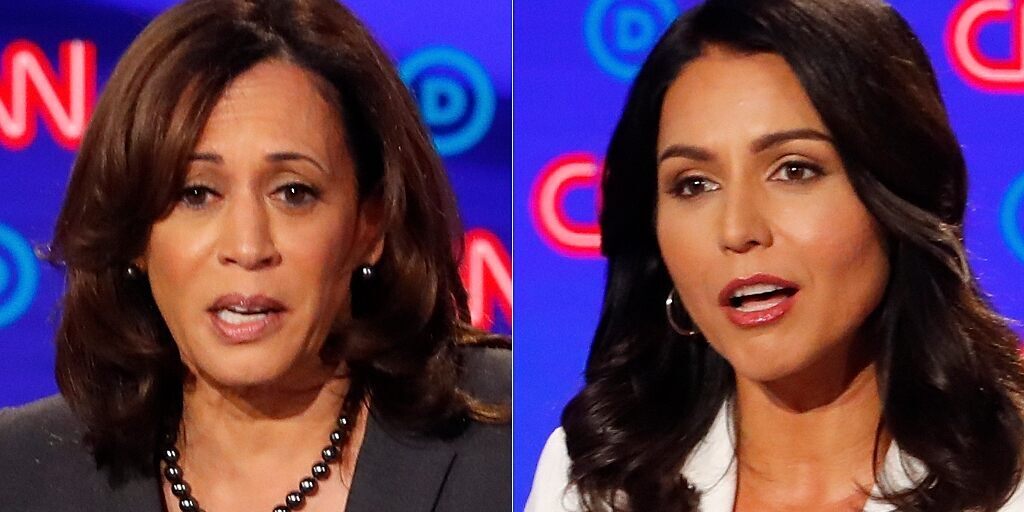 With a brief, but deadly, attack, late in the final quarter of debate number two, Tulsi Gabbard laid bare the lies holding up Kamala Harris’ primary platform, and dropped her support among black voters overnight from 27% to 1%. While Harris’ clear goal in that debate was to take down Biden, Gabbard leaped to his defense and eviscerated Harris with a death of a thousand cuts.

Joe Biden had been top dog in “Most searched Democrat Candidates” across the United States before Debate II, but the next day saw Gabbard totally eclipse public interest in the former VP. Gabbard’s star power was undeniable, her stage presence looked presidential.

Gabbard’s anti-war message in the first debate resonated with the national audience. Here was a former soldier, with combat experience, attacking Pres. Trump and his pro-war cabinet for wasting billions of dollars that could be spent on needy citizens. She stood out in the crowd and gained momentum with viewers.

At a critical juncture two days after Debate I, when her campaign was catching on fire with the donor base, Google shut her down by suspending her ad account for alleged fraudulent activity. Gabbard quickly filed a two-million-dollar lawsuit. Candidates have a short window to qualify for debates by meeting stringent donor requirements, and Google’s suspension cut into that effort precisely when it would do the most damage. Gabbard’s campaign also asserted that Google had tweaked it’s Gmail algorithms directing her campaign messages into the recipient’s spam folder.

Not to be outdone by the G-Men, Twitter suppressed Gabbard from US Trending Topics, even though she was trending at 10thplace worldwide. You just can’t get any more blatantly political than that. By making her invisible, Twitter created the impression that no one was really interested in her, thus affecting her polling numbers.

After taking Establishment fav Kamala Harris down, the sharks began to circle, spreading a… wait for it…Russia collusion message. According to “unnamed sources” it was Russian bots who were providing all the activity on her Twitter account. Harris parroted these accusations, smearing the only decorated US military veteran on the debate stage.

When Gabbard’s campaign was catching on fire, social media giants and stooges for the NYT were ready with a bucket of water. Their combined efforts couldn’t suppress her funding drive, but it did keep her from meeting the criteria of polling at 2% in the DNC selected polls. Forget the fact that Tulsi Gabbard polled at or above that number in 26 polls, many of them rated higher than the ones selected by the Democrat establishment. Gabbard handily met the donor requirements, thanks to her growing popularity across the nation.

Now Gabbard is out of Debate III and Kamala Harris can relax. There will be no truth bombs.

President Trump, pay attention. If you don’t cut these social media crooks off at the knees before 2020, you and Tulsi will have something to talk about after the next election.

David Brockett is a Vietnam veteran, former USMC officer and pilot. As a civilian, he worked in healthcare as a counselor and hospital administrator. He also writes articles on politics and current events. He and his wife divide their time between their home state of Texas, and Idaho.

Former DNI John Ratcliffe confirms that China, not Russia, had a very large role interfering with our 2020 election

Alert: They Are Going To Try To Ban Donald Trump From Running For President For The Rest Of His Life