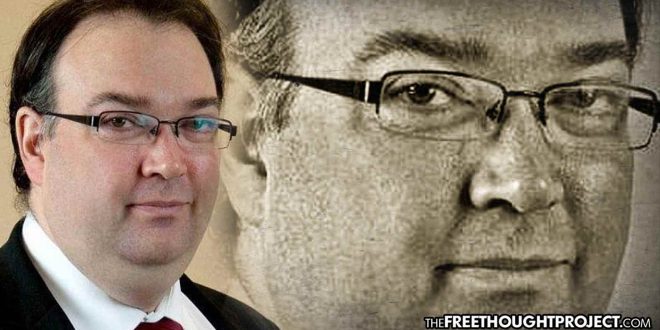 On a regular basis, members of government — a government we are told exists to protect society from chaos — are caught preying on society’s most vulnerable. From heads of state to low level cops, child abusers are rife within all the ranks. All too often, when these child abusers are caught, despite overwhelming and often horrifying evidence, they walk free because of their politically connected status. This is exactly what happened with city councilman Roger Spackman.

According to authorities, Spackman was part of an underground internet network called The Other Place. In 2017, a police investigation found Spackman in possession of over one million images and videos at his home on a whopping 68 different electronic devices.

Judge Peter Johnson, of the Exeter Crown Court in England, where Spackman lives, noted that this was ‘an astonishing number’ of images and videos. Despite the judge admitting to the utterly shocking nature of Spackman’s crimes, he let him walk free.

Johnson sentenced Spackman to prison for ten months, however, that sentence was suspended. Instead, Spackman walked out of the courtroom a free man with just 40 days of rehab for possessing the “huge number of images.”

Not only is the system refusing to put this child predator away for a long time like he deserves, they actually praised his work in government while doing it.

The judge told the court that Spackman was a man of good character working hard in public service as a councilor in Exeter before his “fall from grace which has been dramatic.” He then went on to call Spackman the victim and blame the possession on images on the people who sent them to him, not Spackman.

The judge said Spackman had been abused as a child and played the role of an abused child in this forum. Apparently, this is what Spackman used as his defense — and it worked.

“He likes to pretend he is a young girl who will be abused. He will pretend to be a young girl,” the pedophile’s attorney, Barry White said.

“None of the images are of people who he knows. He has never sexually assaulted any children nor would he do so,” he said. “The images were sent to him by the other party in the fantasy which were indicative of what that person liked. He did not get to choose what images but he accepted them all.”

Not knowing the children being abused in child pornography is no defense against possessing it. This is utterly asinine. However, likely due to the fact that Spackman has been “working hard in public service” for so many years, the court lapped it up and let the child predator walk free. Shameful indeed.

As the Free Thought Project has previously pointed out, pedophilia among the elite is rampant. The problem has gotten so bad in England that officials issued an order in 2017 to stop naming streets and landmarks after local heroes and politicians because they could later be exposed as pedophiles.

Also in 2017, the Free Thought Project reported on the fact that the police chief came forward and confirmed that the former Prime Minister of England, Sir Edward Heath, had raped dozens of children. The department also noted how those within the government helped cover up these crimes.

We also reported on the massive child sex ring that was blown apart in Norway. That investigation quickly led to arrests of “51 people, all men, (who) are so far involved in the case. 24 of them come from Hordaland and Sogn og Fjordane. 26 come from other areas of Norway, from Southeast to Finnmark in the north. Among the accused offenders, there is also one Swedish national. Two politicians, one Labor politician from Oslo and a former national Progress Party (FrP) politician from Eastern Norway are involved in the case.” One is also a kindergarten teacher, and four of the 51 arrested were perpetrators in the video evidence collected.

Domestically, these higher level arrests are few and far between as any time ‘the elite’ are mentioned alongside the term ‘pedophile,’ the Praetorian guard, aka the corporate media, shout down all those who dare pose any questions.

However, even though the media won’t report on it, these disgusting child predators are so vile they are hard to ignore.

It’s not just those in government who get off with no jail for their horrifying crimes — their family members are given this privilege too.

As TFTP reported in June, John Paul Doerr III, 34, of Butler County, Pennsylvania, pleaded guilty to exploiting children through possessing and distributing a massive amount of child pornography — some of which involved infants. He was facing upwards of 250 years in a cage for the whopping 45 felony counts against him.

However, Doerr happens to be the son of Butler County’s top judge, Thomas Doerr. So, instead of going to jail for the rest of his life, as he should have, Doerr did not go to jail at all. Instead this child predator was sentenced to five years probation, six months house arrest and 15 years on the Megan’s Law registry. According to the sentencing judge, Timothy Creany, the house arrest will be lifted if Doerr gets a job.

Though child abuse like this is also rampant among the citizen population, it is the politically connected who enjoy wrist slaps for their abuse which must be brought to an end.