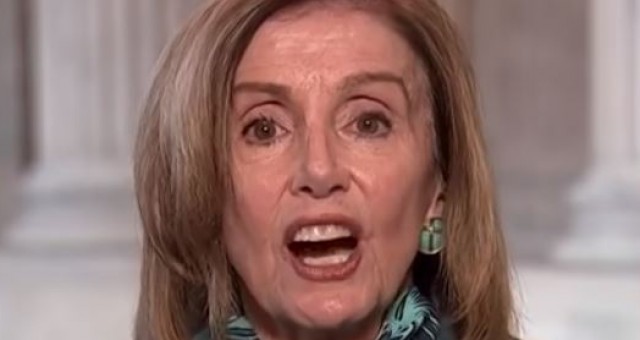 Monday on MSNBC’s “Live,” House Speaker Nancy Pelosi (D-CA) referred to President Donald Trump and his Republican allies as “enemies of the state.”

Breitbart reports that Pelosi said, “One thing I’ll say to the American people, don’t pay attention to Donald Trump. It’s his goal to scare people from voting, to intimidate them by saying he’s going to have law enforcement people at the polls. To welcome, in fact, Russia intervention into our election, letting Putin decide who will be President instead of the American people. But ignore him because his purpose is to diminish the vote, to suppress the vote.”

It would be laughable if it wasn’t for the fact that people actually listen to her when she is sober enough to put together the words to coherently talk. Look, we all know that our voting system has been corrupt for years and that if the Democrats get their way with the mail-in ballots, it is just another form of corruption to push Biden and Harris into winning the election.

“We take an oath to protect and defend the Constitution from all enemies, foreign and domestic. And sadly, the domestic enemies to our voting system and honoring our Constitution are right at 1600 Pennsylvania Avenue with their allies in the Congress of the United States. But again, let’s just get out there and mobilize, organize, and not let the President deter anybody from voting. And again, support the postal system, which is election central. They’re doing everything they can, suppress the vote with their actions, scare people, intimidate by saying law enforcement will be there, diminish the role of the postal system and all of this. It’s shameful, enemies of the state.” ~ Pelosi

The real enemies of the state are corrupt politicians like herself, until We The People get tired of suffering at the hands of the greedy and blatantly evil members in congress, it will just continue to get worse.