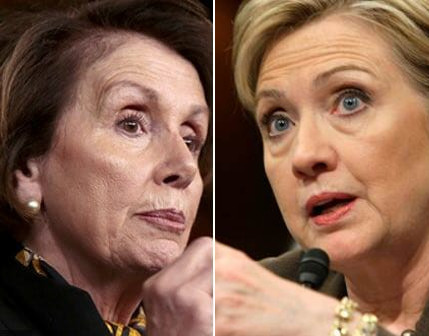 On Thursday, both House Speaker Nancy Pelosi and the woman that President Donald Trump promised the American people he would tell his attorney general to appoint a special prosecutor, Hillary Clinton, spent their day informing those who have deportation warrants from the federal government on how they may avoid the raids of Immigration and Customs Enforcement agents that is scheduled to take place in ten cities this weekend.

“An ICE deportation warrant is not the same as a search warrant,” Pelosi said, reading from a prepared card.

“If that is the only document ICE brings to a home raid, ICE does not have a legal right to enter a home,” she said.

She went on to read, “ICE agents don’t have a warrant signed by a judge, a person may refuse to open the door or let them in.”

“An administrative order of removal from ICE or immigration authorities is simply not enough,” she concluded.

As for Hillary, she took to Twitter to offer her advice of taking video of ICE agents and to remain silent and obtain an attorney.

To be fair, all men have these right to be silent. It isn’t just citizens. No one can point to that in the Constitution. If you can, please cite Article, Section and Clause, but instead, we see that written in the Fifth Amendment.

The government must follow the law when they are seeking to deal with those who break the law.

Clinton then went on to tweet, “The Trump administration is preparing sweeping raids on undocumented people as the president threatens to go against the Supreme Court and demand citizenship information through the Census. Weaponized fear and bigotry are the central projects of this administration.”

The Trump administration is preparing sweeping raids on undocumented people as the president threatens to go against the Supreme Court and demand citizenship information through the Census.

Weaponized fear and bigotry are the central projects of this administration.

Though President Trump has apparently dropped the plan to pursue a citizenship question for the 2020 census, he claims to be considering an executive order to direct every federal agency to provide the Commerce Department all records and “all requested efforts” that might be able to determine how many citizens and non-citizens are living in the US.

The details of the raids by ICE apparently are targeting 2,000 alleged illegal immigrants, who have been ordered to be deported, many of them due to the fact that they did not appear in court but are living in the US.

I’d suggest that many of those are the same people that the same administration released by the hundreds of thousandsjust like the previous administration.