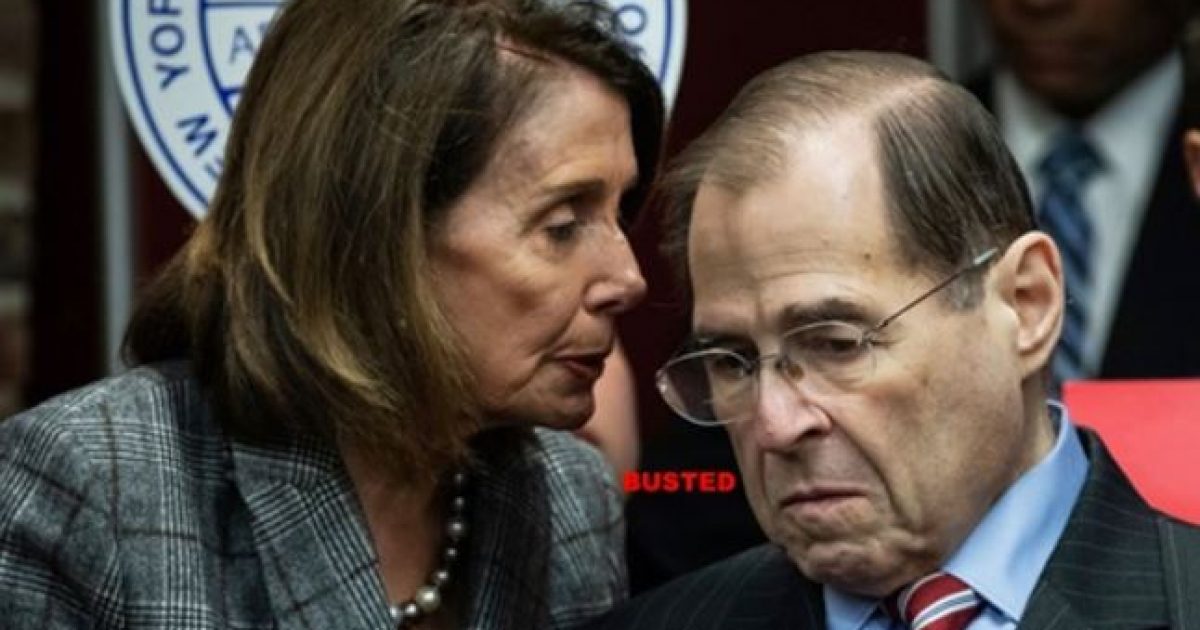 Speculation, Analysis & Opinion of Kirsters B| House Judiciary Committee Democrats indicated in a Monday court filing that they have been working on an impeachment probe of President Donald Trump since before special counsel Robert Mueller even submitted his report. This seems to contradict previous comments made by committee chairman New York Democrat Jerry Nadler and California Democratic House Speaker Nancy Pelosi.

Earlier in August, Nadler claimed that “formal impeachment proceedings” were beginning as he filed “a petition to get secret grand jury information from the Mueller report. But Monday’s filing in a separate case looking to compel testimony from former White House counsel Don McGahn suggested that it had already started on March 4 — weeks before Mueller sent his report to Attorney General Bill Barr on March 22,” according to Fox News.

“On March 4, 2019, the Judiciary Committee opened an investigation into ‘threats to the rule of law,’ encompassing alleged obstruction of justice, public corruption and other abuses of power by President Trump, his associates, and members of his Administration,” the filing stated, going on to say that “one critical purpose of the Committee’s investigation is to determine whether to recommend articles of impeachment against the President.”

However, Mueller and The Office of the Special Counsel did not file their report until March 25th.

The motion filed on Monday pushed for a summary judgement or preliminary injunction, which would force McGahn to testify.

He has refused to testify previously when served with a committee subpoena, insisting that he has immunity.

According to Fox News, “The March 4 date is in line with an Aug. 1 op-ed for the South Florida Sun-Sentinel by Rep. Ted Deutsche, D-Fla., but it is in stark contrast with previous claims from the Democratic leadership.”

The Washington Post published an interview on March 11th in which Nancy Pelosi said, “Impeachment is so divisive to the country that unless there’s something so compelling and overwhelming and bipartisan, I don’t think we should go down that path, because it divides the country.”

Monday’s court filing reveals that Democrats had already been making moves in this direction a week before the interview was released.

It was early August when Nadler first told CNN that “formal impeachment proceedings” were taking place, at the same time that he was initiating the case for the secret grand jury material. In May he said during a WNYC radio appearance that “there certainly is” justification for Congress to begin impeachment proceedings against Trump, but that it was critical for the American public to agree before launching the process.

“We’re going to have to have the investigation,” Nadler said in response to a question from a caller, adding that he was going to talk to colleagues about the possibility of a formal impeachment inquiry.

In May, Nadler was sure to note the difference between a “formal impeachment inquiry” and “holding hearings outside the context of a formal inquiry,” according to Fox.

Nadler made note of “functional differences” between “holding hearings in an official impeachment investigation and doing so without one, including ‘legal powers that we wouldn’t have without it,’” Fox explains.

Keep up to date with this story by checking back for updates.

Note that we are assuming Pelosi knew about this. As Speaker of The House and essentially leader of the party, I think she must have been aware. It looks to me like she and Nadler and trying to the good ol’ “good cop, bad cop’ routine.