Uncle Remus told the story about Brer Rabbit and the Tar Baby. With typical arrogance, Brer Rabbit confronts a baby molded from tar and set as a trap in the middle of the road by his nemeses, Brer Fox. 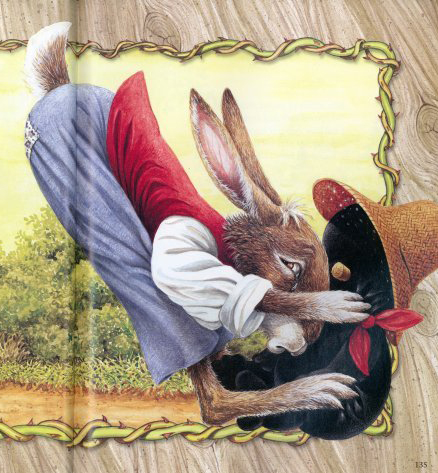 When the Tar Baby won’t talk to Brer Rabbit, he decides the baby doesn’t have a right to ignore him and block that road. Brer Rabbit punches the Tar Baby in the head. His fist gets stuck, so he then punches him with the other fist and kicks and head-butts until he is stuck tight. When he can’t get away, Brer Fox comes out of the bushes and laughs and laughs at old Brer Rabbit who didn’t know when to quit a losing battle.

Clearly a student of Uncle Remus, it seems that President Trump has molded his likeness into tar and set it in the path of Speaker Pelosi and her lieutenants. Swinging with abandon, Pelosi and the other two stooges, Schiff and Nadler, can’t do anything now but continue to struggle with this sticky lump of resinous hydrocarbons.

Add to that, the match being televised for the whole world to see, and the opportunity for extracting themselves with some semblance of dignity is long gone. So, why do they continue to struggle–is there a plan? This has become a deathmatch, and President Trump isn’t even in the ring.

One might wonder what would lead a career politician, with years of experience, to mire her entire political party in such a mess. I have some notions, and I bet you do too. If I miss one, leave it in the comments below. Unlike Brer Rabbit, I’m willing to learn!

Let’s begin with hubris. Meriam Webster defines this trait as: exaggerated pride or self-confidence. With decades of media fawning and political donors throwing millions of dollars at her reelection campaigns, it’s no wonder Madame Pelosi has more than a tinge of narcissism. Plus, you can’t subject yourself to that much reconstructive surgery and not fall in love with your own reflection. No matter how many stuttering, stumbling incidents that have been caught on camera, no one in the media dares to notice. The Empress has no wrinkles!

Despite her loyal minions in the press, even the MSM hasn’t been able to put lipstick on this impeachment tar baby—based on recent polling data anyway. They’ve been flailing away for months now with no positive results.

So, what is behind this kamikaze attack?

Smart money is on the three stooges, Pelosi, Schiff, and Nadler, trying to set up a smokescreen to preemptively block out the upcoming headlines from the IG’s report on FISA abuse. Knowing that their pals in the media will cooperate in this subterfuge by running with any story they’re given, this unholy trinity has been willing to advance the craziest notions based on leaked, half-sentences from biased witnesses and super-secret invisible whistleblowers.

It’s a good theory, and certainly credible, but the impeachment full-court press began before the FISA investigation picked up steam, and certainly before anyone knew for certain a criminal investigation would follow. Something else had to be going on to precipitate this self-immolation by Speaker Pelosi.

And there was—two things, actually.

The “other” three amigos, AOC, Tlaib, and Omar were suddenly setting the Democrat narrative, daring to take on Madame Pelosi in the media. Here we had three young fresh faces pointing their fingers at the political old guard and saying, “Ewww!” The media loved them because they were “disenfranchised” minorities willing to take on the tired old carcasses normally hogging the microphones. In the media’s collective mind, even AOC’s gaffs made her seem innocent and naive, in a lovable kind of way–she was a younger version of Pelosi

Pelosi, Schiff, Nadler, and Hoyer could hardly compete, face-to-face with these young beauties plus these newcomers were pulling the party radically to the left, at a time when they needed to be moving toward the middle. With a successful conservative president and a booming economy, this was no time to be out of sync with the electorate.

Time and again, Speaker Pelosi had to answer for these young guns, and explain how the party would accommodate their ideas. This adolescent unholy triumvirate had become the puppet masters and she was dancing to their tune. Pelosi tried threats, and to cajole, and even to scare them by leaking that the DNC might fund someone to run against them in the primaries.

She needed a plan

With no opportunity to establish her own narrative, or to assert herself as the real leader of her party, Speaker Pelosi needed something that would force the media to shift their attention to her; give them something juicier to write about—something they craved: “Impeach the Orange Man!” And since the impeachment clown show began, you may have noticed a serious drop-off in stories covering the young guns, at least as challengers to Pelosi’s leadership. Mission accomplished!

Pelosi’s other problem had to do with the 2020 crop of presidential contenders. Being consummate politicians, they noticed the attention AOC and her tribe had garnered with their loony-leftist ideas, and they literally ran over one another trying to craft the most liberal narrative on the debate stage. Bernie Sander’s heart condition may have been triggered by the wild-eyed mob stampeding towards his well-entrenched left-most position.

Suddenly, Speaker Pelosi was being asked to explain the new socialist platform of the Democrat Party. From the sidelines, President Trump was taking every opportunity to label his opposition as communist-leaning socialists. No one on that debate stage, including the mostly-moderate Uncle Joe Biden and Lizzie Warren, dared to even point a toe towards the political middle ground. Speaker Pelosi had lost control of the Party platform and had to watch in horror as her best candidates contorted themselves to fit the new Democrat image.

It wasn’t enough to just shut down the three amigos

Speaker Pelosi had to find a way to take the spotlight off the Democrat presidential candidates at a time when millions of dollars were being invested and national attention was essential. She needed the people on that stage talking about something other than the Green New Deal or other hair-brained leftist schemes Trump could make fun of. On top of that, none of her candidates were polling that well in hypothetical match-ups with President Trump.

Something radical had to happen; something with legs that would carry the news cycle beyond the Democrat primaries, and muffle the sounds of AOC and her gang. She needed to find a way to impeach Trump, and drag out the process for as long as possible. Even if the impeachment wasn’t successful, they could at least run out the clock until they had one presidential candidate they could reprogram and repackage.

Even the embarrassing spectacle of being stuck to a tarred grinning likeness of Trump was better for Pelosi than the humiliation of being publicly unseated as Speaker, or the Democrat Party being branded forever as socialist. Fortunately for her, she had two fellow stooges who believed the tar baby was getting tired.