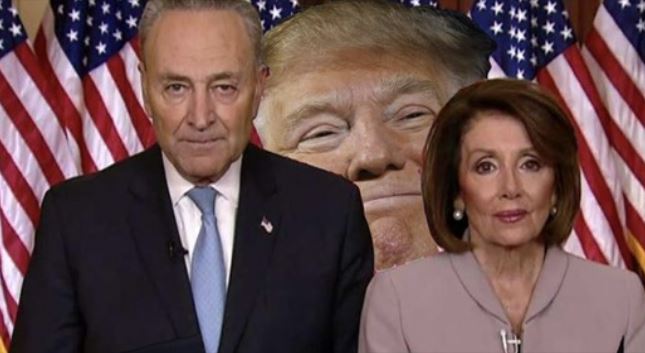 Opinion| Lawrence David – An informal poll of House Republicans suggests they are unanimous in their opposition to tomorrow’s scheduled vote to officialize Democrats’ one-sided sham impeachment process. The same cannot be said of Democrats.

(CTH) …What Pelosi/Schiff et al have assembled is a format for a highly controlled public spectacle prior to a predetermined transfer of evidence to Jerry Nadler (Judiciary). With the intent to construct a pantomime for public absorption in mind, the rules are written for maximum narrative construction. [ex. Lawfare lawyers will question witnesses]

-The Executive Branch will not be permitted to participate in the open HPSCI hearing.

-President Trump lawyers will not be permitted to question witnesses in the open HPSCI hearing.

-Ranking member of HPSCI (Nunes) may have subpoena power subject to pre-approval by Chairman Adam Schiff. Requests must be made in writing. Chair is not mandated to approve.

-Ranking member of HPSCI (Nunes) may have ability to request witnesses subject to pre-approval by Chairman Adam Schiff. Requests must be made in writing. Chair is not mandated to approve.

-Schiff (Chairman) and Nunes (Ranking member) will each have 90 minutes (aggregate) to question any witness brought before the committee. All other committee members will have 5 minutes each, per witness. [Remember this is a member assembly of 3 committees]

-The Chairman can allow contracted legal staff (Lawfare) to question witnesses, as part of his 90-minutes of available questioning.

-The Chair is authorized, though not required, to make depositions public.

-Upon completion of the hearing(s), the HPSCI chairman shall write a **report to the Judiciary (Nadler) with instructions of findings. The chair may include dissent from the minority opinion therein.

-House Dems who won election in 2018 in districts that Trump carried in 2016 are faced with what may be a career-ending decision. Pelosi can afford 18 defections from among the 40 Dems facing this conundrum.

So far, roughly a dozen House Democrats appear to be lining up in opposition to the impeachment inquiry. That number is likely to go up as additional swing state Democrats hear from their constituents.

House Majority Whip Steny Hoyer (D-MD) told reporters on Capitol Hill: “We’re going to have to consider whether or not it’s ready to go on Thursday. I hope that’s the case,” an indication that the number of defections may be significant enough to put the vote at risk of failing.

Recent polls seem to suggest that the secretive hearings have turned voters off.

A poll conducted by the Marquette Law Poll of Wisconsin voters, found support for impeachment underwater by 7%. Fifty-one percent say Trump should not be impeached and removed while only 44% say he should be removed.

(Breitbart) The New York Times Upshot/Siena College Poll of voters in six key battleground states–all won by Trump in 2016–shows impeachment and removal from office is unpopular in Pennsylvania, Michigan, Florida, North Carolina, and Arizona, as well as Wisconsin. By a ten point margin, 53 percent to 43 percent, voters in these six states oppose the impeachment and removal from office of the president.

We know their districts, have the data of the voters we need, and will have 100s of millions of dollars to find them and turn them out.

Nancy has never fought a machine like we have. She is old school and we are working with tools she doesn’t even understand. #AskHillary https://t.co/sjwRoCXg11