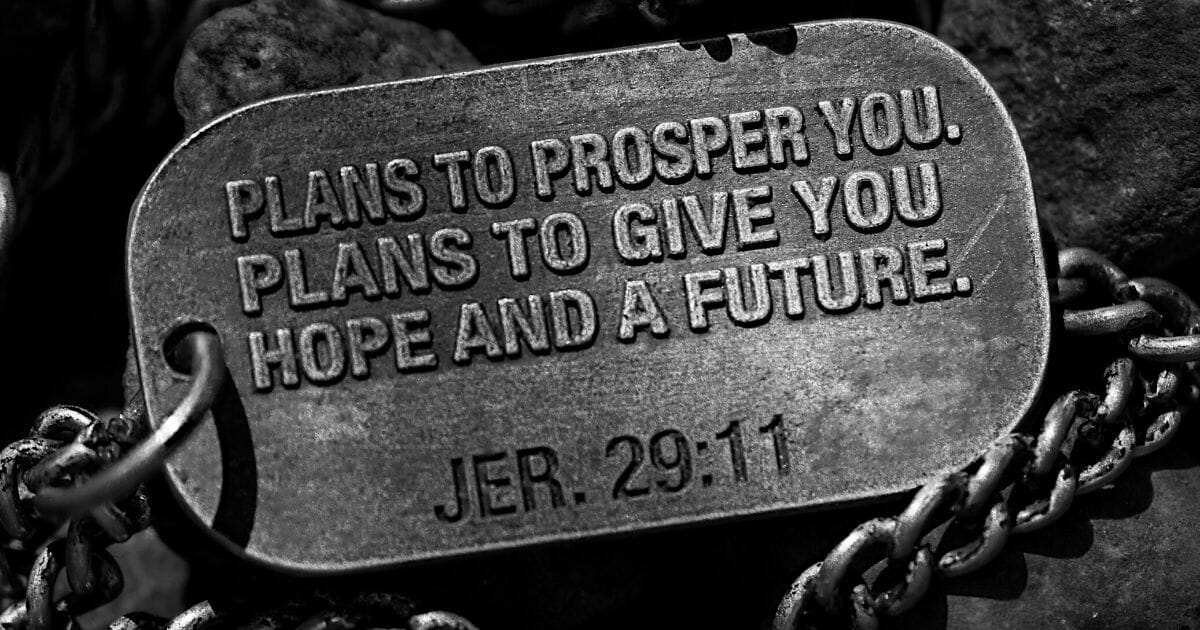 The Pentagon caved in to (((Mikey Weinstein))) of the atheistic Military Religious Freedom Foundation (MRFF) again.

Caleb Parke reports for Fox News, Dec. 3, 2019, that for the past 20 years, U.S. military members have been able to wear dog tags with Bible verses on them, giving them light and hope in some of their darkest times. For some Gold Star families, this is one of their most cherished possessions to remember their loved one who gave the ultimate sacrifice.

Founded by Kenny Vaughan in 1998, Shields of Strength is a Texas-based company that makes Christian jewelry, beginning with a dog-tag with a Bible scripture which Vaughan had made for himself. The company now makes dog-tags with Bible verses for military members and their family, as well as other Christian-theme jewelry and apparel.

After Fox News reported on Shields of Strength last July, Weinstein complained to the Department of Defense (DOD), demanding the DOD ban the Bible verses dog-tags. “Soon after,” each military branch pulled or threatened to pull the trademark licenses that had been issued to Kenny Vaughan from Shields of Strength.

Berry, a Marine Corps combat veteran who served in Afghanistan, told Fox News: “Just when I didn’t think Mikey Weinstein could stoop any lower, he pulled a stunt like that. He’d rather take it away from them just to raise his own publicity than support our service members … that’s pretty cowardly and that’s cruel.”

Vaughan said he’s seen soldiers, who have to leave their Bible behind, carry their Shields of Strength dog-tags with them; oftentimes, the soldiers would stand in line for hours just to get one: “The love of Jesus changed my life forever. It’s the most valuable thing I have to offer anyone is God’s Word. No one needs it more than a young man or woman fighting for our freedom and we’re going to fight for them.”

An acquaintance of mine who’s a Constitutional Law attorney, says:

“While I would absolutely oppose the military issuing such tags (even with a request from the servicemember) it is outrageous that servicemembers can’t voluntarily inscribe their own tags. From a legal point of view, if the military allows any inscriptions at all (like “I Love Mom”) then banning religious ones is content discrimination. That triggers strict (constitutional) scrutiny.”

Meanwhile, on January 16, 2020, President Trump followed through on his promise to the Evangelicals for Trump rally in Miami on January 3 to “safeguard students’ and teachers’ First Amendment rights to pray in our schools” through a directive from the Department of Education.

As reported by the AP and Christianity Today, the Department of Education issued a guidance on school prayer, the first updated guidance since 2003. The directive orders states to verify that school districts have no policies limiting constitutionally protected prayer, refer violators to the Education Department, and provide ways for making complaints against schools.

From the Department of Education’s press release of January 16, 2020:

[F]or the first time since 2003, the Department will …issue today updated guidance on constitutionally protected prayer in public elementary and secondary schools. The Department is required by the Elementary and Secondary Education Act of 1965 (ESEA), as amended by the Every Student Succeeds Act, to update this guidance every two years. The guidance explains the ESEA’s requirement that states report which local educational agencies have not certified that they do not have any policy that prevents, or otherwise denies participation in, constitutionally protected prayer. The ESEA also requires states to report complaints against a local educational agency that allegedly denies a person, including a student or employee, the right to engage in constitutionally protected prayer. The guidance clarifies that the ESEA requires states to provide a clear process for students, parents, and teachers to report violations of their right to pray. Under the ESEA, states must fulfill these reporting requirements by November 1 of each year.

Christianity Today reminds us that public schools have been barred from leading students in classroom prayer since 1962, when the Supreme Court said it violated a First Amendment clause forbidding the establishment of a government religion. Later decisions extended the ban to school graduation ceremonies and, under certain circumstances, school athletic games.

Civil liberties groups say the firewall protects religious minorities and ensures fair treatment of all faiths. But many Christians say courts and schools have pushed too far against the right to free religious expression. Surveys find that Americans remain largely in favor of prayer in public schools: