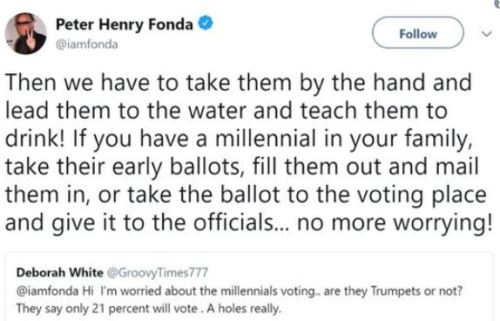 It is a federal crime, USC 18.41 Sec. 875(c), punishable by up to 5 years in prison and a fine of up to $250,000, to transmit any communication containing a threat to injure the person of another, via the Internet (including Twitter), e-mail, telephone, beepers, and other means of communication.

On June 20, 2018, in a series of tweets (since deleted), actor Peter Fonda called for putting President Trump’s 12-year-old son, Barron, into a cage with pedophiles:

In a tweet on August 4, 2018, in response to a correspondent who is worried about millennials voting in the upcoming midterm elections, Fonda (@iamfonda) tells Demonrats to fill out mail-in ballots for young people in their families, which is a felony:

Then we have to take them by the hand and lead them to the water and teach them to drink! If you have a millennial in your family, take their early ballots, fill them out and mail them in, or take the ballot to the voting place and give it to the officials… no more worrying! https://t.co/wiDXP9sl60

Fonda has since deleted the tweet, but not before enterprising netizens took a screenshot of his tweet:

According to a Reuters/Ipsos national poll in January 2018, enthusiasm for the Democrat Party is waning among millennials.